“I cannot imagine a God who rewards and punishes the objects of his creation, …Neither can I believe that the individual survives the death of his body, although feeble souls harbor such thoughts through fear or ridiculous egotism.
~ Albert Einstein, as quoted in his New York Times Obituary, April 19, 1955) 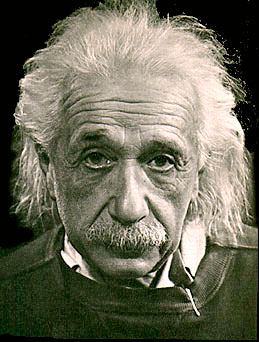 Albert Einstein was not only a great scientist but a wise philosopher and a pragmatic “true mystic” … “of a deeply religious nature.” (New York Times Obituary, April 19, 1955)

Einstein did not believe in a formal, dogmatic religion, but was religiously and reverently awed and humbled with a cosmic religious feeling by the immense beauty and eternal mystery of our Universe.

He often commented publicly on religious and ethical subjects, and thereby he became widely respected for his moral integrity and mystical wisdom, as well as for his scientific genius.

In an essay collection entitled The World As I See It, first published 1933, Einstein explained his reverence for God as Eternal Universal Intelligence. But he rejected prevalent religious ideas of individual survival of physical death, reincarnation, or of reward or punishment in heaven or hell after physical death. He said:

On learning of the death of a lifelong friend, Einstein wrote in a March 1955 letter to his friend’s family:

“Now he has departed from this strange world a little ahead of me. That means nothing. People like us, who believe in physics, know that the distinction between past, present, and future is only a stubbornly persistent illusion.”

Einstein’s rejection of afterlife contradicted many religious teachings and credible experiential accounts of individual afterlife and reincarnation. But it was consistent with Einstein’s revolutionary scientific paradigm and with highest non-dualistic Eastern religious teachings, the most ancient extant of which is Hindu Advaita Vedanta philosophy.

Einstein revolutionized Western science with his 1905 groundbreaking theory of relativity that “mass and energy are both but different manifestations of the same thing”; that there was an equivalence between all matter and energy in the universe, quantifiable by the simple equation e = mc2. On his arrival in New York in 1919, Einstein summarized his theory of relativity in the single sentence:

“Remove matter from the universe and you also remove space and time.”
Clark R.W., Einstein: His Life and Times (1973)

Though Vedic rishis or seers had anticipated Einstein by millennia, their teachings were largely unknown in the West until shortly before Einstein revolutionized Western science. The ancient Vedic Advaita teachings were first brought to large Western audiences by Swami Vivekananda – who came to the West as Indian delegate to the 1893 Parliament of World Religions.

Vivekananda, who was principle disciple of nineteenth century Indian Holy Man Sri Ramakrishna Paramahansa, eloquently explained that according to Advaita philosophy this impermanent and ever changing world is an unreal illusion called maya or samsara; and, that “all that we see or seem is but a dream within a dream”…

In an eloquent New York City lecture called “The Real and the Apparent Man”, he equated maya or samsara with “time, space, and causation” and presciently predicted scientific confirmation of the ancient Vedic non-dual philosophy of One Infinite Existence. He said:

“According to the Advaita philosophy, ..this Maya or ignorance–or name and form, or, as it has been called in Europe, time, space, and causality–is out of this one Infinite Existence showing us the manifoldness of the universe; in substance, this universe is one. So long as any one thinks that there are two ultimate realities, he is mistaken. When he has come to know that there is but one, he is right. This is what is being proved to us every day, on the physical plane, on the mental plane, and also on the spiritual plane.

“What then becomes of all this threefold eschatology of the dualist, that when a man dies he goes to heaven, or goes to this or that sphere, and that the wicked persons become ghosts, and become animals, and so forth? None comes and none goes, says the non-dualist. How can you come and go? You are infinite; where is the place for you to go?

“So it is with regard to the soul; the very question of birth and death in regard to it is utter nonsense. Who goes and who comes? Where are you not? Where is the heaven that you are not in already? Omnipresent is the Self of man. Where is it to go? Where is it not to go? It is everywhere. So all this childish dream and puerile illusion of birth and death, of heavens and higher heavens and lower worlds, all vanish immediately for the perfect. For the nearly perfect it vanishes after showing them the several scenes up to Brahmaloka. It continues for the ignorant.”

“Science and religion will meet and shake hands…When the scientific teacher asserts that all things are the manifestation of one force, does it not remind you of the God of whom you hear in the Upanishads? Do you not see whither science is tending?”

Einstein’s non-mechanistic science was very difficult for Western materialist minds to comprehend because his mystical view questioned the substantiality of matter and the ultimate reality of space, time and causality. Like Vivekananda, he said:

Thus, Einstein’s rejection of prevalent religious ideas about God and individual survival of physical death and afterlife was consistent with his revolutionary science as well as with Eastern non-dualistic teachings explained by Vivekenanda that apparent separation between subject and object is an unreal “optical illusion of consciousness.”

Did Einstein’s psyche survive his death?
Was he surprised on his demise?

Though Einstein didn’t believe in individual survival of physical death, he may have been surprised on his demise. Conservation of energy is basic to physics. So Einstein must have realized that his subtle energetic essence was indestructible and could only be transformed from one state to another. But we don’t know how that knowledge may have influenced his opinion about what happens on individual death, or his experience thereafter.

Except for very rare Buddha-like people who transcend all desires, it is probable that all humans survive physical death as psyches or mental bodies, irrespective of their beliefs. So the Dalai Lama has said:

“[Physical qualities] cannot be carried over into the next life.
The continuum of the mind, however, does carry on.
Therefore, a quality based on the mind is more enduring. …
So, through training the mind, qualities such as compassion, love, and the wisdom realizing emptiness can be developed.”
~ H.H. Dalai Lama, from Practicing wisdom: the perfection of Shantideva’s Bodhisattva way

Thus, Buddhists say that Gautama Buddha experienced countless incarnations over eons of time before ultimately transcending the cycle of birth and death. And the Dalai Lama has said:

“We are born and reborn countless number of times, and it is possible that each being has been our parent at one time or another.  Therefore, it is likely that all beings in this universe have familial connections.”
~ H. H. Dalai Lama, from ‘The Path to Tranquility: Daily Wisdom”.

But, rather than wondering if on demise of Einstein’s physical body and extraordinary brain, his subtle mental body survived – with its unfulfilled desire to find a single simple “unified field” formula explaining phenomenal reality from perspective of ‘the mind of God’ – let us honor his immense evolutionary accomplishments and take inspiration from his compassionate social activism, and pragmatic wisdom.

And thereby let us learn to live ever more peacefully, harmoniously and skillfully, in this ever changing phenomenal world of space, time and causation, as together we evolve out of the darkness of ignorance and into the light of Eternal Awareness.