“No problem can be solved from the same level of consciousness
that created it. ”
~ Albert Einstein

“The release of atom power ..changed everything
except our way of thinking..the solution to this problem
lies in the heart of mankind.”
~ Albert Einstein

“I think with intuition. The basis of true thinking is intuition.
Indeed, it is not intellect, but intuition which advances humanity.
Intuition tells a man his purpose in life.
One never goes wrong following his feelings – for feelings and intuition are one.”
~ Albert Einstein

“A person starts to live when he can live outside himself.”
~ Albert Einstein

“Humanity is evolving out of the box and into the light of creation.”
~ Ellie Crystal 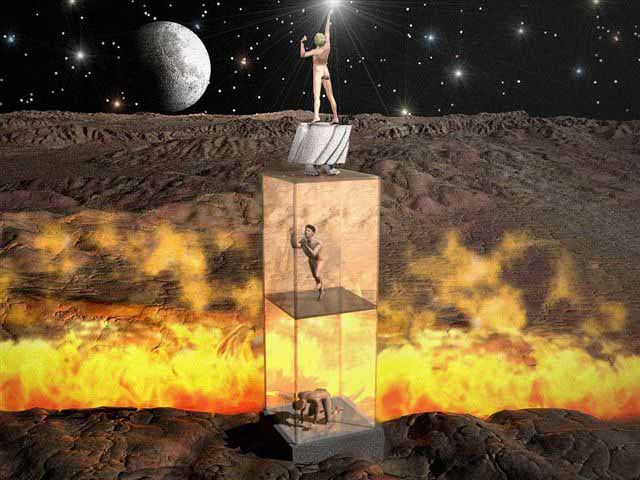 Evolving ‘Out Of The Box’ Into The Light Of Creation

Individually and societally, humankind have been caught in a psychological box, self-created by mistaken perceptions and ego-mind ideas of separation from Nature and each other.

We’ve mistakenly regarded ourselves and others as mere limited entities,  rather than as limitless souls – spirit drops in an infinite ocean of Eternal Light.  And, our worldviews have been mostly based on such unrealistically reductionist ideas of who and what we are.

Thereby, individually we’ve been caught in a mistaken self-identity box;
and societally we’ve been “boxed in” by an outmoded Newtonian pre-quantum worldview. Though quantum science now knows that “reality” can’t be reduced  to objects or entities in space, we’ve kept acting as if this is so.

We’ve thus been self-limited by our mistaken ideas of “reality” and of our true identities, powers and potentialities –  which are infinite, though yet largely unknown and unrealized.

But, spurred by extraordinarily critical inter-personal and planetary crises,  and innately blessed with an intuitive evolutionary impetus in each us,  more and more people are realizing their true spiritual nature  and awakening with compassion from their egoically imagined limitations.

From seeing everyone and everything as discrete and separated by apparently immutable boundaries, we are gradually realizing that everyone/everything is connected by our common essence:
ever-changing energy in a matrix of immutable eternal Awareness.

We are evolving from a Newtonian “reality” of polarized duality
to a quantum “Reality” of holistic connectedness; from either this or that, to this and that are ONE. And so we are beginning to envision, intuit and implement  ‘Out Of The Box’ solutions to current crises.

And as we evolve ‘Out Of The Box’ and into the Light of creation,
we shall soon reach a critical-mass tipping point which uplifts human consciousness to transcend and resolve crises arising from outmoded and illusionary egoic beliefs.

Ron’s commentary on evolving out of the box into the light of creation.

While long aware that “no problem can be solved from the same level of consciousness that created it”, I’ve often wondered how individually and societally we can most effectively elevate human consciousness to resolve critical interpersonal and international planetary problems. And I’ve concluded that we need to be ever more loving and compassionate; that our love is ‘contagious’ and will inevitably bless and change the world as it gradually spreads to others, until ultimately we will reach a ‘critical mass’ tipping point triggering new societal worldview solutions to old problems.

“we shall soon reach a critical mass tipping point which uplifts human consciousness to transcend and resolve crises created by outmoded and illusionary beliefs.”


Yet paradoxically – and especially since election of Donald J. Trump as US President – it appears we are now nearer than ever before to ecological or nuclear disaster, potentially portending destruction of Earth life as we have known it. So, more than ever before, we urgently need elevated human worldviews to avert such disaster.

A century has passed since quantum science revealed to us that “reality” can’t be reduced to objects or entities in space/time. Yet we’ve kept acting as if this is so – clinging to a false Newtonian materialistic worldview that sees everyone and everything as discrete and separated by apparently immutable boundaries.

Three generations have passed since immensely destructive nuclear weapons were first developed, atmospherically tested, and savagely used by the American Empire against innocent civilians at Hiroshima and Nagasaki. Yet these dreadful weapons have proliferated worldwide and now threaten our precious planet more than ever before. In a May 1946 letter to prominent Americans, Albert Einstein wrote:

“The unleashed power of the atom has changed everything save our modes of thinking, and we thus drift toward unparalleled catastrophe.”


Einstein foresaw that such “unparalleled catastrophe” could be averted only from levels of consciousness beyond those which created it; thus he observed that “the solution to this problem lies in the heart of mankind.”

After much deep reflection, and with unspeakable faith in the Sacred Heart of all Humans – which is LOVE – I have today optimistically reposted the foregoing essay with my intuitive ‘utopian’ prophesy of Humankind’s transcendence of current cataclysmic threats to life on Earth.

Maybe I’m a crazy “cockeyed optimist”, but I still foresee the imminent onset of a new age of nonviolent democratic societies which will advance the highest good for all life on our precious planet; I’m still “stuck like a dope with a thing called hope, and I can’t get it out of my heart!”

Perhaps, we’ve been karmically destined to suffer extraordinary and unprecedented 2020 coronavirus “new reality” ‘hard times’. But our suffering can prove to be an ultimate evolutionary impetus triggering our ‘breakdown breakthrough’ to a new worldview transcending the outmoded and illusionary beliefs which created current crises.

So I optimistically pray that we shall join together – each from our unique intuitive perspective – to fearlessly follow our hearts and ‘contagiously’ bless all Life as LOVE.

With quiet minds and open hearts
may we thereby honor
the ultimate spiritual essence
of everyone/everything/everywhere
thereby uplifting human consciousness
to transcend and resolve crises created by
outmoded and illusionary worldview beliefs.