“In a single atom, buddhas as many as atoms
Sit in the midst of enlightening beings;
So it is of all things in the cosmos —
I realize all are filled with buddhas.”
~ Avatamsaka Flower Ornament Sutra

“Every particle of the world is a mirror.
In each atom lies the blazing light of a thousand suns.”
~ Mahmud Shabestari, Sufi Mystic, 15th century.

Who are YOU? said the Caterpillar.
Alice replied, rather shyly, I–I hardly know, sir, just at present– at least I know who I WAS when I got up this morning, but I think I must have been changed several times since then. —-
The Caterpillar was the first to speak.
What size do you want to be? it asked. —–
Well, I should like to be a LITTLE larger, sir, if you wouldn’t mind, said Alice: three inches is such a wretched height to be. ———
One side will make you grow taller, and the other side will make you grow shorter.
One side of WHAT? The other side of WHAT? thought Alice to herself.
Of the mushroom, said the Caterpillar
~ Lewis Carroll, Alice in Wonderland, Chapter 5 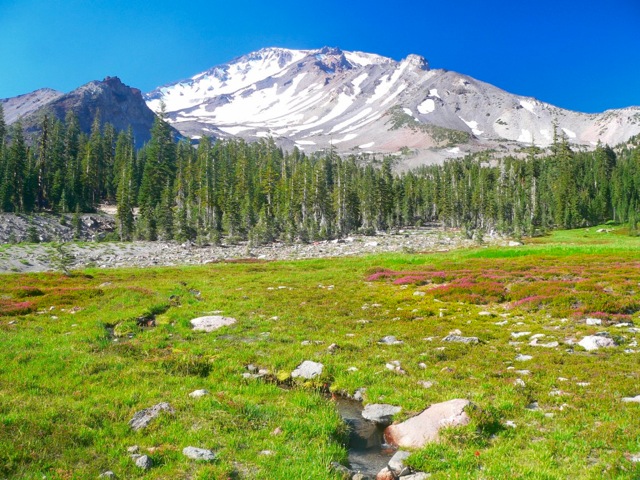 A Magic Mushroom in a Magic Meadow on a Magic Mountain

After my mid-life awakening my life’s focus gradually evolved from litigation to meditation and I became less and less ‘up-tight’ about some of my prior worldly ways. But I remained reluctant to use psychedelic substances, even though my pivotal OOB experience had been triggered by inadvertent ingestion of marijuana.

As a lawyer, I didn’t want to do anything illegal that might prejudice my professional reputation or law license. Also, as CIIS Board Chairman in the early 1980’s I didn’t want to participate in any activity that could adversely reflect on our institution’s obtaining crucial accreditation from the Western Association of Schools and Colleges.

As a spiritual practitioner, I had learned that many prominent Eastern teachers and paths strongly discouraged the use of any psychoactive drugs. Nonetheless many spiritual people I greatly appreciated – like Ram Dass – had been awakened, but not “enlightened”, by LSD and other psychoactive substances. In all events, because of many experiences without psychedelics, I became convinced that for me they were not necessary and might be detrimental to my spiritual evolution.

Once, soon after my divorce, I was with a date who sociably offered me a marijuana “joint” to share with her. Curiously and so as not to offend her, I took a few puffs on the marijuana cigarette. But, just as with nicotine cigarettes, it seemed insane for me to intentionally pollute my body’s precious lungs with smoke instead of breathing fresh air. And I never did that again.

Nor did I ever again intentionally ingest any other psychoactive substance, until an unplanned incident in a beautiful nature place on a legendary mountain sparked an unforgettable “peek experience”, forever raising my spiritual awareness.

After my spiritual opening, I began having extraordinary energy experiences involving other people, creatures and places. One of the places where I experienced extraordinary spiritual energy was Mt. Shasta, a spiritually legendary majestic volcanic mountain in Northern California near the Oregon border.

I ‘discovered’ Mt. Shasta in the early 1980’s while occasionally visiting a nearby ashram established for Guruji by his disciples in Yreka. There I was told that Guruji regarded Mt. Shasta as one of the world’s holy mountains, like those in the Himalayas. And I learned that Mt. Shasta is considered worldwide as one the most sacred and mystically powerful places on our precious planet; that there are legends about it as a focus for angels, spirit-guides, spaceships, and ascended masters, and as home of Lemurians, subterranean survivors of an ancient lost continent which sank into the sea.

Apart from these legends, Mt. Shasta’s extraordinary beauty and almost palpable spiritual energy attracted and fascinated me and I wished to spend time there rather than just passing by on trips to the ashram. So, I arranged to visit Shasta with two spiritual friends who had been initiated by Guruji – Tara and Ramdassi – both of whom were later amongst those on the 1982 pilgrimage to India, my ‘trip of a lifetime’.

On a lovely sunny Saturday morning in late summer 1981, we three began a day hike on the mountain, carrying our lunches and extra clothes in light backpacks. At mid-day we arrived at Panther Meadow, the most beautiful alpine meadow I have ever seen. I beheld it then as lushly verdant with abundant delicate plant-life, bifurcated by a tiny creek meandering into a pristine pond at the bottom of the meadow. Above the lush green meadow appeared a stand of beautiful evergreen trees, and above the tree line the snow-capped mountain peak framed by an azure blue sky glistened in the sun. Later, I learned that this extraordinarily beautiful nature place was ceremonially revered as a sacred site by indigenous peoples and spiritual pilgrims.

This breathlessly beautiful meadow appeared a perfect place for our picnic lunch. So, we found a place near the creek to quietly eat while reverently enjoying the immense beauty surrounding us. Before we sat down, I walked to the pristine pond into which the creek was flowing and tested the water temperature with my left hand. It was ice cold, from the melting mountain ice and snow – and I immediately withdrew my immersed hand.

Sitting near the creek, we silently and contemplatively ate our lunches. After perhaps an hour, when we had finished eating, Ramdassi withdrew from her backpack a small packet of tiny dried mushrooms, which she silently offered to Tara and me.

Although I had never before seen or eaten psilocybin mushrooms, I intuitively realized that these were such mushrooms and politely declined Ramdassi’s offer. Then Tara, who was a registered nurse at a large hospital, also declined the mushrooms. Whereupon, Ramdassi, who was a talented artist and shaman, importuned each of us to reconsider and to join her in ritually partaking of the mushrooms. She explained that she could not eat the mushrooms alone, but only with others, as part of a sacred ritual.

But Tara still refused them. Though I felt no desire to use the mushrooms, and was somewhat inhibited, I empathized with Ramdassi, sensed her frustration and was motivated to help if possible. So I asked her how many of the tiny mushrooms were needed for a psychoactive experience. She replied, “at least three or four”. Whereupon, I said: “OK, I’ll take only one, if that will permit you to proceed.” So she handed me one tiny mushroom which I ate as she proceeded with her mushroom ceremony.

Soon thereafter I fell into an exceptionally deep meditative state, which I later realized was a ‘psychoactive samadhi’. I was immersed in timeless state with my body sprawled prone, eyes closed and head facing downward and resting on the verdant meadow carpet. After Tara and Ramdassi had waited for at least an hour for my return to waking consciousness, the mushroom’s effects finally began to wane, my body stirred and eyes blinked open onto the green plant cushion.

Whereupon, I beheld an extraordinary and unforgettable sight. With “X-ray and microscopic vision” I saw beyond the green surfaces of the meadow grass, plants and leaves into each and every cell and atom thereof. And in each plant atom I wondrously beheld an image of a Divine being, angel or saint. These images were similar to those I had infrequently and fleetingly seen during deep meditations at home. They seemed to appear holographically and fractally in some regular repetitive fashion.

After gazing at this wondrous sight, my body finally stirred as I awakened from the samadhi state. Then, though as an ‘uptight’ city dweller I had never before gone skinny dipping alone or in the presence of others, I spontaneously threw off my clothes and jumped naked into the waste-high ice cold pond waters. And for the first time in this life my body spontaneously went into a crucifixion posture with arms extended parallel to the pristine pond’s surface. There, half baptized in the sacred water, my body so remained motionless for some timeless/thoughtless moments, without any awareness of bodily chill.

Ultimately, I came out of the pond, dressed, and continued silently hiking with Tara and Ramdassi. But in some ineffable and awesome way I felt transformed – as if I had just experienced a deep secret of Mother Nature.

Prior to this amazing experience, I’d already (intuitively but not experientially) realized that manifest “reality” is a holographic mental projection of consciousness. But this synchronistic experience seemed to confirm the accuracy of that insight about the holographic nature of our perceived reality.

Also, after initiation by Guruji I had learned that Hinduism, Buddhism and other spiritual traditions refer to an esoteric ‘third eye’ supposedly located around the middle of the forehead slightly above the eyebrows, and anatomically connected with the pineal gland; that in the Kundalini yoga tradition this ‘third eye’ is associated with the sixth or ajna chakra, which when fully opened supposedly permits universal vision into every place and time without limitation. This experience of x-ray/microscopic vision helped confirm what I had heard and read about the existence of such a ‘third eye’ with potential universal vision.

As to the significance of my unprecedented and spontaneous assumption of a crucifixion posture in the pristine pond, I can only speculate. Perhaps this act symbolized soul recognition of incremental rebirth and resurrection from a lower to higher state of spiritual awareness. Or perhaps it was the manifestation of a deep devotional tendency from another lifetime.

May we remain ever aware and grateful for our divinely blessed lives on this beautiful blue planet Earth, always open to infinitely possible magical blessings beyond our present imagination or conception.