“Every feature of the Porziuncola lifts the heart and mind to God”
~ St. Padre Pio

“The winds of grace are always blowing, but you have to raise the sail.”
~ Sri Ramakrishna

Above all the grace and the gifts that Christ gives to his beloved is that of overcoming self.
~ Francis of Assisi

Remember with gratitude,
Life is beatitude –
Even its sorrows and pain;
For we’re all in God’s Grace,
Every time, every place, and
Forever (S)HE will reign!
~ Ron Rattner, Sutra Sayings 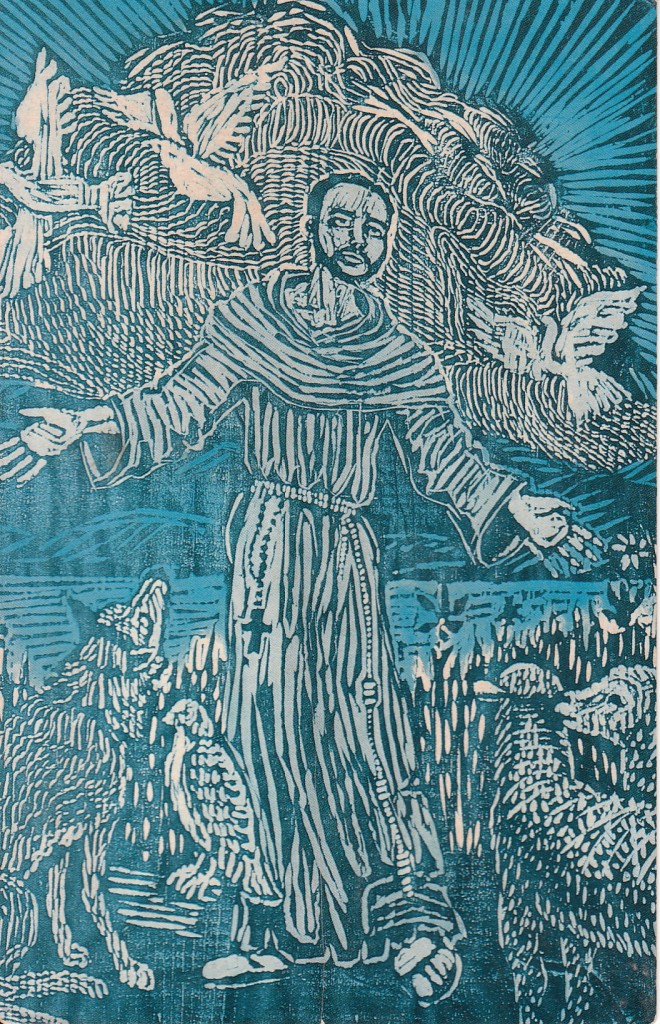 A Day of Grace: Rediscovering the Porziuncola

When I moved from Chicago to San Francisco in 1960, I was largely uninformed about religions other than Judaism, and knew virtually nothing about saints. Even though Saint Francis of Assisi was patron saint of my new home, I remained ignorant of his life story until after my profound spiritual opening in 1976.

Then, through a series of synchronistic inner visions and outer events I developed a deep inner rapport with Saint Francis. And his prayer became – and remained – an important part of my daily spiritual practice.

On retirement from law practice in 1992, I made pilgrimages to India and Italy to pay my respects both to my spiritual master Dhyanyogi Madhusudandas and to Saint Francis.

On arriving in Italy in Springtime 1992, I rented a car at the Rome airport and drove northward to the Umbrian town of Assisi, where Francis was born and resided for most of his extraordinary life. As I arrived at the outskirts of Assisi, I immediately experienced a remarkable feeling of déjà vu, and was so overcome with emotion that I had to pull over to the side of the road as I began crying deeply and intensely for a long time.

My subsequent stay in Assisi and excursion to Mount La Verna in Tuscany – where Francis became the first saint to receive the crucifixion stigmata of Christ – proved magical, with unforgettable spiritual experiences.

One of the most profound of those experiences happened as I visited a tiny frescoed chapel called Porziuncola [“the little portion”]. It had been restored from a ruined condition by Francis and his early followers to become first home of the Franciscan order. Here, Francesco lived, wrote his rule, created his order of friars minor and consecrated his friend Clara (Chiara), who became Santa Clara, founder of a female order dedicated to Franciscan ideals of holiness and poverty. Francis so loved this little place that he chose to die there.

As I entered the Porziuncola at Assisi, I experienced a palpable aura of love and was overcome with emotion, cried deeply and intensely and lost track of time. Ever since then, a memory of that exquisitely simple little chapel and its aura of supernal Love has remained enshrined in my heart. Although I have never since returned that holy Assisi place, which Saint Francis named and loved, my cherished memory of the Porziuncola was revived following a surprising and synchronistic ‘holy encounter’ in San Francisco, almost twenty years later. Here’s what happened.

After retirement many years ago, it became my practice to walk almost daily along San Francisco Bay. Most often I walked to the Bay following pedestrian paths beside the Fort Mason Great Meadow, which is part of the Golden Gate National Recreation Area (GGNRA), our nation’s newest National Park.

As I arrived at Fort Mason on a beautiful and sunny June morning, I was obliged to detour from my usual path to the Bay. The National Park Service had closed the pedestrian paths around the Great Meadow for repaving. So to reach the Bay I had to walk across the grassy meadow. There I saw a very unusual sight. Perhaps hundreds of children, attended by mostly senior adults, many dressed in white, were gathered in the meadow. Many tents were set up for children’s activities, such as face painting and fortune telling. Sweet music was playing on loud speakers.

I was quite impressed by this charming scene, of sweet children and caring adults, and I sensed an especially loving atmosphere pervading the meadow. Curious, I asked the first chaperone I encountered, “what’s happening?”. A lovely senior lady told me that this was a children’s fair sponsored by the Meher School of Lafayette (a San Francisco suburb) for its students and for children from less affluent San Francisco neighborhoods, who had also been invited. [*see footnote] 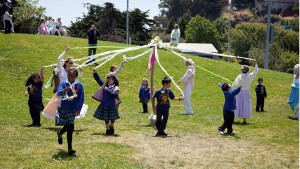 Inspired by the love I perceived and felt there, I continued walking through the meadow and toward the Bay. After hiking out to the end of San Francisco Municipal Pier, I began returning home. Soon, I noticed an unopened bottle of spring water apparently dropped by a cyclist. I picked up the water bottle, determined to give it to someone at the children’s festival in the Great Meadow.

As I arrived again at the meadow, I was met by a tall friendly (and thirsty) man named Peter, who seemed to be watching out at the perimeter of the children’s gathering. Though we’d never met, he somehow seemed familiar. In greeting me Peter asked, “would you like to know what’s happening?” After I recounted what I already knew about the festival and gladly gave Peter the bottle of spring water, he told me more details of this event.

Peter explained that this gathering was like a mini-Umbrian children’s festival inspired by universal values of Saint Francis of Assisi which are similar to those of the Meher School; and, that periodically the school sponsors a play about the life of Francis performed at various venues, including at The National Shrine of Saint Francis of Assisi, located in San Francisco’s oldest church in the North Beach district.

I was very surprised when Peter mentioned a national shrine of Saint Francis of Assisi located in San Francisco. Though I’d then lived in San Francisco more than fifty years, I don’t remember ever before hearing about such a national shrine. Moreover as Peter described the shrine, I was amazed to learn that it included an almost exact replica of the Porziuncola at Assisi, recently constructed at the instance of former San Francisco supervisor Angela Alioto.

Peter and I then exchanged stories about our respective springtime visits to Assisi and our heartfelt affinity with Saint Francis. On parting we shared contact information.

A few days later, I received an email invitation from Peter’s friend and colleague, Terry, to tour the San Francisco Porziuncola shrine, which I quickly accepted. Terry, was both music director of the Meher School’s sponsoring non-profit organization, Sufism Reoriented, and a member of the Knights of St. Francis, a volunteer organization which helps safeguard the national shrine.

The tour proved magical for me. With Terry and Peter as guides, I beheld for the first time the San Francisco “Porziuncola Nuova”. Before entering, I noticed carved in Italian on the second marble step a quote from Francesco: “Vi voglio tutti in Paradiso” [“I want you ALL in Paradise”]. On learning what those words meant, I experienced instant heart-felt emotion and tears.

As I entered the sanctuary that emotion deepened, and soon overcome by it I was obliged to sit silently in a pew, just as I did in Assisi. And, as in Assisi, profuse tears flowed. Unable to talk, I sat and cried for a while as Peter compassionately attempted to comfort me. In the San Francisco Porziuncola I didn’t lose track of time as I did in Assisi, and after crying for a while resumed conversation with Terry and Peter.

But I continued feeling so emotional in that sacred space that I was unable to focus on details of the beautiful pictorial art and artifacts around me, which I later observed on other visits.

I did however notice a prominently displayed letter Tau, the last letter of the Hebrew Alphabet which in biblical times closely resembled the letter T. [See below.] The Tau was adopted by Francesco as his own symbol or logo which he painted on the walls and doors of places where he stayed, and used in his writings as his only signature. (Synchronistically, I had a few days earlier been discussing with a friend possible use of a Tau as a logo for The Perennial Wisdom Foundation, the new non-profit corporation which I was then forming.)

Before exiting the “Porziuncola Nuova” I gazed upon and gently touched one of the holiest Franciscan relics in the world, a beautifully displayed rock believed to have been used by Francis as a crude tool in his reconstruction of the Porziuncola.

After departing the shrine, Terry and Peter and I adjourned for lunch in a nearby restaurant, where we shared stories of how Divine Grace has continuously blessed our lives, as it did on that magical day.

And in now reflecting on that wonderful day of rediscovery, I realize that it couldn’t have happened but for my synchronistic detours through the grassy Great Meadow and desire to share a bottle of spring water which I happened to find while walking by the Bay. 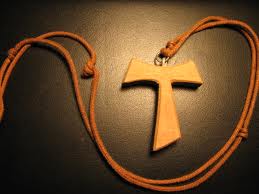 * I later learned that this children’s fair was part of an ongoing national program called Francis in the Schools founded in 2010 by Dr. Carol Weyland Conner, spiritual director of Sufism Reoriented.