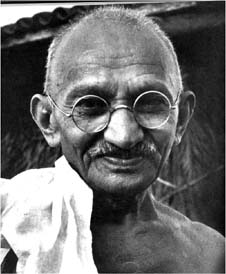 What does Mahatma Gandi’s oft-quoted advice to “be the change” really mean?

According to his grandson, Arun Gandhi, he was speaking after a prayer service where people said to him that the world has to change for us to change.

He responded, “No, the world will not change if we don’t change.”

So we must each be the change we want to see.

Because Gandhi walked his talk authentically, peacefully, and universally, his words and life were very inspiring and powerful. He changed the world by being the change he wanted see, particularly the non-violent end of the British Raj in India, followed by Indian independence and democracy.

So Gandhi’s life and words have inspired and actuated countless millions of people worldwide.

One of the those people is a talented American rapper named MC Yogi who has creatively conveyed the Mahatma’s life story in rap with rhymed words and powerful pictures.

You can listen, watch and enjoy his unique Gandhi Rap here:

Inspired by Gandhi’s example, let each of us consciously live our lives as our message. And together let us be the change we want see.