“No problem can be solved from the same level of consciousness
that created it. ”
~ Albert Einstein 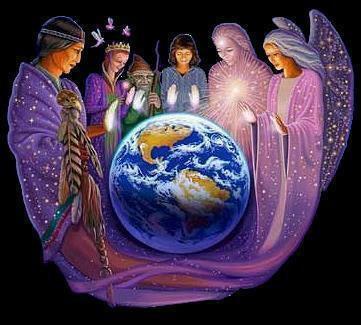 Except for timeless awareness, nothing is permanent ‘neath Heaven’s vast firmament’. Science shows us that our world and everything in it is ever changing energy. Yet we have been spell-bound by cultural conditioning, language and perception to believe ourselves separate subjects in a solid “objective” world.

Until now, acting on the illusionary belief that we are separate from Nature, we have ignorantly, fearfully and greedily been despoiling and exploiting our precious planet and its lifeforms, thereby creating immense ecologic, economic, humanitarian and interpersonal crises.

Yet, paradoxically, though confronted with extraordinary peril, we now have unprecedented potential for solving and transcending our planetary problems, intuitively, scientifically, and technologically.

This is the dawning of the Age of Aquarius, and Humanity is achieving a critical mass of higher consciousness which will resolve our critical mess as we transcend the separate subject-object illusion, realizing that Nature is our nature; that what we do to Nature and others we do to ourselves.

Here is an excellent essay by spiritual author and teacher Owen Waters, explaining how ultimate power to transcend human problems is within each of us; and how we are now experiencing a subtle shift in human consciousness which is being led by a critical mass of spiritual seekers – sometimes called “lightworkers”.


The Lightworker Objective ~ by Owen Waters*

We are in the midst of a revolution in consciousness which is affecting everyone. Even the most staunch traditionalists in society are being dragged into a vortex of ever-increasing change.

The 80-20 rule states that 80% of any change is typically caused by 20% of the people. The 20% consists of the leading thinkers of the day. In spiritual matters, these leading edge people are sometimes called lightworkers or old souls, indicating that they have learned more from their experiences through many incarnations. This advanced learning is stored as wisdom in their souls and they benefit from it consciously through intuitive inner guidance.

Today’s leading edge thinkers planned ahead to be incarnate at this time in history to help make the essential positive changes in society possible. Social science has begun to recognize them as a major group in today’s society.

A survey in the 1990’s by researchers Paul Ray and Sherry Anderson found that 26 percent of American adults had become what they termed Cultural Creatives. Over fifty million Americans now fit the definition of a newly emerging type of humanity that has made a comprehensive upward shift in worldview, values and way of life. In Europe, a 1997 survey conducted in fifteen European countries showed figures that are very similar to the United States.

So, in a social setting the term ‘leading edge thinker’ actually applies to more than 20% of the people today. Most of them don’t think of themselves as leading edge, nor do they typically realize how many other people are just like them.

The term ‘lightworker’ is synonymous with ‘spiritual seeker.’ You may or may not think of yourself a lightworker but, if you’re reading this, then you fit the definition perfectly.

The two categories of Cultural Creatives identified by Ray and Anderson fit exactly into the consciousness patterns of lower and upper fourth density. While our physical bodies are currently located in upper third density, our minds are free to soar through heart-centered fourth density and into fifth-density soul consciousness.

When a person moves from the third-density challenge of developing basic intellect into lower fourth density, their worldview expands and they become more aware of the needs of society. They take into account the local and global effects of their own actions and the actions of others that they support. Environmental, organic and peace-making concerns all come under this frequency band of consciousness.

Then, as outlined in my book, The Shift: The Revolution in Human Consciousness, when people move from lower to upper fourth-density consciousness they pass through the gateway of the heart. This brings them into the first level of spiritual awareness and they become more concerned with inner development and enlightenment.

Leading thinkers are simply people whose normal frequency of consciousness is higher than average. The higher your frequency, the greater your awareness and the greater your ability to lead change by showing others how to resolve the challenges in life.    Two very popular issues today are control issues and self-empowerment. People who were raised to feel the need to be in control are now recognizing that this was just another form of fear which has no substance in reality. Reality comes from your soul’s intuitive guidance because, at a soul level, your consciousness sees everything that you need to succeed and achieve your purpose in life.

The opposite side of the same coin is the issue of self-empowerment, which is learned by people who break free of control by others and establish their own sense of inner strength and self-dependence.

The issue of self-empowerment is being explored at a societal level as well as an individual level. Every person who begins to realize that they are being deliberately disempowered and turns off the fear-inducing news broadcasts leads the world another step towards liberty from the chains that are designed to bind people to a life of servitude. Thanks to the awakening of lightworkers and leading thinkers, the world is waking up to a whole new standard of personal power and dignity.    Here is the point that I am being told to make by The Lord Protector of The Shift: Lightworkers often choose to experience major challenges in their lives, not because they need the experience, because they have mastered those challenges in previous incarnations. Instead, lightworkers choose to experience challenges because other people need leading thinkers to show them how to resolve these issues. The more the leading-edge people succeed in resolving these issues, the easier it becomes for the rest to follow.

There is a global mind atmosphere or ‘mind belt’ of human consciousness around the planet. You are subconsciously linked with the mind belt 24 hours a day. It affects you and you affect it. Your contribution to the mental and spiritual health of the world is made every second of every day.

The Lightworker Objective is to be a pioneer in the advancement of consciousness, often adopting certain challenges in order to work through them and, by doing so, creating a pattern in the mind belt to make it easier for others to follow.

If you are currently working through a major life challenge and feel as though you’re going round in circles and getting nowhere, STOP and look for the gift in that challenge.

The gift is that, by loving yourself and others more, you can rise above the challenge and become more of who you really are. Then, the experience changes from one of challenge to one of self-empowerment.

Real strength does not lie anywhere in the outside world. It lies within you. Once you find that inner power, you rise above any limitation and stand as a self-realized leading thinker in a world desperate for spiritual freedom.

*Owen Waters is the author of The Shift: The Revolution in Human Consciousness, and other spiritual books and articles described at: http://www.infinitebeing.com/index.html