“Those who say religion has nothing to do with politics
do not know what religion is.”

“I claim that human mind or human society is not divided into watertight compartments called social, political and religious.
All act and react upon one another.”
~ Mahatma Gandhi

“In our age there is no such thing as “keeping out of politics.”
All issues are political issues, and politics itself is a mass of lies, evasions, folly, hatred and schizophrenia.”
~ George Orwell – “Politics and the English Language,” 1946 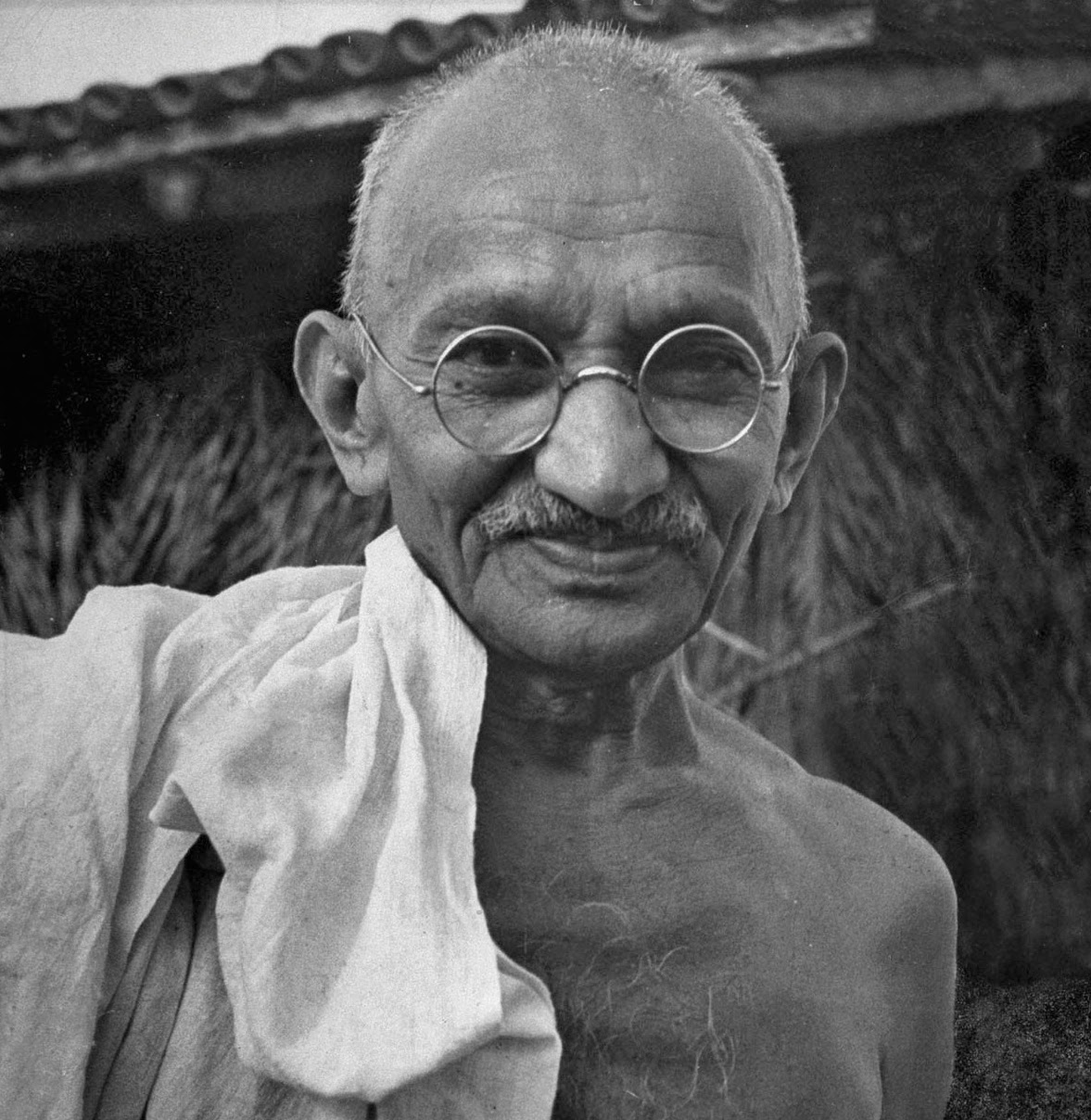 After my mid-life spiritual awakening, my lifestyle changed radically. While publicly maintaining my professional life as a lawyer, privately I soon began living a simple monk-like existence, withdrawing from prior involvement in worldly entertainments and pastimes. For the first time in many years, I was living alone without a partner to influence my way of life. So, following inner inclinations, I stopped watching TV and rarely went to movies or concerts. I became a largely raw-food vegetarian and ate mostly at home rather than in restaurants. Retaining very few pre-divorce friends, I spent more time alone and began associating mainly with people interested in spirituality.

And especially after meeting Guruji in 1978, I felt for the first time an intense longing to return to Divinity. So I began praying fervently for a way to exchange my life of litigation for a life of meditation. But I felt confused and conflicted because I needed income from lawyering to help support my young children.

Whereupon, synchronistically I was given an unforgettable mystical experience which helped resolve that confusion. In a crowded courtroom, I was shown that the Divine is immanent in everyone everywhere – even in crafty lawyers; that experiencing nearness to God is mostly dependent on our state of mind rather than our physical environment. (See https://sillysutras.com/beholding-divine-light-in-a-worldly-courtroom-rons-memoirs/ )

So I became resigned to carrying on my life as a lawyer. However, I remained uncertain about continuing my life-long social justice activities when I yearned to devote more quiet time for meditation, prayer and spiritual practices.

Ultimately, after much soul searching, I honored inner impulses and persisted in pursuing an egalitarian path of politically engaged spirituality, rather than a path of monk-like withdrawal from worldly concerns. Though I respected the reclusive spiritual masters, monks and nuns who elevate human consciousness through their spiritual light and devotional practices, I felt greatest affinity with Mahatma Gandhi, Martin Luther King, Jr., Jesus, and the Dalai Lama, whose non-violent pursuit of social justice greatly inspired me.

Though neither of my parents was politically engaged, growing up I felt early affinity with traditional Jewish social justice values. The Torah (old Testament) admonishes Jews not just to give to the poor but to advocate on their behalf. For example, Proverbs 31:9 tells Jews to “speak up, judge righteously, champion the poor and the needy.”

So, in becoming a lawyer and throughout my professional career, my main motivation was to help others; it was not to become rich or famous. Long before my spiritual awakening, I had a deep inner instinct to pursue social justice causes, with considerable egalitarian sensitivity to the “insanity and iniquity of inequity in our society”. For many years I symbolically kept on my desk a placard with this inspiring biblical language:

“He shall rescue the needy from rich oppressors,
The distressed who have no protector.
He will have pity on the needy and poor,
And redeem them from oppression and violence.”
~ Psalm 72:12-14

In the late 1950’s I was deeply influenced and persuaded by then prominent author-psychotherapist Erich Fromm, about the pathology of ‘normalcy’ in our materialistic society. In “The Sane Society” Fromm suggested that materialistic Western society was lacking in sanity; that the inequities and disharmonies of the entire society were pathological, not just the mental illnesses of people therein. Like Karl Marx, Fromm saw capitalistic greed and exploitation of workers at the root of societal pathology, and persuasively he advocated for democratic socialism. (Much later I learned that my heroes Dr. King, Albert Einstein and the Dalai Lame held similar views.)

Fromm’s essay confirmed and enhanced my instinctive reluctance to selfishly follow materialistic societal goals. And it encouraged me to endorse egalitarian political and economic solutions for redressing indiscriminate imposition of inequality in our capitalistic society. Often I became quite passionate and outspoken about my political views that “the more that money rules the world, the more that money ruins the world”.

Especially after the traumatically shocking 1963 “deep state” assassination of President John F. Kennedy and the soon ensuing ‘false flag’ alleged Gulf of Tonkin attack as pretense for escalated and patently insane Viet Nam war devastation, I became aware of the prescience of President Dwight Eisenhower’s 1961 valedictory caution against dominance of the “military-industrial complex” with “potential for the disastrous rise of misplaced power”. And ultimately I perceived that, despite Eisenhower’s warning, ruling power had indeed been misappropriated by people who are ruling and ruining the world, in concert with the military-industrial complex or “deep state”, while presiding over serious curtailments of US constitutional protections and civil liberties.

I saw that just as Hitler in Nazi Germany had molded an insane society to support his pathological pretensions and plans, sociopathic Western leaders of all political parties have used insidious propaganda about contrived enemies and fomented “terrorists” as a pretense to create insane societies which have fearfully condoned or acquiesced in outrageously immoral wars in Afghanistan and Iraq, drone killings of innocent civilians, and plans for attacking Iran, Libya, Syria and other Moslem countries, with radically expanded US military budgets and executive powers, while obscenely enriching entrenched vested interests.

After my mid-life spiritual awakening, my radical political views persisted. But, inspired by Mahatma Gandhi and others, I sought to ‘spiritualize’ my legal advocacy and social justice pursuits, so as to foster rather than impede optimal evolutionary advancement. Though outwardly little changed, inwardly I more and more accepted challenges of my lawyer’s life as opportunities to fulfill moral responsibilities to society, my clients, my family and others, while elevating my spiritual awareness.

But, especially after inauguration of the Bush/Cheney administration and the terrorist attacks of 9/11/2001 – which (based upon indisputable evidence) I deemed ‘false-flag’ operations perpetrated to foment hatred against intended Moslem targets of the military industrial complex – I became so caught up in polarized political issues that I clearly was experiencing more combative (rajasic) and less elevated (sattvic) energy than before meeting Guruji. However, instead of taking responsibility for my own agitated and combative state of mind, I often complained that Bush and Cheney and deep state ‘neocons’ had ‘brought me down’ from higher states of consciousness.

Gradually, I came to see that it was my own disturbed, judgmental and reactive ego/mind – not Bush and Cheney et al – that was psychologically bringing me down. Thus, I also could see (as Mahatma Gandhi observed) that the human mind and human society are “not divided into watertight compartments called social, political and religious. All act and react upon one another.” And I began viewing apparent injustices with more and more detached compassion for the wrongdoers’ egotistic ignorance – yet never abandoning nonviolent Gandhian pursuit of social justice.

Because our hallowed Mother Earth is now experiencing an Aquarian age of “once-in-a-lifetime” favorable cosmic energies and auspicious cyclical and astrological planetary alignments, and because the Eternal Light of Divine Truth always prevails over malignant darkness, I now optimistically foresee humankind’s imminent “critical mass” empathetic awakening to our instinctive caring for one-another, and ascension to elevated new dimensions beyond current space/time sufferings – wherein we will follow our hearts to co-create a prophesied New Earth era of long-lasting happiness beyond space/time sufferings.

Thus I believe that this is an historically unprecedented pivotal time, when much of humankind will ‘quantum leap’ to lovingly higher states of consciousness and spiritual freedom. And that we are immensely fortunate to witness and cooperatively participate in so raising humanity’s collective consciousness, as – at long last – we return to living life as unseen Source of all we see.

Hence my Gandhian political philosophy has helped me experience ever expanding gratitude for this hallowed human lifetime, and to remember and revere the Divine Holiness of everyone, everything, everywhere.

May these memoirs about the politics of spirituality and morality similarly inspire all of us, individually and collectively, to gratefully become ever vigilant and concerned spiritual citizens of our beautiful blue planet Earth. And may we non-judgmentally and forgivingly remember the holiness of all Earth-life, until ultimately we realize that everything’s holy; and, that nothing’s really Real, but Divine LOVE.

In arriving at crucial insights about the politics of spirituality and morality, I received much inspiration from the lives and words of others. A collection of quotations which have especially helped me is now posted at https://sillysutras.com/spirituality-religion-and-politics-quotations-and-sayings/.