“I died as a mineral and became a plant,
I died as a plant and rose to animal,
I died as animal and I was man.
Why should I fear?
When was I less by dying?
Yet once more I shall die as man,
To soar with angels blest;
But even from angelhood I must pass on …”
~ Rumi

“Man’s highest aspiration – his seeking for perfection, his longing for freedom and mastery, his search after pure truth and unmixed delight – is in flagrant contradiction with his present existence and normal experience. Such contradiction is part of Nature’s general method; it is a sign that she is working towards a greater harmony. The reconciliation is achieved by an evolutionary progress.   Life evolves out of Matter, Mind out of Life, because they are already involved there: Matter is a form of veiled Life, Life a form of veiled Mind, May not Mind be a form and veil of a higher power, the Spirit, which would be supramental in its nature?   Man’s highest aspiration would then only indicate the gradual unveiling of the Spirit within, the preparation of a higher life upon earth.”
~ Sri Aurobindo

“Cosmic consciousness is infinite evolutionary impetus in each of us.”
~ Ron Rattner, Sutra Sayings

“Every adversity is an evolutionary opportunity
for everyone, everything, everywhere.”
~ Ron Rattner, Sutra Sayings 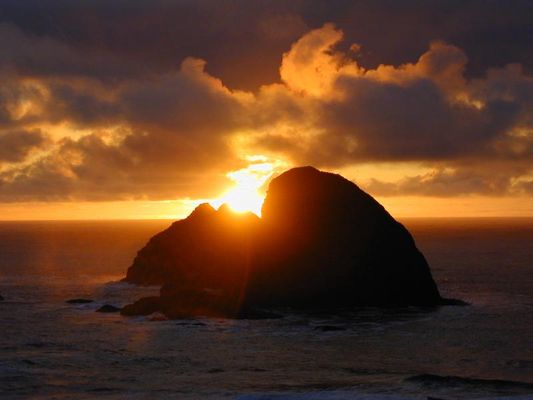 Q. Is human spiritual evolution possible? If so, is it optional or inevitable?

A. Humankind are self conscious integral aspects of a conscious, orderly and harmonious universe.
As part of such conscious cosmic order, there is an evolutionary impetus in each of us for ever expanding universal consciousness to experience itself.

We are all “pre-programmed” to transcend ego’s “optical illusion” of seeming separation as body forms from all other forms (and so from the universe), by evolving from this separation illusion to experiential realization of cosmic Oneness of all forms and phenomena as undivided Awareness.

Our universe is an ever oscillating and vibrating energy “reality”.
So, our evolutionary pre-programming involves subtle vibratory vortices – or chakras – each potentially resonant with ever ascending vibratory levels of Awareness.   As evolutionary energy – sometimes called kundalini – is awakened and activated in each being it gradually purifies and eventually opens these subtle energy centers, until ultimate transcendence is attained.

Everything that happens to us until we transcend ego’s “optical illusion” is in our best interest, because it affords an opportunity to evolve.

Although our evolutionary “pre-programming” assures that such transcendence is ultimately inevitable, our progress rate is optional, depending on what we think, do and say – individually and collectively – while misidentifying ourselves as separate.

Paradoxically, life’s most painful and difficult experiences often prove the best evolutionary opportunities, and biggest blessings,
because they most challenge and motivate surrender of ego misidentification and provide greatest transcendence incentives.

So, human spiritual evolution is inevitable, but rate of evolutionary progress is optional.

Throughout world history, philosophers and theologians have perennially asked:

‘How could an all loving, omnipotent, omniscient, and omnipresent Divinity have created this world with so much suffering, evil, violence, and misery?’

For example, influential German Christian philosopher Gottfried Leibniz optimistically postulated that God created Earth, though imperfect, as  “the best of all possible worlds”.  In his Theodicée, published in 1710, Leibniz described a harmonious universe in which all events are linked by cause and effect, and in which apparent evil is compensated by some greater good that may not be evident to the limited human mind.

French philosopher Voltaire sharply satirized and questioned that optimistic philosophy in his popular novella, “Candide”.  Without addressing subtleties of Leibniz’ philosophy, or possible causes of evil, karma or ‘original sin’, Voltaire’s protagonist “Candide” discovers, after many emotional ups and downs, that everything does not seem to happen for the best; and he concludes that each person must learn from past mistakes, and proceed stoically with kindness and virtue, no matter the pain and difficulties confronted.

After many years of experience and reflection, I have adopted a philosophy more harmonious with Leibniz than Voltaire: that everything in space/time does happen for the best – to afford impetus for spiritual evolution; that human suffering, evil, and misery are not “created” by God but by mysterious karmic causes and conditions arising from unskillful Human behaviors; that what many call “God” is indescribable, impersonal and nonjudgmental Universal Awareness which is the mysterious Source and ever immanent Essence of space/time “reality”.  I have also adopted the non-dualist philosophy that our ever impermanent energy “reality” is like a mental mirage, arising only from projected Human thought; that true Reality is universal Infinite Potentiality beyond the Human mind.

In many Silly Sutras postings I have shared these philosophies, to encourage others to decide for themselves about such perennial questions. So, my theories are not offered as expressing ultimate spiritual truths, but to inspire our intuitive and experiential introspection on ideas (often paradoxical), about who and what we are and our life’s purpose and plan, if any.

Retrospectively, I have become convinced that my life has unfolded and evolved perfectly, as if a Divine novelist was writing Ron’s life-plan script. Accordingly, my attitude toward life’s inevitable ups and downs became that everything happens ‘for the best’ – to promote our evolution; that in every adversity there is an evolutionary opportunity. (See e.g. I’ve Found A Faith-Based Life. )  So, paradoxically life’s most painful and difficult experiences often prove the best evolutionary opportunities, and biggest blessings, because they most challenge and motivate surrender of ego misidentification and provide greatest transcendence incentives.

The above posting, “Evolutionary Impetus”,  considers whether human spiritual evolution is possible, and if so, whether it is inevitable or optional.  And it elaborates my philosophy that whatever happens to us until we transcend ego’s “optical illusion” of separateness is in our best interest, because it affords incentive to evolve.  It suggests that human spiritual evolution is inevitable, but that rate of progress is optional depending on our behaviors while misidentifying ourselves as separate entities.

May these philosophical theories inspire our continuing intuitive and experiential introspection about who and what we are, and our life’s purpose and plan, if any.

And may they help us find ever more joy and fulfillment in our unique life experiences.