While gradually becoming interested in Eastern spiritual ideas, I persisted in trying to understand scientifically my continuing unexplained metaphysical experiences.

So I subscribed to Psychic Magazine and looked for other possibly relevant writings. Then, synchronistically, I found and read with tremendous interest and fascination a medical case study book by Lee Sannella, MD, entitled: “Kundalini-Psychosis or Transcendence” about an esoteric psychophysiological transformation process long known to Indian yogis and adepts but not to Western medicine; a process initiated by awakening of dormant ‘kundalini’ life force energy at the base of the spine.

Some of the many extraordinary psychic phenomena which I was then experiencing, I associated with India. Perhaps the most surprising and memorable of these experiences happened one night while I was fast asleep in my studio apartment.

In the middle of the night, I was suddenly awakened and sat up in bed with open eyes in the completely dark room. Before me, I beheld in startled amazement the clear image of a woman’s face and upper torso, wearing a head scarve common to Hindu women. But instead of appearing in life-like colors the woman’s image was all luminous gold. Next, the golden female image was replaced by another amazing image; in its stead, I beheld my own clear image also in luminous gold, as if the Indian woman’s golden image had morphed into mine, or as if my image had emanated from that of the Indian woman.

It was especially startling for me to be viewing in front of my physical body, my own luminous image. Since beholding those extraordinary golden images, I have wondered why they appeared and their significance, if any.

I can not yet say why I so beheld my own image. But ensuing events seemed to resolve the puzzle of why I had seen an image of an Indian woman when I then knew no Indian woman and hardly anything about Indian culture.

I later learned of the importance in Hinduism of the Divine Mother conception and of various deity forms representing it. Foremost of those deities was Shakti – believed to manifest through female embodiment and fertility – while also existing in males as unmanifest infinite potentiality. In ensuing years, I met various well known adept Indian female spiritual teachers considered embodiments of Divine Mother. And I learned that Vedic scriptures declare Shiva and Shakti to be inextricably associated with each other in this phenomenal world, as the male and female aspects of the Divine.

The goal of the kundalini yoga transformative process is ascent of activated Shakti life force energy from the base of the spine to the highest energy vortex (or chakra) atop the cranium where – in the pinnacle of human experience – Siva and Shakti merge in Divine illumination.

Renowned 19th century mystic saint Ramakrishna Paramahamsa – with whom I later felt great affinity – legendarily worshiped Divine Mother as Kali, who revealed Herself to him as a “a limitless, infinite, effulgent Ocean of Consciousness” only after he threatened suicide if She did not appear. Thereafter, Ramakrishna taught that God is both formed and formless and can appear to the devotee either way.

Apart from these unforgettable golden image visions, also suggestive of India had been my spontaneous and continuous recitation in Hawaii of “Rama”, an Indian name of God, and the unexpected appearances of Mahatma Gandhi as my first spirit guide.

Later I had repeated inner appearances of an elderly man with a beard who didn’t look like a modern Westerner, but like an Indian. I had not yet begun any meditation practice. But, before retiring I would often close my eyes in quiet contemplation and sometimes see ‘inner pictures’. One of those inner pictures which kept recurring was the somewhat blurred form of the same elderly bearded Indian man.

To satisfy my curiosity about why I was having these inner experiences, and about the esoteric kundalini process, I wanted to meet Dr. Sannella, who practiced in the Bay Area as both a psychiatrist and ophthalmologist. So, on learning that he was a principal officer of the California Society For Psychical Study, I joined the society and began attending its bi-monthly meetings, where I met him.

One evening in early April 1978, I attended a regular meeting of the San Francisco Psychic Society. As I entered the room, I saw a poster announcing a forthcoming series of meditation programs at the University Christian Church in Berkeley. The poster featured a prominent picture of an elderly man with a gray beard. (See photo below.) As the meeting progressed, I irresistibly kept looking at the poster. Something about the picture of the old man fascinated me.

A crucially pivotal new life phase was about to begin. I was about to evolve spiritually from being a secular Hebrew, to becoming a “born-again Hindu”. 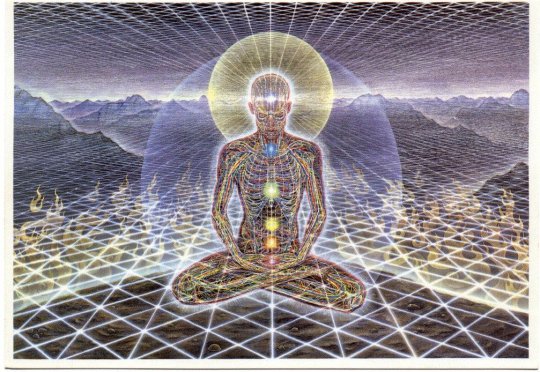