“Not Christian or Jew or Muslim,  not Hindu, Buddhist, Sufi or Zen.
Not any religion, or cultural system.  I am not from the East or the West,nor out of the ocean or up  from the ground,
not natural or ethereal, not composed of elements at all.
I do not exist, am not an entity in this world  or the next,
did not descend from Adam and Eve  or any origin story.
My place is placeless, a trace of the traceless.  Neither body nor soul.
I belong to the beloved  have seen the two worlds as one  and that one call to and know,
First, last, outer, inner, only that  breath breathing human.”
~ Rumi, ‘Only Breath’

“Wherever I look, I see men quarreling in the name of religion — Hindus, Mohammendans, Brahmos, Vaishnavas, and the rest.
But they never reflect that He who is called Krishna is also called Siva, and bears the name of the Primal Energy, Jesus, and Allah as well–
the same Rama with a thousand names.
A lake has several ghats.
At one the Hindus take water in pitchers and call it ‘jal’; at another the Mussalmans take water in leather bags and call it ‘pani’. At a third the Christians call it ‘water’.
Can we imagine that it is not ‘jal’, but only ‘pani’ or ‘water’?
How ridiculous! The substance is One under different names, and everyone is seeking the same substance;
only climate, temperament, and name create differences.
Let each man follow his own path. If he sincerely and ardently wishes to know God, peace be unto him!
He will surely realize Him.”
~ Sri Ramakrishna, The Gospel of Sri Ramakrishna

“Today, … any religion-based answer to the problem of our neglect of inner values can never be universal,
and so will be inadequate.” . . .
“[T]he time has come to find a way of thinking about spirituality and ethics that is beyond religion.”
~ Dalai Lama

“Irrevocable commitment to any one religion is not only intellectual suicide;  it is positive unfaith because it closes the mind to any new vision of the world.”
~ Alan Watts

“If there is love in your heart you don’t have to worry about rules.”
~ Shri Dhyanyogi Madhusudandas 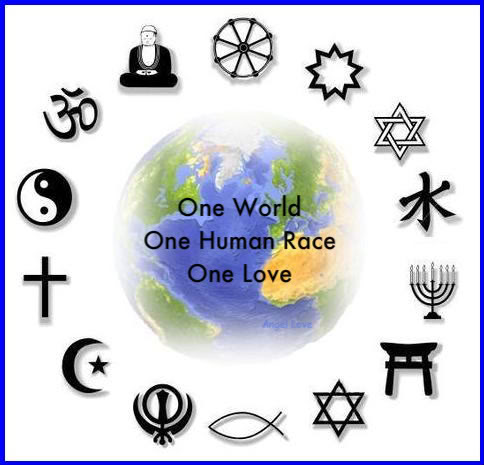 Soon after my spiritual awakening I became concerned and reflected on why Western monotheistic fundamentalism had often resulted in religious crusades, inquisitions, and jihads against alleged heretics or nonbelievers in the one true God or Messiah. And I later learned that some Eastern religions also had violent fundamentalist sects. [see https://sillysutras.com/monistic-musings-reflections-and-questions-on-god-and-divinity/]

The following sutra essay/poem about need for a new societal paradigm of universal kindness and compassion beyond religion, was composed long before launching of the SillySutras website. However, in 2012 it was first posted online together with the above quotations, encouraged by prior publication of the Dalai Lama’s book Beyond Religion: Ethics For A Whole World.

So on initially composing and later posting this sutra/poem, with above quotations, I was mainly concerned about evils perpetrated in the name of fundamentalist religious beliefs. Such concerns are explained in detail in the following mp3 recitation of the poem, in which I propose that humankind transcend religious dogmatism and separatism to harmoniously live together as LOVE.

However as explained in recent postings about Spirituality, Religion and Politics I’ve become increasingly aware that fundamental issues of spirituality, morality and politics are often inextricably intertwined.  Consequently I’ve become concerned that (as well as religious belief systems) political and economic fundamentalism can foment harmful fears and violence.

So I’ve hereafter updated this posting with comments and quotes explaining why we need to end all political, economic, and religious belief “isms” which mentally separate us, to “live ismlessly as LOVE!”

And all other belief “isms”.

So, let us transcend
Ism dogmatism

As explained in the above Introduction, since “New Paradigm-ism” was first posted in 2012, I’ve realized that fundamental issues of spirituality, morality and politics are often inextricably intertwined. So as a deeply dedicated social justice advocate I’ve become aware that, not only religious belief systems, but political and economic beliefs can foment ignorant fears and violence; that as wisely written by Dr. Martin Luther King while wrongfully jailed in Selma, Alabama, “injustice anywhere is a threat to justice everywhere.”

This is so because:

In religion and politics people’s beliefs and convictions are in almost every case gotten at second-hand, and without examination, from authorities who have not themselves examined the questions at issue but have taken them at second-hand from other non-examiners, whose opinions about them were not worth a brass farthing.
~ Mark Twain, Autobiography


So, in addition to the above quotations about religious fundamentalism,
I respectfully request our careful reconsideration and reflection upon the recently posted quotation collection about Spirituality, Religion and Politics.

May our compassionate reflections advance humankind’s inevitable transcendence of religious dogmatism and illusionary ego/mind separatism, to harmoniously live together as LOVE.