“There is no liquid like a tear from a lover’s eye.”
~ Rumi

“Crying to God for five minutes is equal to one hour of meditation.”
“The state that we attain by calling and crying to God
is equal to the bliss that the yogi experiences in samadhi.”
~ Mata Amritanandamayi  (Ammachi)

Tears are the solution
for dissolution
of other
into Mother –
Mother of All,
Mother of Mystery.
~ Ron Rattner, Sutra Sayings 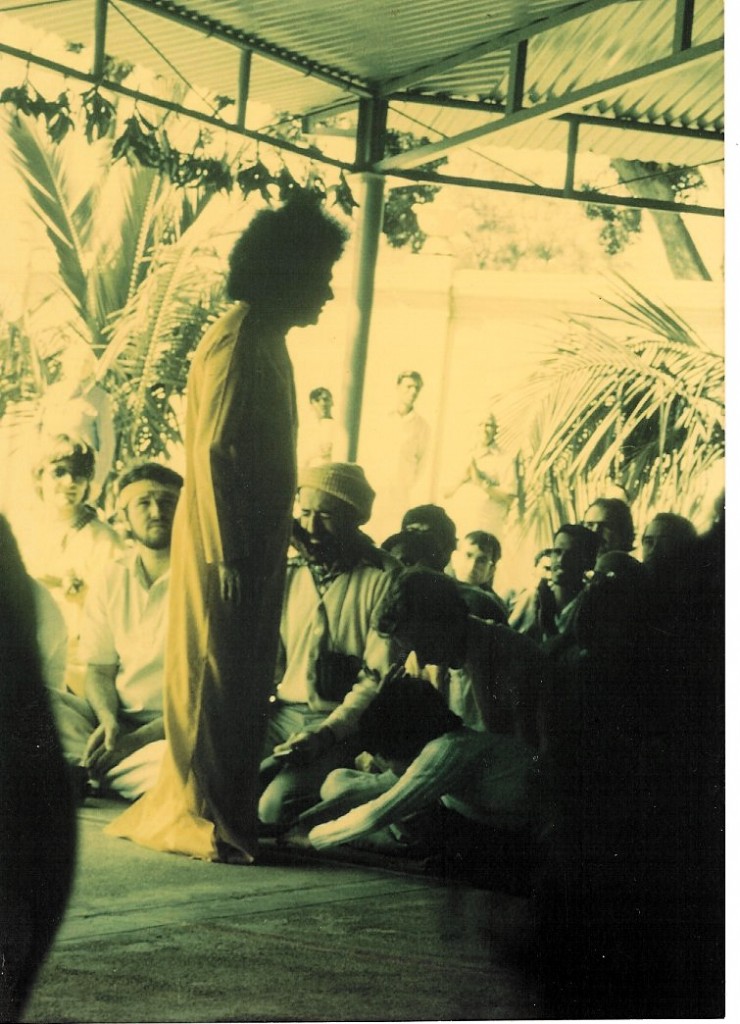 In January and February 1982, four years after receiving shaktipat from my beloved Guruji, Shri Dhyanyogi Madhusudandas, and with his approval, I journeyed on a wonderful spiritual pilgrimage to Japan and India led by Sant Keshadavadas, another Indian guru.

On embarking for India I wanted to learn about Indian spiritual culture and its many saintly beings, other than my beloved Guruji. And I was very curious about how I could best advance my quest for “enlightenment” – my spiritual “sadhana”.

During that marvelous guided pilgrimage tour I had numerous unforgettable spiritual experiences from which I learned much. Thus, the journey became and has remained the most important trip of my lifetime. So I am recounting some highlights in these memoirs.

At the time of our pilgrimage, one of the few living Indian gurus of whom I’d previously heard was Sri Sathya Sai Baba, who was the claimed reincarnation of Shirdi Sai Baba, a legendary saint who had died in 1918. I synchronistically learned about Sai Baba shortly before our tour departure on meeting an ardent Swedish devotee, Carin, who was in San Francisco en route to seeing him India.

Carin said that Sai Baba was renowned for his extraordinary powers (siddhis)* [see footnote].And she recounted to me many amazing stories about Sai Baba – of miraculous materializations, healings, clairvoyance, bilocations, and alleged omniscience – including her own experience of his appearing to her in Sweden in a vivid vision and beckoning her to visit him in India. And I learned from Carin that Sai Baba had millions of devotees worldwide, even though he had never left India, except for one trip to Africa. So I became quite curious about Sai Baba and wished to but didn’t expect to see him in India.

Sai Baba usually resided at his main ashram at Puttaparthi, India, and our pilgrimage itinerary did not include any planned visit there. But Carin told me that Sai Baba had a large ashram in Bangalore at Whitefield, where he occasionally visited. Our tour was scheduled to be in Bangalore for three days. So on Carin’s departure for an extended stay at Puttaparthi, I gave her our tour itinerary and she promised to call me in case Sai Baba might visit his Whitefield ashram when we were in Bangalore. I didn’t think that would happen. But synchronistically it did.

Shortly after our tour group checked into the luxurious Hotel Ashoka in Bangalore, I received a phone call from Carin telling that Sai Baba would be giving public darshan at Whitefield the next Monday morning – when fortuitously we had open time. Carin promised to pick me up in a taxi very early Monday morning to assure our finding space at Whitefield, and she suggested that I bring any other interested tour members. Thereupon I arranged for my friends Ramdassi and Tara, and Tara’s friend Pat, and a few others to join us.

Before dawn on Monday, February 1, 1982, Carin arrived at our hotel as promised. And together with my friends and other tour companions we went by taxi to Whitefield for Sai Baba’s darshan. En route, Carin suggested that we ask Sai Baba for a private audience, since he sometimes granted such last minute requests to spiritual pilgrims.

I immediately agreed, hoping to ask Sai Baba how I could best advance my quest for “enlightenment” – my spiritual “sadhana”. So Ramdassi artistically wrote an audience request for me to show him, if possible.

Although Sai Baba didn’t later grant a private audience, I had with him one of the most memorable darshan experiences of my life. Here is what happened.

On arrival at the Whitefield ashram, we were guided to a large canopied outdoor area next to the ashram building. There, we awaited Sai Baba’s appearance with hundreds of others who were already sitting side by side in numerous rows. Women and men were seated separately. I was seated near the end of the men’s darshan area furthest from the portal through which the Swami would later appear. 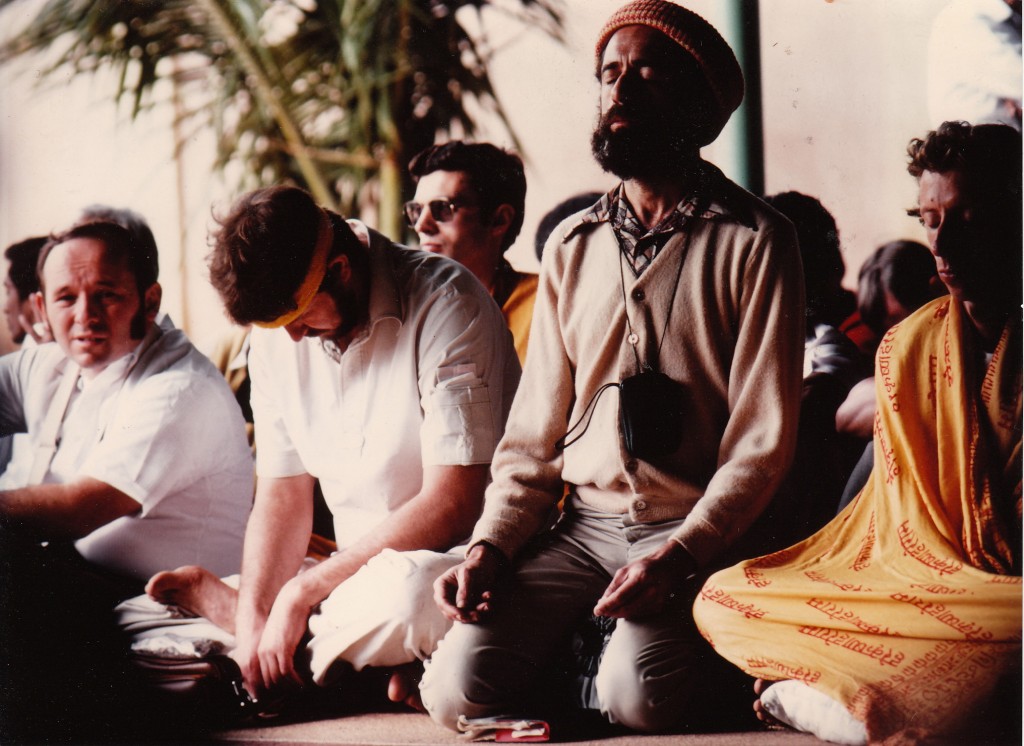 Soon I went into a deep meditation and lost track of time. But even from that state, I was aroused and opened my eyes on sensing Sai Baba’s immense shakti field as he emerged from the ashram and entered the darshan area. With spontaneous emotion of devotion, I began weeping intensely.

Through my tears I could glimpse Sai Baba slowly walking up and down the aisles of aspirants. Though he looked at each person he did not stop at anyone – until ultimately he reached me.

Whereupon, Sai Baba stopped in front of me. With extraordinarily beautiful eyes he intently gazed at me as I was crying uncontrollably and wondering how to further my “sadhana”. Then he hit me on top of the head three consecutive times with his right hand, each time uttering only one word:
”Enough!” ”Enough!” ”Enough!”
With these hits on the head, I experienced a remarkable infusion of “shakti” energy.

Then Sai Baba soon left without stopping anywhere else. On his departure, I was left highly “enshakticated”, but in an unprecedented state of confusion.

It seemed that in exclaiming ”Enough!” ”Enough!” ”Enough!” Sai Baba had admonished me to stop crying. But that would have been completely inconsistent with my devotional path (bhakti) which strongly encourages and stresses the importance of crying for God.

Though my confusion about the meaning of Sai Baba’s darshan persisted for many years, I did not – and could not – stop weeping for God with emotion of devotion. And gradually I became confident that Sai Baba was not discouraging my gift of tears; that, rather, he was encouraging and blessing me to at long last ‘say sayanara to samsara’.

Since my unforgettable darshan with Sai Baba, the universe has given many messages and hints that Sai Baba’s exclamation
”Enough!” ”Enough!” ”Enough!”
was not an admonition to stop or limit spontaneous devotional crying.

The first of these messages happened later that same Monday in Bangalore. Our previously scheduled afternoon tour activities were cancelled at the last minute. So we were given unexpected free time. Thereupon my friends Ramdassi, Tara and Carin and I decided to visit the beautiful Bangalore temple of Shiva Bala Yogi, a reputedly powerful God Realized shaktipat guru who was previously unknown to us. 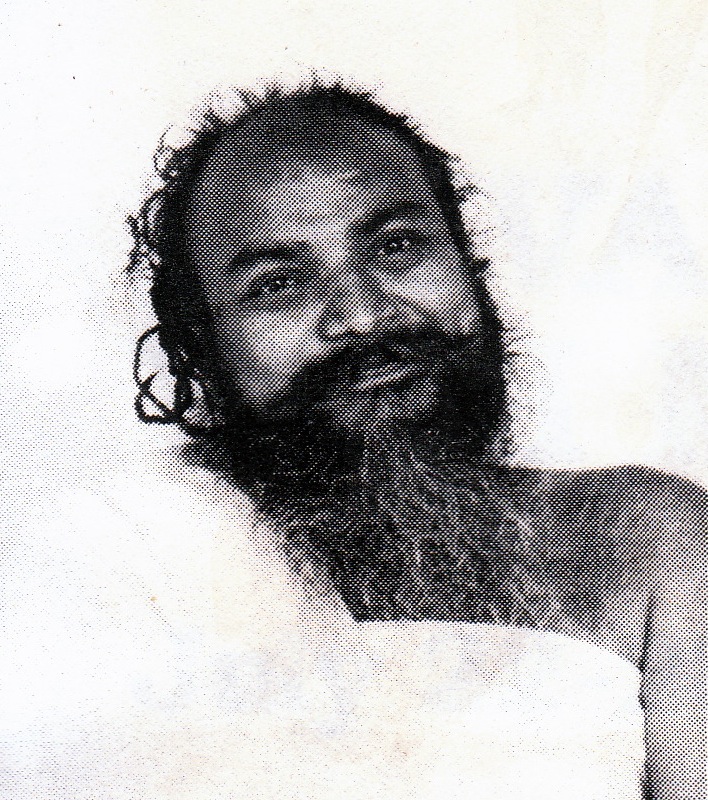 Fortuitously, on our arrival at his temple, Shiva Bala Yogi was there giving darshan – and even answering written questions from spiritual aspirants. So, still “enshakticated” from Sai Baba’s three hits on the head, I asked Shiva Bala Yogi the question I hadn’t been able to ask Sai Baba:
“What should I do for my sadhana?”
He replied, simply:
“Do what you are doing.”
And so I did.
**[see footnote]

Soon afterwards, I received another memorable message from Sai Baba. The next day, Tuesday, our tour departed Bangalore, which was in the center of India, and we flew westward to Mangalore near the Arabian Sea. There we were lodged at an oceanside beach resort. Awakening early Wednesday morning, I decided to jog on the beach before our scheduled activities for that day. Whereupon, I had an unforgettable reminder of Sathya Sai Baba and a possible hint about the meaning of his darshan.

While jogging by the ocean with a stilled mind, I suddenly perceived that I was surrounded and completely enfolded by the body of Sai Baba; that my entire physical body was totally enveloped by the subtle body of Sai Baba. Later I took that unique experience as a metaphoric reminder and symbolic portent that we are as but cells in the body of the Divine with which we will inevitably merge, after we’ve had “enough” worldly suffering.

* Patanjali’s renowned Yoga Sutras, describe yogic powers which may be attained through control of life-force energies. But Patanjali warns aspirants against premature use of of such powers prior to God union, as possibly raising egotistic obstacles to attainment of the spiritual goal. Only after being irrevocably established in God union may the yogi employ powers, without karmic consequences. Especially after Sai Baba’s death in 2011, his frequent display of siddhis became controversial, with various claims that they were sometimes not used for Divine purposes. Also, there were other allegations of questionable conduct.

Despite these allegations, I remain convinced that Sai Baba’s darshan blessed and helped me. In hitting me on the head three times he imparted a tremendous infusion of divine shakti; and his concurrent admonition ”Enough!” ”Enough!” ”Enough!” was probably a blessing helping me to use that precious life force energy to transcend all remaining worldly attachments with inevitable suffering of which I’d had “enough”.

**A month later, I asked Guruji the identical question, “What should I do for my sadhana?” Guruji answered it differently, but unforgettably. See https://sillysutras.com/a-long-but-short-guruji-satsang-story-rons-memoirs/