All things appear and disappear because of the concurrence of causes and conditions. Nothing ever exists entirely alone; everything is in relation to everything else.
~ Buddha 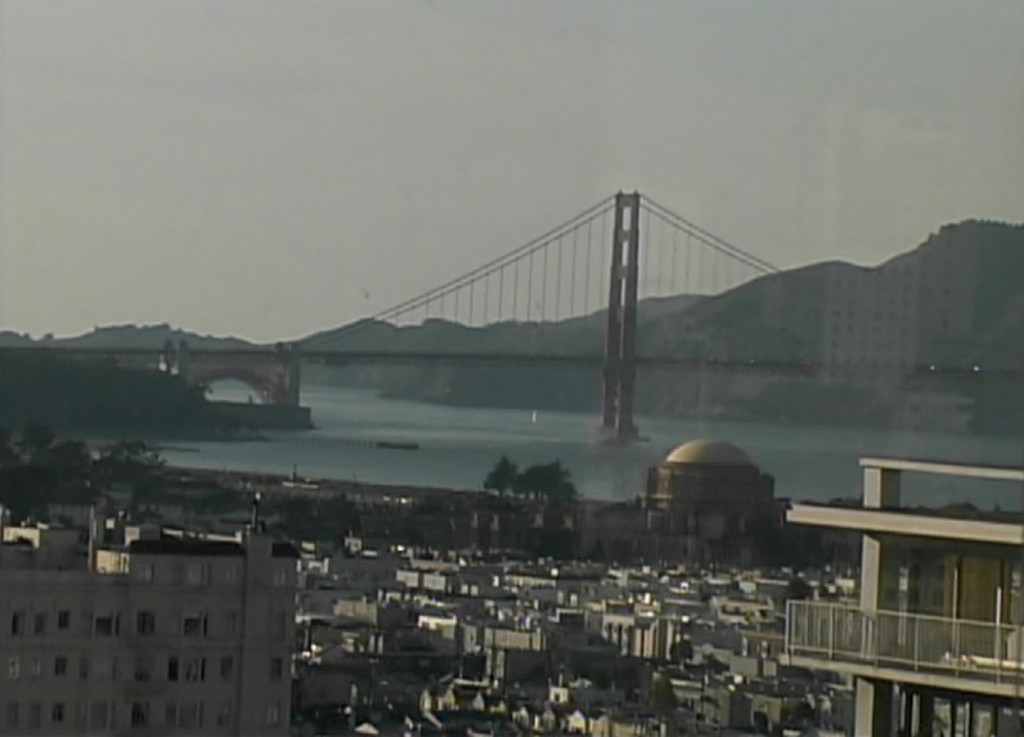 
In deciding to move to San Francisco from Chicago I was attracted by San Francisco’s climate, physical beauty and ambiance. Within its boundaries there are more than fifty hills, several islands, and significant stretches of Pacific Ocean and San Francisco Bay. So, some lucky San Franciscans enjoy wonderful views from their dwellings and working places.

When Naomi and I arrived in San Francisco in 1960, I was immediately attracted to view places, especially places with Bay and Golden Gate views. Though Naomi did not seem to share my great aesthetic appreciation of view places, our first tiny apartment was situated atop Buena Vista hill, and enjoyed a lovely Southeast panoramic city and Bay view. But we soon outgrew that apartment and rented a larger place in a more elegant neighborhood, without any view, where we resided for most of our remaining fifteen married years. But I never lost my love of view places, and ultimately rented law offices with lovely views.

Upon divorce, I moved into a one room furnished studio apartment without a view, intending later to find a larger unfurnished view apartment. My studio apartment was in a very large high-rise building with a magnificent panoramic view from its roof deck, which I sometimes enjoyed. When standing on that roof, I noticed a few corner apartments in the high-rise building across the street, with obviously wonderful views of the Bay and Golden Gate Bridge.

“The people living in those view apartments are lucky,” I thought, without imagining myself as a fortunate one of them. I remained in the studio apartment for over two years planning, but not actively trying, to move.

One morning as I left my studio apartment and was about to walk to work I met in the elevator, Mark, an upstairs neighbor and real estate lawyer. Mark offered me a ride to the financial district which at first I declined, telling him I preferred walking. But he persisted and urged me to join him – and I agreed. Whereupon he told me that before driving, he was going across the street (to 1998 Broadway) for a few minutes to register on a waiting list for an apartment rental there. And at his request, I accompanied him.

As we walked across the street, Mark told me that all apartments at 1998 Broadway were soon going to be converted from rentals to condominiums. He said he was registering to rent because tenants would be given the first option of purchasing their rented apartments, a good “investment” opportunity. Then he importuned me to also register for an apartment there.

Until this time I had been so occupied with my law practice and in adjusting to life as a single person, that I hadn’t yet looked for an unfurnished apartment. And I wasn’t then in the mood to do so. So at first I was reluctant to register for an apartment across the street before evaluating possible alternatives. But Mark explained that registering for an apartment at 1998 Broadway would not oblige me to take any apartment offered to me.

So I followed Mark’s well meaning advice and told the office manager that I too wished to be wait-listed for an apartment. She asked me whether I wished a one, two, or three bedroom apartment and if I had any other requirements. Without thinking I responded, “whatever first becomes available”.

Many months passed. I met Dhyanyogi, was fully occupied with personal and professional activities, and had almost forgotten about that apartment waiting list. Then I was surprised by a call from the 1998 Broadway building manager informing me that an apartment had become available for me.

She said she needed to rent it promptly and that she was calling me because she had been unable to contact Mark, who was ahead me on the waiting list, but out of town. I told her I’d call her back later in the day. Only after confirming that Mark was traveling abroad and was unreachable, did I tell her that I would promptly come to see the newly available apartment.

Miraculously, it was one of those few view apartments that I had noticed from the roof of my building across the street. It was apartment #1204 with two bedrooms and two baths, and the fourth best Bay and Golden Gate Bridge view in the entire 82 unit building.

On beholding the panoramic view, I immediately signed rental papers, and soon moved into apartment #1204. But, I felt concern about Mark, who was my benefactor but had missed this opportunity. However, the universe soon assuaged my concern. Shortly after Mark returned to San Francisco, he was called to rent an apartment above mine, #1404 with an even more panoramic view. I was happy that the waiting list sign-up thus turned out to be very lucky for both of us.

But renting my view apartment was only the beginning of this “manifestation miracle”. After I had been renting the apartment for about a year, Mark’s prediction of potential apartment ownership proved prescient. All tenants were notified that there were new owners of the building who intended converting it to condominiums.

Under San Francisco ordinances at that time, the new landlords were required to obtain majority tenant ratification of their conversion subdivision plans. So a tenants’ committee was organized to negotiate with the new owners. Mark and I were then the only lawyers in the building, and were asked to help with our legal skills. I agreed, but Mark was mostly busy with other matters.

After spending much time in legal research and in personally checking building records at City Hall and at the Department of Public Works, I discovered some significant “loop holes” enabling the tenants to exert much unforeseen bargaining power with the new landlords.

Ultimately, my legal work enabled the tenants’ committee to negotiate significantly reduced proposed purchase prices for those who wished to buy their apartments, plus generous bonuses for tenants who elected to move-out. I believe that aggregate value of these price reductions and move-out bonuses was about $2 million.

Tenant negotiators Alyce and Leonard Brown told me that the negotiating committee intended to accept the landlord’s latest offer, and invited me to attend their final meeting with the developer and his attorney. At the meeting, to my amazement, the committee informed the landlord that his latest offers of price reductions and move-out bonuses were acceptable, only subject to one further condition – that he pay Ron Rattner a very large specified fee for legal services rendered to the tenants.

The landlord immediately agreed to this condition, and I soon received, for legal services which I had intended as a pro bono gift to all my neighbors, what proved to be the largest legal fee of my entire professional career. That fee not only covered my condominium purchase down-payment but much of the rest of the purchase price as well.

For over thirty years the apartment has been the happiest dwelling place and best financial investment of my adult life. Moreover, in 1981, my apartment was the last place in the USA where Guruji stayed before returning to India.

His presence was another great gift, and it imbued the apartment with lasting spiritual energies and “good vibes” in addition to its wonderful view – all of which have continuously nurtured my spiritual evolution during a long and transformative life period.

So, I consider my condominium “high-rise hermitage” a synchronistic gift from the Universe and an important “manifestation miracle”, for which I remain ever grateful.