Ask and it shall be given; Seek and ye shall find.
~ Matthew 7:7 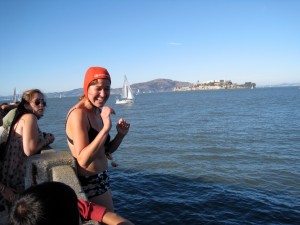 During my frequent walks to Aquatic Beach, I occasionally met there a lovely young woman swimmer, Simone, who found time to swim. while attending school and working to support herself. Several times we talked before or after her swims. During one of our chats, Simone remarked to me that some day she’d like to swim out at the opening of the harbor where it was deep with different tides than those closer to the beach where she was then swimming. But she said that she was afraid to swim there alone, and wouldn’t try to do so without others accompanying her.

Later, in November on a beautiful sunny Sunday afternoon, I took one of my frequent walks out onto the San Francisco Municipal Pier. The pier juts far into the Bay and is a breakwater for the Aquatic Beach harbor. The deep waters at the end of the pier had enticed Simone as a new place to swim, but her fears had precluded that experience.

As I walked toward the very end of the pier, I saw a large crowd gathered there. Never before in many such walks onto the pier had I ever seen such a crowd. So I was quite curious as I neared them. And when I arrived at the end of the pier, I discovered that the people were gathered around and observing a young woman in a swimsuit who had climbed over the wall of the pier, and was standing on the ledge above the water, poised but afraid to dive into the water. It was Simone, fearfully hesitating for a long time before jumping off the pier to swim back to Aquatic Beach.

As we recognized each other, Simone asked for my encouragement.  I obliged and, motivated by my reassurance, Simone finally jumped into the water, as the large crowd of well-wishing onlookers cheered her on. Just as Simone finally ‘took the plunge’ I gave her a “namaste” salute. Thereafter, she swam back to Aquatic Beach with Ned, another regular swimmer with whom I also was having synchronistic encounters and chats. Responding to Simone’s wish for a deep water swimming companion, Ned had walked with Simone onto the pier and had been treading water awaiting her dive to join him in swimming back to the beach.

As Simone and Ned swam together back to the beach, I wondered how Simone would feel after overcoming her fear of swimming in such deep waters. So, I intended to quickly walk back to the beach and greet them when they arrived there. But that didn’t happen.

Instead, I had a very long and lovely synchronistic and spiritual chat with one of the other onlookers, Janice, a long-time Buddhist practitioner who had observed with curiosity my “namaste” salute to Simone. So I didn’t again see Simone or Ned that day as wished, and wondered thereafter about Simone’s experience of breaking her fear barrier about deep water swimming.

More than four months passed before I again saw either Simone or Ned. Then, on a Sunday afternoon in March, just as I began walking onto the sand at the West end of Aquatic Beach, I encountered Ned who was walking in his swim suit toward the Municipal Pier, where he planned to jump into the Bay and swim back to the beach.  We chatted for a while about that November day and about Simone.  He told me that he had seen pictures of Simone taken on the pier that day by an onlooker, but didn’t have them.  As we parted, at my request, he offered to try getting me the pictures via email exchange with Simone, with whom he’d continued to communicate.  And I asked him to give Simone my regards, expressing a desire to see her soon. We thereupon parted and I continued walking toward the East end of Aquatic Beach, as Ned walked to the pier.

A few minutes later, just as I arrived at the East end of the beach, a female swimmer emerged from the water and began drying off.   It was Simone.  My wish to see her again was almost instantly fulfilled.   Then I told her about my encounter with Ned, and wish to see pictures of that memorable November happening.   She took my email address, and later sent them.

Though neither Ned nor Simone was aware of each other’s “coincidental” presence that day on the beach, the Lone Arranger knew, and staged those quick consecutive encounters fulfilling my wish to see Simone and the November pictures of her.