“I believe in Spinoza’s God who reveals himself in the orderly harmony of what exists, not in a God who concerns himself with fates and actions of human beings.”
~ Albert Einstein

“Yes, all one’s confusion comes to an end if one only realizes that it is God who manifests Himself as the atheist and the believer, the good and the bad, the real and the unreal; that it is He who is present in waking and in sleep; and that He is beyond all these.” ….”God alone is the Doer. Everything happens by His will.”
~ Ramakrishna Paramahamsa

“The worst moment for the atheist is when he is really thankful and has nobody to thank.”
~ Dante Gabriel Rossetti 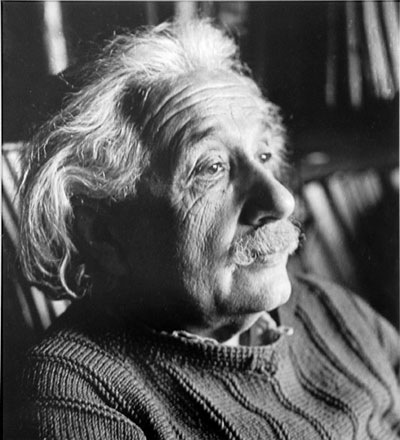 Was Einstein an Atheist?

This essay reveals that Albert Einstein was not an atheist or a monotheist; that he was annoyed by anti-religious atheists who selectively quoted him to support their erroneous contention that Einstein was an atheist.

Einstein explicitly denied that he was an atheist. But he revered and did not deny or disbelieve the existence of an impenetrable supreme universal power – which he called Universal Intelligence. He was a modern Western non-dualistic mystic whose religious views paralleled the most elevated non-dualistic ancient Vedic and Buddhist philosophies.

Albert Einstein was not only an acclaimed scientist but a wise philosopher and a pragmatic “true mystic” … “of a deeply religious nature.” (New York Times Obituary, April 19, 1955)

Einstein did not believe in a formal, dogmatic religion, but was reverently awed and humbled with a cosmic religious feeling by the immense beauty and eternal mystery of our Universe.

He often commented publicly on religious and ethical subjects, and thereby became widely respected for his moral integrity and mystical wisdom, as well as for his scientific genius.

Einstein rejected prevalent religious ideas about God, and individual survival of physical death, reincarnation, or of reward or punishment in heaven or hell after physical death. But in an essay entitled The World As I See It, first published 1933, Einstein explained his reverence for God as Eternal Universal Intelligence. He said:

Because Einstein repeatedly rejected all conventional theistic concepts of a personal “God”, atheists often eagerly have claimed that Einstein was one of them, selectively citing Einstein quotes.

Often cited by atheists is a 1954 letter, sometimes called Einstein’s “God” letter, which recently sold for $3 million dollars in an eBay auction. Handwritten by Einstein – a non-observant Jew – to German-Jewish philosopher and author Eric Gutkind, the letter explained Einstein’s rejection of theistic Jewish “God” concepts, superstitions and religious exceptionalism, despite his great appreciation of Jewish culture. It said:

“The word God is for me nothing more than the expression and product of human weaknesses, the Bible a collection of honorable, but still primitive legends. No interpretation no matter how subtle can (for me) change this.” …….. “For me the Jewish religion like all other religions is an incarnation of the most childish superstitions. And the Jewish people to whom I gladly belong and with whose mentality I have a deep affinity have no different quality ..than all other people. As far as my experience goes, they are also no better than other human groups, although they are protected from the worst cancers by a lack of power. Otherwise I cannot see anything ‘chosen’ about them.”

Though Einstein rejected the concept of “God” as it has been defined by most theistic religions, he also clearly rejected atheism, which he associated with mistaken certainty regarding nonexistence of a Supreme Power. Thus, he said:

“I have repeatedly said that in my opinion the idea of a personal God is a childlike one. … But I do not share the crusading spirit of the professional atheist whose fervor is mostly due to a painful act of liberation from the fetters of religious indoctrination received in youth. I prefer an attitude of humility corresponding to the weakness of our intellectual understanding of nature and of our own being.”

“There are people who say there is no God, but what makes me really angry is that they quote me for support of such views.” “I’m not an atheist. The problem involved is too vast for our limited minds. We are in the position of a little child entering a huge library filled with books in many languages. The child knows someone must have written those books. It does not know how. It does not understand the languages in which they are written. The child dimly suspects a mysterious order in the arrangement of the books but doesn’t know what that is. That, it seems to me, is the attitude of the most intelligent human toward God.”

“[T]he fanatical atheists…are like slaves who are still feeling the weight of their chains which they have thrown off after hard struggle. They are creatures who—in their grudge against the traditional ‘opium of the people’—cannot bear the music of the spheres.”

When once asked by an atheist whether he considered himself religious, Einstein responded:

“Yes, you could call it that. Try and penetrate with our limited means the secrets of nature and you will find that, behind all the discernible laws and connections, there remains something subtle, intangible and inexplicable. Veneration for this force beyond anything we can comprehend is my religion.”

Despite his rejection of any personal God, Einstein suggested that he would never seek to challenge orthodox religious belief in the existence of a supreme universal power, because “such a belief seems to me preferable to the lack of any transcendental outlook.” Also at times Einstein used the “God” word to explain his reverence for Universal Intelligence.

“That deeply emotional conviction of a presence of a superior reasoning power, which is revealed in the incomprehensible universe, forms my idea of God.”

And throughout his adult life, Einstein repeatedly affirmed his religious awe of that mysterious eternal power which reveals itself in “the lawful harmony of all that exists.”

Albert Einstein was not an atheist; he did not deny or disbelieve the existence of a supreme universal power. He was a modern Western non-dualistic mystic whose religious views paralleled the most elevated non-dualistic ancient Vedic and Buddhist philosophies.

Einstein’s rejection of prevalent religious ideas about God and individual survival of physical death and afterlife was consistent with his revolutionary non-mechanistic science as well as with ancient Eastern non-dualistic teachings that apparent separation between subject and object is an unreal “optical illusion of consciousness.”

But Einstein’s mystical views – like his non-mechanistic science – have been very difficult for Western materialist minds to comprehend because they question the substantiality of matter and the ultimate reality of space, time and causality.

And like non-dualistic Eastern mystics, he was reverently awed and humbled with a cosmic religious feeling by the immense beauty and eternal mystery of our Universe, whose Source he venerated, saying:

Thus, Einstein was a non-dualistic mystic who venerated a supreme universal power which he called Universal Intelligence. He was not an atheist or a monotheist.

Thousands of years ago mystics were able to solve the deepest mysteries of physics with only their power of mind. Einstein made great strides in at long last reconciling modern physics with ancient mysticism.

May he ever inspire contemporary scientists to transcend mechanistic mental blinders and to merge physical science with mystical science, bringing us out of the darkness of ignorance into a bright new age of peace and harmony on our precious planet.