“ ‘Reality’ is a holographic theater of the mind.”
~ Ron Rattner, Sutra Sayings

“This world is wrought with naught but thought.”
~ Ron Rattner, Sutra Sayings 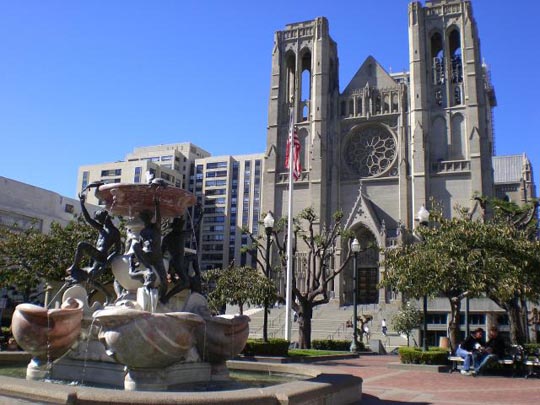 In The Luckiest Day of My Life ~ Meeting My Spiritual Master, I shared with you that in 1978 I serendipitously met and and received shaktipat initiation from my spiritual master, Sri Dhyanyogi Madhusudandas; and that afterwards I was fortunate to see and be with him on various memorable occasions before he returned to India in 1980. Here I will describe the first of those meetings which was especially revelatory and memorable.

Soon after the shaktipat initiation, I received a phone call from Kusuma, then one of Guruji’s translators and cooks, who had moved to the East Bay from Bombay. Guruji was then staying with Kusuma and her family in an Oakland apartment.

She informed me: “Guruji would like to go to San Francisco to see Grace Cathedral and Saint Mary’s Cathedral”, and she asked if I would come there the next day to show him these significant shrines. Since I had no conflicting office or court appointments I readily agreed, considering it a great privilege.

At that time I owned an almost new two door Volvo sedan [with license #108-MQJ] which I had purchased on separation from my ex-wife (who kept our one family car). The Volvo had numerous problems which had caused me considerable annoyance and buyer’s remorse, and many extra trips to the Volvo dealer. I had even purchased “The Lemon Book” by Ralph Nader, and was considering a manufacturer take-back request.

The next day, in my Volvo, I arrived punctually at Kusuma’s Oakland apartment and rang the doorbell. Soon Guruji emerged accompanied by his American successor, Anandi Ma, and by Saskia, a doctor and acupuncturist from Holland.

After the women got into the back of the car, I helped Dhyanyogi into the front ‘bucket’ passenger seat, and asked him: “Guruji, can I fasten your seat belt?” To which he responded: “That won’t be necessary.”

This reply was the beginning of a very surprising and extraordinary day for me. And as an ‘up-tight’ lawyer concerned about complying with California’s seat belt law, it was the unsettling first time that anyone in my car hadn’t fastened their seat belt.

Yet, he was the Guru. So for the first time, I began driving feeling a bit “unhinged” with an unbuckled front seat passenger. Within a few minutes, I had another unprecedented, extraordinary experience.

As we arrived at the Bay Bridge toll gate plaza, I lowered the car window and grabbed three quarters to pay the 75 cent toll. I extended my open hand with the coins toward the toll taker, who reached out to receive them. But suddenly he looked at Guruji and stopped reaching. Instead of taking the quarters, he waived us on, saying: “You look like nice people. Go ahead!”

So, for the first time in my life, with an unbuckled front seat passenger, I crossed the Bay Bridge toll bridge toll free. On the San Francisco side of the bridge, I turned off the freeway and drove toward the Grace Cathedral atop Nob Hill. En route we passed the International Building, where I then had my law office on the 21st floor. So, I exclaimed spontaneously: “Guruji, my office is at the top of that building”. “Very good,” he responded. And we drove on.

Soon thereafter, I had another extraordinary and unprecedented experience. As we approached Grace Cathedral, I began my then customary inner dialogue with the “voice in my head”, thinking about where I’d park, what I’d show Guruji, what might interest him, and other similar thoughts. But as this inner dialogue was happening Dhyanyogi would regularly make some ‘casual’ comment relevant to my thoughts – as if to answer or comment on that “voice in my head”. Subtly he was letting me know that he could read my thoughts. And I soon ‘got’ that message.

Prior to that day, and following my rebirth experience, I had experienced unwitting moments of knowing thoughts of others. So, I realized that such ‘mind reading’ was possible. But this was the first time that I had ever been with someone who could read minds at will.

Guruji’s most dramatic and memorable demonstration of his clairvoyant powers that day, happened on conclusion of our sight seeing trip to San Francisco. After visiting Grace Cathedral and Saint Mary’s Cathedral, I drove us back to Oakland, parked in front of Kusuma’s apartment building, and quickly got out of the Volvo so I could open the passenger side door and help Guruji exit the car.

As I opened his door, I asked: “Can I help you Guruji?” Instead of answering that question, he said: “This is a very nice car. Would you like me to bless it?” Stunned, I replied, “Yes”. So he blessed the Volvo and got out without my help. Then I pushed forward his vacated seat and helped Anandi Ma and Saskia exit from the back seat.

On driving across the Bay Bridge back to San Francisco, I used the unspent quarters saved in my earlier crossing. Returning home, I realized that Dhyanyogi was not only able to read my thoughts as they happened in serial time, but that he apparently knew my past thoughts about the Volvo “lemon”. And I wondered if he had influenced the mind of the Bay Bridge toll taker to let us pass without paying.

The next morning, I experienced a “miraculous” epilogue to that unforgettable “sightseeing trip” with Guruji. On entering my twenty first floor office, the office was completely suffused with the ambrosial fragrance of roses. But, its windows were sealed, and there were no roses to be seen anywhere in the entire law office suite. So, how did that happen?

Soon afterwards I told Anandi Ma about the rose fragrance episode and asked if she could explain it. Smilingly she replied: “Oh, that’s Guruji’s calling card, when he makes astral visits”. Later, I had repeated experiences of rose fragrance ‘visits’ by Guruji and other living mystics. And in 1992 I experienced the scent of violets while meditating in Italy at the tomb of St. Padre Pio, who during his lifetime was known for that “miracle”, amongst others. Padre Pio’s posthumous ‘visit’ then, reminded me of the survival of our subtle bodies, after demise of the physical form.

Oh yes, there was still another amazing epilogue to that unforgettable “sight-seeing” trip. Miraculously after Guruji blessed the Volvo, I drove it for many more years before encountering another problem. “The Lemon Book” by Ralph Nader became an unnecessary possession, as I enjoyed trouble-free Volvo driving.

Spurred by that experience, I began wondering how a powerful person’s mind could so influence apparently inanimate matter. Gradually, I came to the conclusion that all forms in this “reality” are manifestations of “congealed” consciousness; that focussed mystic minds from subtle causal planes could mentally affect gross forms in denser planes with powerful thoughts. This new-found consciousness paradigm arose from continuing experiences with Guruji and other mystics, and from other inner and and outer experiences, some of which I will share with you.