“I’m only a cockeyed optimist . . .
stuck like a dope
With a thing called hope,
And I can’t get it out of my heart!”
~ Oscar Hammerstein II, South Pacific, lyrics

“The highest thinkers of the ages,
the seers of the tribes and the nations,
have been optimists.”
~ Helen Keller

“An optimist is a person who sees a green light everywhere, while a pessimist sees only the red stoplight… the truly wise person is colorblind.”
~ Albert Schweitzer

“Even faith in God is only a stage on the way.
Ultimately you abandon all, for you come to something so simple that there are no words to express it.”
~ Sri Nisargadatta Maharaj 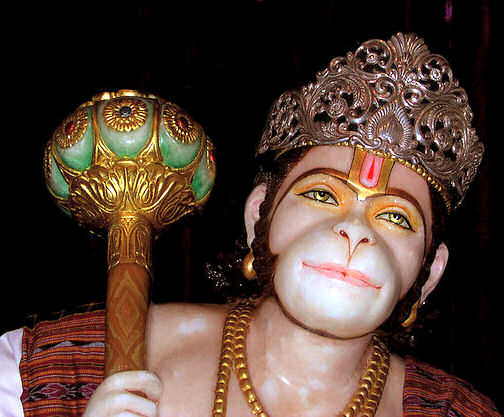 Introduction to “Becoming a Faith-Based Optimist”

And because these memoirs are published on commencement of important Equinox religious holy days, I’m including a 2022 Equinox Epilogue.

Memoirs of “Becoming a Faith-Based Optimist”

Soon after receiving 1978 shaktipat initiation from my beloved Guruji, I began daily Sanskrit recitations of a Ram mantra and the Hanuman Chalisa – a rhymed poetic ode to the mythological Vedic ‘monkey-god’ Hanuman (pictured above). The Hanuman Chalisa (composed by poet-saint and philosopher Tulsidas) metaphorically venerates Hanuman, who faithfully served Hindu avatar Rama, as the epitome of faith in God.

Shri Ramakrishna Paramahansa (with whom I feel deep devotional affinity) often cited an epic Ramayana story about Hanuman heroically leaping over the sea between South India and Shri Lanka (Ceylon) to serve Rama, as illustrating the epitome of divine faith. In the Gospel of Ramakrishna, he taught:

While repeatedly reciting Ram mantras and the Hanuman Chalisa, I felt their devotional energy while unconcerned about their precise Sanskrit meaning. And I became instinctively harmonious with Ram, as Divinity. Even today (at almost age ninety), I still often instinctively call out to Rama in devotionally honoring the Divine. And Hanuman energy became and remains for me symbolic of both enduring Faith and immutable optimism.

After I became an instinctive Rama devotee, I realized that my initial secular self-confidence and optimism had gradually grown to heartfelt Faith in God; that I’d evolved from being a pragmatic secular optimist into living a devotional faith-based life, with both conviction and optimism.

Also, I realized that with Faith it’s always best follow one’s conscience in all behaviors, and to surrender outcomes of such conscientious behaviors to Divine Source (or Tao) – to let go and go with the flow; because karmically whatever happens could not be otherwise. So, to clear our karma, we must non-judgmentally and forgivingly accept and bless everything and everyone NOW, as ephemeral and illusory appearances in ever impermanent space and time of our sole Divine Source – ineffable, immutable, and Eternal LOVE.

My insights revealed that our earthly sufferings arise from fearful and illusory ego-mind thoughts because we forget our true Divinity and immortality.
But that as omnipotent immortal spirit we have nothing to fear from anything that seems to happen in always illusory ego-mind space, time, and duality. Moreover, that our transcendence of ego-mind is inevitable, and always advanced by our loving behaviors.

These memoirs are published concurrent with commencement of the Jewish High Holy Days, and the Hindu Navaratri shraddha period. In prior times I participated in both Jewish and Hindu religious ritual observances of these important holidays.

But in recent years, I’ve stopped attending all scheduled religious ritual services. As an innately faith-based optimist, I now continuously honor God every day and everywhere with Divine intentions, behaviors, and prayers, and with the SillySutras spiritual poetry and philosophy website.

Yet, I’ve instinctively realized that beyond ego-mind’s persistent “optical illusion” of a space, time, and duality worldly “reality”, all that is, was, or will be is NOW. Thus, that being a worldly faith-based optimist (with hope for the future) is like aspiring to an “impossible dream” of a never-attainable mental mirage – a time-based dreamlike fantasy “reality” that can never exist.

Optimists instinctively hope for the best. But “hope” is always “then” while Life is only NOW, ever NOW, never then.

However, since inception of the current historically unprecedented post-pandemic “new normal” era, I’ve become optimistically convinced, and foresee, that a “critical mass” of energetically elevated humans will soon co-create (as a cooperative global family) an infinitely more compassionate world, without fearful ego-mind deprivations and sufferings.

And these faith-based equinox memoirs are deeply dedicated to inspiring and hastening our imminent fulfillment of that optimistic prediction.

I’ve become and irreversibly remain a faith-based optimist, despite apparent cataclysmic threats against survival of human life as we’ve known it.  And I equate my instinctive optimism with inner Faith in our sole Divine Source – ineffable, immutable, and Eternal LOVE.

Therefore I’m especially grateful to be able to now share these memoirs with you to help us realize and enjoy supreme fulfillment and happiness from ever optimistic faith in Divine LOVE, until we ascend and transcend all ego-mind perception-deception illusion.

“May we ever ascend –
as LOVE and Light,

To further encourage our heartfelt faith-based optimism, I’ve embedded below a YouTube video performance of the Rodgers and Hammerstein ‘cockeyed optimist’ song from “South Pacific”.

Please optimistically enjoy it as we energetically ascend as Love and Light,
beyond all suffering from ego-mind fright.