“There is an endless net of threads throughout the universe.
The horizontal threads are in space.  The vertical threads are in time.
At every crossing of the threads, there is an individual.
And every individual is a crystal bead.
And every crystal bead reflects not only the light  from every other crystal in the net,  but also every other reflection throughout the entire universe.”
~ Indra’s Net – from the Vedas of ancient India, 7000 years old 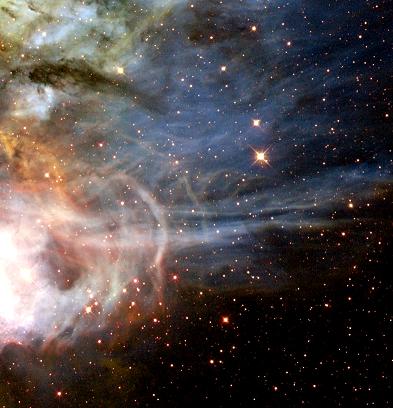 Ron’s Introduction to “Life Is A Light Show”

“Life Is A Light Show” is a visionary poem metaphorically revealing that Divine luminescence is the essence of all Cosmic energy forms and phenomena. Its composition was initially inspired when I was immensely blessed to behold the inner luminescence of “ten thousand suns” while crying to God atop a Yosemite mountain. Thereafter, I was blessed with further fleeting mystical experiences demonstrating that Divine luminescence is the essence of everyone and every thing.

This poem is dedicated to reminding us that our space/time “reality” isn’t really Real, but just a dream-like mirage; a thought-created illusionary world of inevitable karmic suffering; that we will awaken and escape such suffering upon Realization that space/time is merely a dream-like relative reality; that ultimate Reality is the Eternal Light of Universal Awareness – our true Essence and Source.

“The world, indeed, is like a dream
and the treasures of the world are an alluring mirage!”
“A wise man, recognizing that the world is but an illusion,
does not act as if it is real,
so he escapes the suffering.”
~ Buddha (The Awakened One)

This message is particularly important in these dark and turbulent times when countless humans are unknowingly and unnecessarily reifying space/time illusions with fearful worries, thoughts and emotions.

After the poem’s written and recited verses below, I will explain why fearful thoughts and emotions invariably harm us and deter our spiritual evolution to higher states of human consciousness. And why averting fearful and hateful negative thoughts and emotions is especially important now as humanity is about to experience a new Age of Aquarius, with shocking disclosures of previously hidden outrageous abuses, crimes and betrayals perpetrated against us by formerly trusted ‘elite’ rulers and “leaders’.

Is but a light show:

The Eternal light of Awareness
projecting and displaying itself to Itself
on the mirror of the mind.

A play of congealed Consciousness,

Ever flowing thought-forms
Imagining the universe.

Ever appearing and disappearing –
As above, so below.

Implicate – explicate – implicate –
Ever emerging from and melting into Mystery.

Eternal Awareness
Ever intending to Know Itself.

Is but a light show.

Ron’s audio recitation of “Life Is A Light Show”.

Ron’s Explanation of “Life Is A Light Show”.

We are about to experience a rare turning point in modern human history as Humanity awakens to an “enlightened” new Age of Aquarius, marked by the December 21, 2020 Winter Solstice.

In this new relatively enlightened era many spiritually awakening people worldwide are about to learn shocking truths concerning outrageously immoral abuses and crimes heretofore perpetrated against them by their previously trusted ‘elite’ rulers and “leaders’, but concealed and unknown until now.

Also, it will be widely revealed, at long last, that for millennia human Earthlings have unknowingly been demonically polarized, divided and energetically exploited by subhuman astral dark forces, which have psychologically ‘imprisoned” them in a digitally pre-programmed matrix – a virtual or simulated world.

Accordingly, many humans have been suffering from thoughts and emotions of helplessness, anxiety, aggression and hatred. Such negative thoughts and emotions invariably harm and weaken us, individually and collectively, and render us susceptible to psychological subjugation which impedes our spiritual evolution to higher states of human consciousness.

Aquarius has been traditionally associated with evolutionarily ‘enlightened’ energies. And in this new Aquarian age many people will be empowered to ascend from matrix psychological domination by emanating elevated heart levels of human consciousness which radiate loving serenity and calmness. Such ascension will enable worldwide societies to cooperatively thrive by actualizing Aquarian virtues of democracy, freedom, courage, honesty, idealism, rebellion, human welfare, and inner-directedness.

For ascension to elevated states of human consciousness, we must individually and collectively emanate heartfelt loving energies, without harmful thoughts and emotions of helplessness, anxiety, aggression or hatred which invariably weaken us and reify illusory darkness.

We can accelerate such ascension by always remembering that these dark and violent times are not really Real, and cannot threaten or harm our true Eternal Essence and common Reality, which is LOVE as the LIGHT of Universal Awareness.

So let us calmly, peacefully and harmoniously see insane current space/time events as a non-threatening and perpetually changing illusory play of Universal Awareness, like a projected “Light Show” or movie. And let us refrain from reifying relative ‘reality’ illusions.

May we thereby avert harmful reflexive reactions or judgments about what we see or learn, especially revelations of betrayal by those we’ve trusted.

Whatever happens in this ever impermanent illusory world of inevitable karmic suffering,
may we never forget our eternal immortality and spiritual oneness with Nature and all earth-life,
and may we ever emanate and widely radiate universal peace and happiness,
while realizing that this world is like a projected “light show” – “nothing but movies”.