“May the Lord give you peace.”
~ St. Francis of Assisi

“You are not a drop in the ocean.
You are the entire ocean in a drop.”
~ Rumi 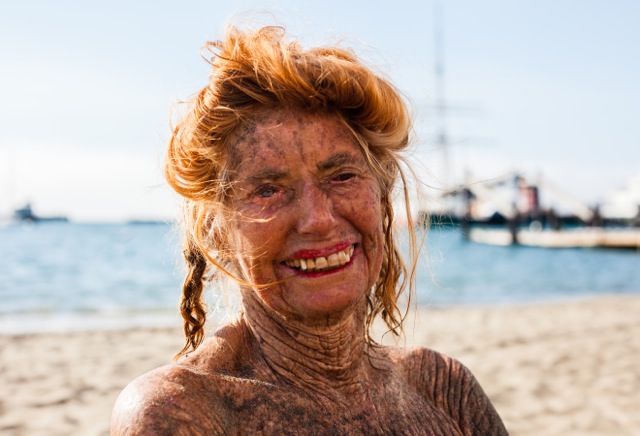 June 26, 2022 is the 89th birthday anniversary of my unforgettable departed friend Carol Schuldt. Carol was an extraordinarily intuitive free spirit, whose authentic and inner directed spiritual life was in inspiration for me and countless others.

Diagnosed with pancreatic cancer and heart failure,  Carol painlessly left her body at age 85 on December 1st, 2018.   A week later her body was interred in a wild nature place overlooking the Pacific Ocean, after spontaneous rituals and stories were shared by Carol’s friends on a beautiful sunny afternoon.

In tribute to Carol, this posting recounts my memoirs of our friendship, outlines Carol’s extraordinary spiritual history,  tells a miraculous synchronicity story about how I tearfully bid her farewell through our shared synchronistic harmony with St. Francis of Assisi, and concludes with my eulogy to Carol. 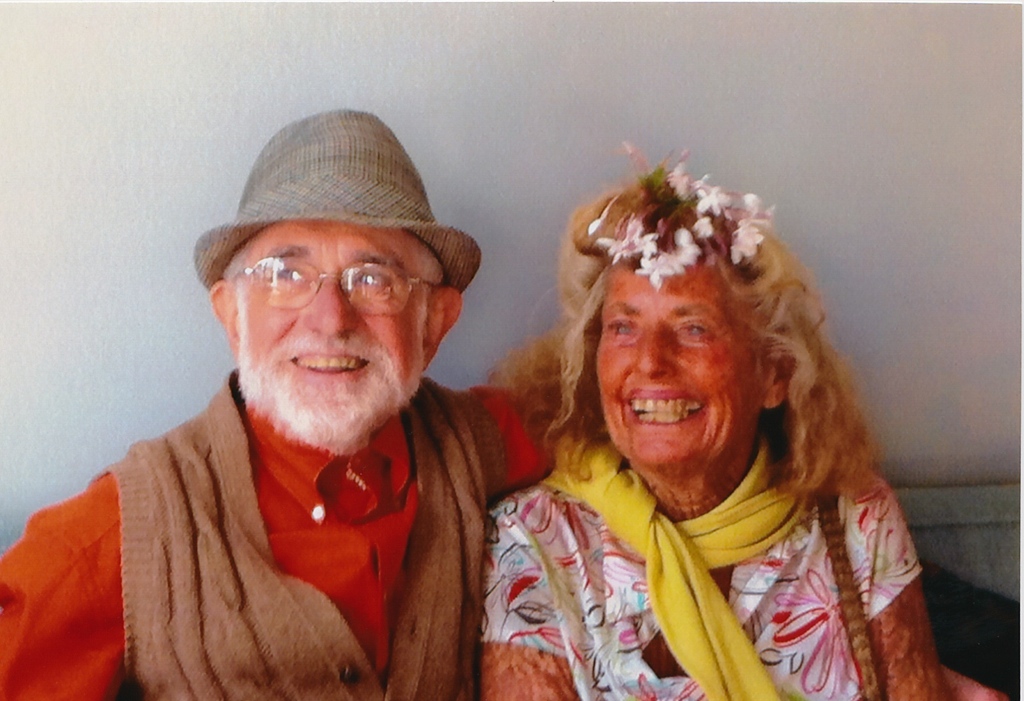 Carol was a a legendary San Franciscan, sometimes known as ‘Queen of the Beach’ or ‘Mother Teresa of the Sunset’. She lived as a life-long nature lover and natural born shaman, authentically, intuitively, generously and spontaneously. (See Carol’s SF Chronicle obituary)

Carol and I had innumerable synchronistic encounters, after we first met in the 1980’s. And we repeatedly shared our many ‘miraculous’ synchronicity stories (a few of which are posted here on SillySutras.com).

Before meeting Carol, I miraculously ‘discovered’ and became a lover of St. Francis of Assisi. And soon after meeting Carol, I regarded her as a ‘female St. Francis’ who constantly communed with Nature, even with the sun, the moon, and many nonhuman lifeforms.

So in tribute to Carol’s transition, I write now about her spiritual history, and how I tearfully bid her farewell through our shared synchronistic harmony with St. Francis of Assisi.

Carol and I first met long ago while sitting at Aquatic Beach on San Francisco Bay (across from Ghirardelli Square), where I walked and where she often came to escape ocean fog and swim in the sun (without a wet suit). Afterwards we exchanged many “miracle” stories about our lives stemming from our countless experiences of synchronicities, or meaningful ‘coincidences’.

I deeply appreciated Carol as an amazingly free spirit with great instinctive wisdom and generosity.  Before we met, she’d already become a ‘living legend’ throughout and beyond her San Francisco ocean front neighborhood. And many stories were written or told about her. For example, an excellent story: “A Benevolent Queen of the Beach” appeared in the San Francisco Chronicle on September 25, 2000. And in 2005 Carol was interviewed on film by the SF Public Library, about her history and life in the ‘hippie’ 1960’s.

The Chronicle article told of Carol’s exceptional inner wisdom even from childhood, when at Catholic school she adamantly refused to worship a bloody Christ on a crucifix, and was the only child exempted therefrom by the nuns, who recognized her wisdom.

The article also told how Carol had dedicated her life to helping troubled souls – especially young people. But that paradoxically Carol experienced great family tragedy with all of her three children: her two daughters whose lives were lastingly impacted by drug addiction, and her son Pete who was permanently brain damaged in a childhood car accident. Because of her great generosity, especially toward needy young people, Carol was sometimes known as the “Mother Teresa of the Sunset District”. And as a daily swimmer/surfer she also became known as ‘Queen of the Beach’.

Carol’s muraled house and aesthetic organic garden have symbolized her unique lifestyle as a ‘female St. Francis’. Especially noteworthy is an artistically beautiful St. Francis of Assisi “Peace & Joy” mural at her home’s entryway – a delightfully surprising tourist attraction for visitors to San Francisco’s ocean beach area. On Carol’s roof top (above the mural) is an artistic portrayal of ‘Brother sun’, her main deity, and unfurled above the roof is a red Tibetan prayer flag, symbolizing Carol’s respect for the Tibetan culture and Dalai Lama. 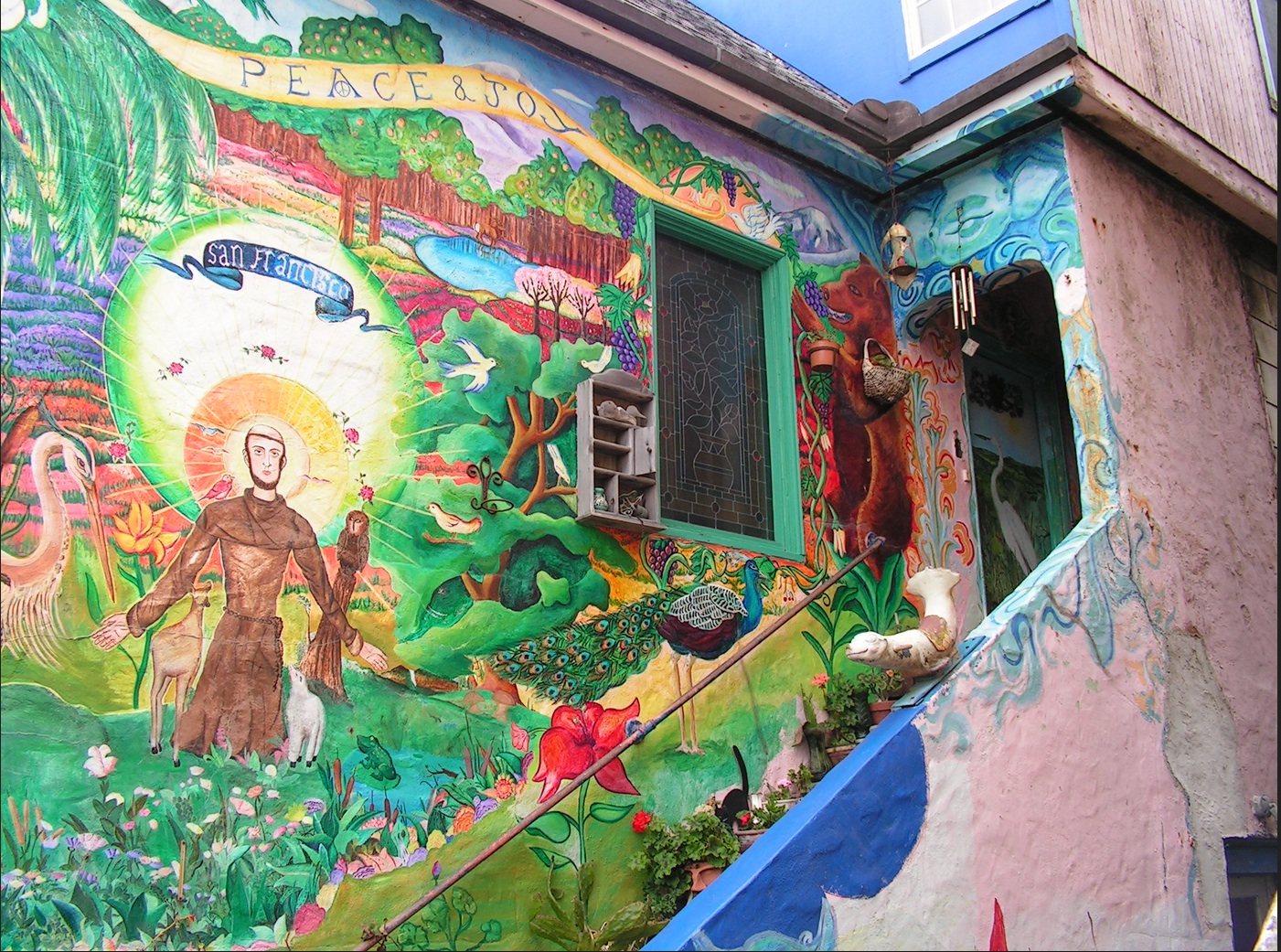 During forty years of living in the same San Francisco high-rise hermitage, my apartment has been adorned with many pictures and portrayals of St. Francis, my favorite saint, and of the peace prayer which he inspired. And until four years ago St. Francis in a stone statue also presided over my outside deck garden.

But in July 2018, I was obliged to remove everything from my outdoor deck so it could be renovated and repainted. Thereafter, I realized that I could no longer physically maintain my deck-top garden. So I decided to give away the plants and planters blessed by my St. Francis statue. While I was looking for new homes for my plants, the St. Francis statue was kept in an inconspicuous corner of my bedroom which was temporarily filled with many deck plants.

On December 1, 2018, my long-time neighbor and community gardener friend, Jan Monaghan, came to take pictures of my plants and planters, to help me find a new home for them. While showing Jan the St. Francis statue, I suddenly and inexplicably started crying, thinking and saying “goodbye Saint Francis”.  Thereafter for several hours I remained tearful.

The next day, Sunday December 2nd, I learned (via email) that Carol’s soul had departed her body Saturday evening, and I intuited that while Ron was tearfully saying goodbye to St. Francis Carol’s soul was astrally bidding Ron ‘adieu’.

On Monday morning, realizing that my St. Francis statue needed a proper and prominent new place to stand, I decided to move it to my my high-rise hermitage view living room, where I spend most indoor waking hours. So I telepathically told the saint in the statue that (on returning from a brief walk) I was moving him to a perfect place on my living room wool carpet, and that I would find an appropriate indoor pedestal for him there ASAP.

Soon thereafter, I took a brief walk on nearby Vallejo street. After walking for about fifteen minutes I beheld an amazing manifestation miracle. Amongst a curbside pile of discarded objects, I saw a perfect pedestal for St. Francis, which I carried home. On returning home, I moved St. Francis to a new perfect place on my living room carpet where he now resides on that miraculously manifested pedestal. And just as Carol’s St. Francis mural appears below a red Tibetan roof-top prayer flag, my St. Francis statue stands beneath a red Tibetan Kalachakra thangka mandala, symbolizing respect for the Tibetan culture, and His Holiness the Dalai Lama. 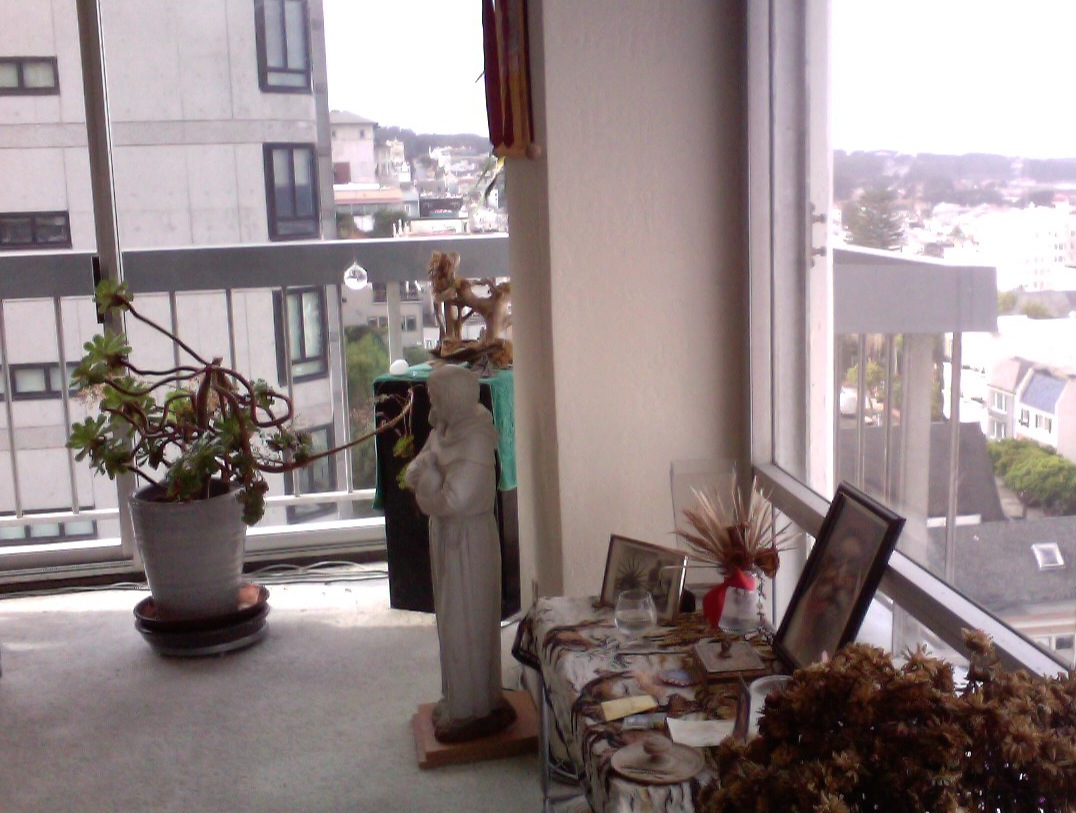 “Synchronicity is choreographed by a great,
pervasive intelligence that lies at the heart of nature,
and is manifest in each of us through what we call the soul.”
~ Deepak Chopra

After briefly blessing this world as a female St Francis,
the divine soul we’ve known as Carol Schuldt,
has returned to the Sun,
from where she’ll reappear eternally
for endless new lifetime adventures,
in endless new forms, of
LOVE. 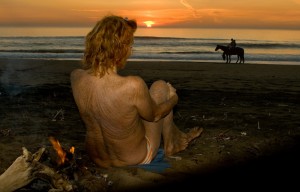