“Even avatars have to desire to be in God in every moment.
And when avatars die, they desire with all their being to be united with God. …..Look at Ramakrishna. How much he wept and prayed for the Divine Mother.”
~ Mother Meera to Andrew Harvey, “Hidden Journey”, Page 236

“’The visions that come from the Divine change you.
A real vision brings adoration of the Divine,
and in that adoration there can be no vanity. “
~ Mother Meera

“When you know that you are eternal,
you can play your true role in time.
When you know you are divine
you can become completely human.”
~ Mother Meera 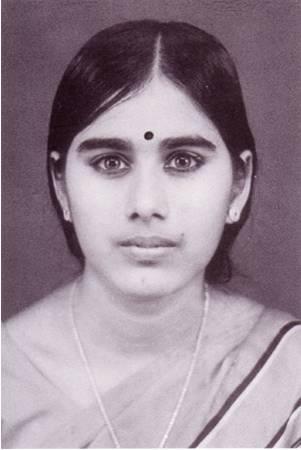 After Guruji returned to India in 1980, I remained open to learning from other spiritual teachers. From my experience with Guruji, I had learned that ‘sitting at the feet of a master’ can be quite auspicious. Thus though Guruji encouraged initiates to follow only his Kundalini Maha Yoga path, he didn’t discourage us from seeing other teachers. Once he told my friend Joy Massa, “I’ve learned from many teachers, why shouldn’t you.” So after meeting Guruji I met and learned from many other teachers.

Beginning in 1987, I was especially attracted to the devotional path of Amritanandamayi (Ammachi) of calling and crying to the Divine, and for seven years I attended many of her US darshans and regular programs at her San Ramon ashram. (See https://sillysutras.com/other-teachers-mata-amritanandamayi-ammachi-rons-memoirs/) But while drawn to Ammachi’s devotional path, I continued meeting other spiritual teachers. One of the most memorable was Mother Meera.

In 1991 I listened on New Dimensions radio to Andrew Harvey, masterfully interviewed about his spiritual teacher, Mother Meera, by my friend Michael Toms. I learned that Mother Meera was a young Indian woman who Harvey convincingly portrayed as an alleged avatar of Divine Mother channeling Divine Light (Paramatman). So I became quite curious about Mother Meera, and read “Hidden Journey, A Spiritual Awakening”, Harvey’s book eloquently describing her. Also, at that time a trusted spiritual friend told me of his very profound inner experiences with Mother Meera, which enhanced my interest in her.

Then, in January, 1992, just after my retirement as a San Francisco litigation attorney, I journeyed to India to pay respects to my then one hundred fourteen year old beloved Guruji, Shri Dhyanyogi Madhusudandas, and thereafter to visit my daughter Jessica who – then known as “Yogini” – was living an ascetic life on Ammachi’s ashram in Kerala.

Later in 1992, on returning from India, I decided to journey to Italy to honor Saint Francis of Assisi, with whom I long felt deep inner rapport. On learning that Mother Meera had moved from India to Germany where she gave darshans at a small town near Frankfort, I decided to fly to Europe via Frankfort, and scheduled several days in Germany before flying to Italy.

So, in July, 1992, I traveled to Thalheim, Germany, where I had three powerful evening darshans with Mother Meera unlike any others I had experienced.  In an atmosphere of total silence she blessed each devotee, one by one, with a seemingly unchanging expression. As each devotee would kneel before her in complete silence, she gently held their head in her hands for a few moments. Then, as instructed, each devotee sat up as she gazed into their eyes. We were told that during this ritual Mother Meera was clearing blocks and sharing divine light.

On the first of three nights, while awaiting my turn to approach Mother Meera, I started spontaneously crying and swaying. Whereupon her companion Adilakshmi asked me to be still.  (Apparently, she didn’t want me to disturb the silent meditators.)  As I awaited my darshan turn, it felt to me as if a gigantic Divine Presence was channelling light through an earthly female form, wherein no one  was  ‘at home’.  I didn’t perceive any heavenly light shows, but I did experience a tremendous and almost palpable yet extraordinarily subtle energy unlike any other I could remember.  So much energy was being radiated from her eyes that at times I distinctly felt her eyelids move, even when I was seated at the back of the darshan room filled with up to 200 other people.

Especially on the third night, on gazing into Mother Meera’s eyes, I felt as if I had received an immense blessing, but I have no words to describe it.  Friends in the audience reported that the energy in the entire room seemed to change while she blessed me that night.

Outwardly Mother Meera’s darshans were very different from Ammachi’s darshans.  There was not a single word or sound or smile that I perceived from her during the entire visit. Unlike Ammachi, Mother Meera didn’t overtly seem to encourage devotees to fall in love with her form.  Everyone – including Andrew Harvey, who was there that weekend – seemed to get the same impersonal expression and the same darshan time.

Although I was extremely grateful for the blessing of my darshans with Mother Meera, I did not feel devotionally drawn to her as had happened with Ammachi.

I planned my 1992 pilgrimage to Assisi to coincide with Ammachi’s world tour appearance there. So after seeing Mother Meera in Germany I traveled to Assisi where – as well as communing with beloved Saint Francis – I attended two Ammachi darshans. (See https://sillysutras.com/pilgrimage-to-assisi-communing-with-saint-francis-rons-memoirs/) Also, I was able to briefly see my daughter Jessica who was traveling in Ammachi’s entourage.

In contrast to the silent Mother Meera satsangs attended by no more than two hundred people, there were up to fifteen hundred people attending Ammachi’s Assisi programs, with a carnival-like atmosphere that troubled me, and I was told there were even bigger crowds in France. Also, I learned to my distress that in preparing the large Assisi spiritual venue for Ammachi some of her devotees had covered up pictures of other spiritual teachers which were on permanent display there.

Nonetheless, I had blissful experiences during the Ammachi darshans, where spontaneously I sang, and swayed, and cried to the Divine. During those darshans Jessica/“Yogini” was seated next to Ammachi – happily handing her flowers. Afterwards Jessica reported to me that one day Ammachi had pointed at me singing, swaying and crying, saying: “Ananda!”

Despite my mounting concerns about a growing atmosphere around Ammachi of adulation of the incarnate rather than adoration of the Infinite, I still felt much more resonant with Ammachi’s devotional path than with the austere silence of Mother Meera’s darshans. So – though gratefully I honored and respected Mother Meera – I never again attended her darshans, but continued seeing Ammachi.

*Ultimately, in 1995-6, I learned that Ammachi was competitive with Mother Meera and other teachers in a manner which was contrary to teachings of Guruji, Ramakrishna, and other teachers I respected. The “last straw” incident which sparked my realization of Ammachi’s competitiveness traumatically ended my faith in her as a teacher. It involved another acclaimed Indian Divine Mother avatar, Shri Amma Karunamayi and is confirmed in the recently published memoir of Gail Tredwell (aka “Gayatri” or “Swamini Amritaprana”), who for twenty years was Ammachi’s revered first and closest Western female devotee. (See “Holy Hell, A Memoir of Faith, Devotion and Pure Madness”, pp. 264-6 )