“Cosmic consciousness is
infinite evolutionary impetus in each of us.”
~ Ron Rattner, Sutra Sayings

“As we experience our universality,
we transform our reality.”
~ Ron Rattner, Sutra Sayings 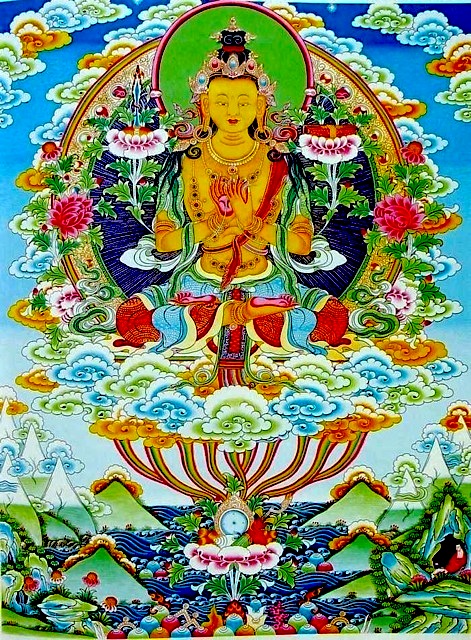 My miraculous “sight seeing” trip with Dhyanyogi, and subsequent experiences, inspired ever increasing faith in his saintly good will and yogic powers. But questions arose for me about his Hindu path.

In writings introducing his path to Americans, Guruji said that Kundalini Maha Yoga was not a religion but a spiritual practice bringing “lasting inner peace and happiness to individuals of any belief or religious affiliation.”   But his prescribed spiritual practices mostly included Sanskrit prayers and mantras associated with Hinduism, in addition to daily meditations.

At first I was uncomfortable reciting Sanskrit prayers and mantras which I didn’t understand, except for the Ram mantra with which I have always felt deep affinity. But intuitively I relied on Guruji’s extraordinary being and benevolence, and on his assurances that initiates would enjoy “a happy life”. So gradually I became more and more engaged in these practices, trusting that they would help me live a happy life.

Then, during a public meditation program, Guruji said these sanskrit practices would lead us to “the spiritual goal”. And I wondered: “what spiritual goal?” Amazingly, though I was still then an ‘uptight’ skeptical lawyer, I had taken an initiation from an unknown Hindu guru and was repeating his esoteric Sanskrit prayers and mantras not knowing what they meant or that their purpose was to achieve some “spiritual goal”.

So, after the meditation program, I asked others about this “spiritual goal”. I was told that the object of Hindu practices was to achieve “mukti” or “moksha” or “self-realization”; that the kundalini purification process, viz. the “evolutionary process taking place in [my] nervous system”, would some day in some lifetime lead to a state of Divine illumination where the Self, soul, or “Atman” would experience its Oneness with “Brahman” [Supreme Reality] – the pinnacle of human experience. Only then did I begin considering these ideas of “self realization”.

Though Guruji’s assurance of our finding lasting peace and happiness was appealing, I hadn’t consciously been drawn to him by this assurance but by a deep intuitive heartfelt connection. Before meeting Guruji I was not ‘goal oriented’. Instinctively hesitant to pursue materialistic societal goals, I was mostly inner – not outer – directed. But never before had I considered any inner ‘goals’.

In the late 1950’s I had been deeply influenced on reading “The Sane Society” by then prominent psychotherapist Erich Fromm, about the pathology of ‘normalcy’ in our materialistic society. Fromm suggested that Western society as a whole was lacking in sanity; that the inequities and disharmonies of the entire society were pathological, not just the mental illnesses of people therein. Fromm’s essay had confirmed and enhanced my instinctive reluctance to selfishly follow materialistic societal goals.

So, in becoming a lawyer and throughout my professional career, my main motivation was to help others; it was not to become rich or famous. Long before my spiritual awakening, I had a deep inner instinct to pursue social justice causes, with considerable sensitivity to the “insanity and iniquity of inequity in our society”.

But, with the Yosemite inner experience of “ten thousand suns” I realized that beyond my instinct for social justice was an extraordinarily intense longing for the Divine – to return from this crazy world back to God, back to Ram. However, not until hearing Dhyanyogi’s teachings about a spiritual “goal”, did I consider pro-actively seeking such an inner goal.

Though initially it seemed desirable to aspire to “self realization” or “enlightenment”, I was unable to relate experientially to those illumined states as ascribed to rare beings like Gautama Buddha. So, I was never clear about what to “seek” until, ultimately, I stopped seeking it, whatever it was.

After considerable reflection, I abandoned goal oriented spiritual seeking, and intuitively began with more and more heartfelt faith to surrender to the Infinite – “to let go, and go with the flow” – and to “leave it to the Lone Arranger.” * Perhaps, I transcended transcendence aspirations.

Inspired by the Buddhist Bodhisattva ideal of altruistically helping all beings end their sufferings, I stopped trying to be beyond this world, but rather to be in it in a way which might help all life everywhere. And I ceased regarding “enlightenment” as a “goal” but rather as an endless evolutionary process.

Experientially, I had realized that ‘the Kingdom of Heaven’, Buddha nature, and Love, were the Essence of everything in our phenomenal “reality”. And my core spiritual motivation became and remains:

“Infuse us, enthuse us, and use us, to bless all Life as LOVE.”

But paradoxically I have learned from experience that we cannot change others, only ourselves; that by furthering our own evolution we help elevate humanity’s common consciousness and thereby subtly help others. So, I consider it my responsibility to aspire to be the change I wish to see in the world, with the intention and dedication of so helping everyone everywhere.

And in this process, as Guruji promised, with unspeakable gratitude I am now enjoying “a happy life” beyond anything that I could have imagined when I received a shaktipat initiation in 1978.