“Death is truly part of life … ‘what we called death is merely a concept’.”
“This happens at the gross level of the mind.
But neither death nor birth exist at the subtle level of consciousness that we call ‘clear light.’”
~ Dalai Lama

At my death do not lament our separation
… as the sun and moon but seem to set,
in reality this is a rebirth.
~ Rumi

“Birth and death are virtual,
but Life is perpetual.”
~ Ron Rattner, Sutra Sayings 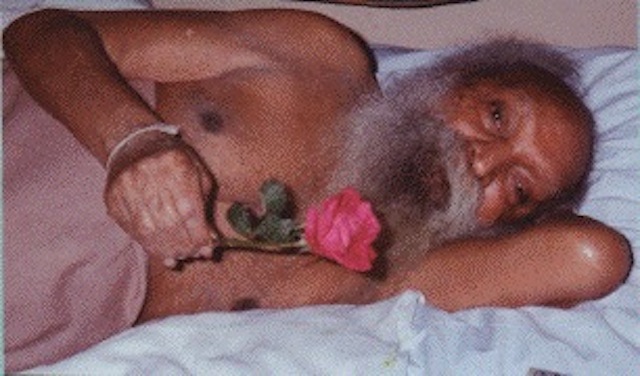 On observing noteworthy phenomena which we can’t yet explain by known natural or scientific laws, we sometimes call them “miracles” and may attribute them to a Divine power.

Like other rare saints and mystics my beloved “Guruji”, Shri Dhyanyogi Madhusudandas, occasionally demonstrated  “miracles”  to foster faith in the Divine.  In writings and lectures, Guruji explained that yogic powers (siddhis) might be attained via control of life-force energies, but that they were seldom displayed; that such powers are only used

“sparingly and on occasion for humanitarian and other discretionary ends”,
but not “for self-aggrandizement.”

In prior memoirs, I’ve explained how Guruji has helped me from subtle planes, like a ‘guardian angel’, since before I met him when his body was approximately one hundred years old, and even after his supposed bodily death in India sixteen years later.

I believe that Guruji left his body consciously and intentionally, using his yogic powers; that Guruj’s subtle bodies survived the physical body; and, that from subtle planes he continues to help humanity.

I’d like to explain to you my reasons for this belief.

In the Hindu tradition, when a yogi who has previously experienced the highest state of samadhi intentionally leaves his body, this is not the same as death of an ordinary person who has not attained Self-realization. Such a passing is called a Mahasamādhi (great and final samādhi) and is the act of consciously and intentionally leaving one’s gross body at the time of physical death.

Before I received shaktipat initiation from Guruji in 1978, I had already witnessed his yogic power to influence this relative reality from subtle planes. He had clearly appeared in my subtle inner vision when we were physically distant. Thereafter, I had other memorable experiences of Guruji’s subtle powers, which are shared in other memoirs chapters.

In 1980, just before Guruji returned to India from four years in the USA, he stayed in my apartment. At that time Guruji’s American attendant, Lackshman, recounted to me his brief conversation with Guruji following a sparsely attended public meditation program. Driving home, Lackshman had remarked to Guruji that it was too bad so few people had attended that event. Whereupon Guruji replied,

“It’s not important. Most of my work is on other planes.”

And, once when we were alone in his room in my apartment, Guruji told me that he came and went from his physical body as he pleased. (See Human Body – A Precious “Prison”? )

Also, at Guruji’s meditation programs, I heard amazing stories from others who had experienced his extraordinary yogic powers. Perhaps the most memorable of these stories was that of Rudy, a Chicago school teacher who decided to travel on his motorcycle to be with Guruji in California. But before reaching California, and while he was in Colorado, Rudy had an unexpected and “miraculous meeting” with Guruji.

On a curvy mountain highway in Colorado, Rudy’s motorcycle skidded off the road and careened three hundred feet down a steep incline. Just before hitting bottom, Rudy called out Guruji’s name, remembering Guruji’s assurance that “I’m always with you.”

Gravely injured, Rudy became comatose. While comatose he had a miraculous “near death experience” (NDE), which he survived and later recounted in detail.

On ‘the other side’ during the NDE, Rudy was greeted and guided by Shri Dhyanyogi, to save his life. Thereafter, at a California retreat, Guruji explained to Rudy that he had saved his life because Rudy still had much more work to do in this world.

Rudy’s vividly credible description of this amazing incident was convincing testimony of Guruji’s yogic power to influence what happens in this relative “reality”, and to manifest at will on subtle planes of “reality”.

Besides my own extraordinary experiences with Guruji, and hearing of Rudy’s experience, I learned of numerous other “miraculous” experiences of Guruji’s devotees.
(See “This House is on Fire, The Life of Shri Dyanyogi”, as told by Shri Anandi Ma.)

My Experience in San Francisco on Guruji’s Mahasamadhi in India.

One of my most memorable mystical experiences of Guruji’s yogic powers happened just after he left his physical body in India and I was at home in San Francisco. In late August, 1994, I was home asleep when I was suddenly awakened in the middle of the night.

With eyes open, I beheld in amazement an extraordinary and unprecedented vision – an otherworldly, multi-colored bird, translucent with a peacock-like tail and human-like eyes. Nothing about the bird appeared like any ‘real-life’ bird I had ever before seen, or might have imagined.

As I gazed in awe at this ethereal apparition, I was enveloped and transformed by a supernal aura of supreme Peace, which emanated from the bird’s radiant dark eyes. I awakened in the morning puzzled, and wondered about that extraordinary apparition which had enveloped me with ‘peace that passeth understanding.’

The next day, still wondering about the vision, I was sitting at my dining room table when an ‘inner voice’ dictated to me a poem concerning death, a subject I hadn’t then been thinking about.

Listening to my muse, I quickly and spontaneously “channeled” this poem about death, which I later titled Dream Life:

When we come to Earth
They call it a birth
When we leave,
They say we die.

To awaken as Bliss
From all of this,
Joyous that all is
“I”.

Thereafter, within a day or two, I received a rare call from one of Guruji’s early US disciples, Elyse (Indu) of Sacramento. She informed me of Guruji’s death – his Mahasamādhi – on August 29. Only then did I realize that I had received this poem (about life and death as a waking dream) as a ‘parting’ profound message and treasured gift from Guruji.

So I recited the poem for Elyse. Then I told her about my puzzling otherworldly bird vision. She promptly and aptly interpreted that vision as a mythical Phoenix bird, symbol of immortality, resurrection, and life after death.

Whereupon, I realized that the bird’s dark human-like eyes emanating ineffable supernal Peace were Guruji’s eyes; and, that this unforgettable vision and experience of celestial peace was another parting gift and message from Guruji, for which I am eternally grateful. 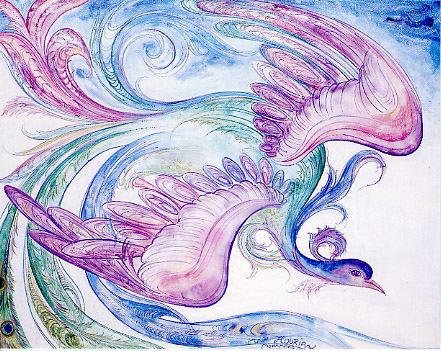 Twenty seven years have passed since that miraculous experience of Guruji’s Mahasamādhi, but I still continue to feel his subtle presence and often shed tears of devotion and joy, when I think of him or gaze at his photographic image. And other devotees entering my high-rise hermitage have also experienced his life-force energy (shakti).

Almost twenty years after Guruji’s transition, I had a home visit from my friend Michael O’Rourke, a talented spiritual cinematographer who helped me launch SillySutras.com. I was telling Michael about Guruji, and feeling his subtle presence, while seated in a reclining chair. After a while I had to excuse myself for a bathroom visit. When I returned several minutes later Michael reported to me his extraordinary experience of Guruji’s subtle appearance.

While Michael was gazing at me as I talked about Guruji, he went into an altered state of consciousness. Michael then perceived another face morphing into mine – a face without glasses and with a longer white beard. It was Guruji!

Michael said that amazingly after I got up to go to the bathroom he still perceived the image of Guruji seated in the chair, until after I returned and sat down again.

“All those who came to me for Shaktipat …. are my spiritual heirs. For my energy works through them.”

Not only were Michael and others blessed by Guruji’s extraordinary energy in my apartment, I believe that (like he blessed Rudy) Guruji saved my life while I was comatose and near death after a taxicab rundown in June, 2014. (See https://sillysutras.com/another-near-death-experience-rons-memoirs/) So that it is only through Guruji’s grace that I have miraculously survived to gratefully still share these memoirs.

May those reading these stories also receive Guruji’s blessings. In sharing them, I especially wish that they help inspire younger people to whom we bequeath our future, as they inherit the mistakes and learning experiences of their forebears in an extraordinary and unprecedented “new normal” world.