“Your own will is all that answers prayer,
only it appears under the guise
of different religious conceptions to each mind.
We may call it Buddha, Jesus, Krishna, but it is only the Self, the ‘I’.”
~ Swami Vivekananda [Jnana Yoga]

“But if there is ever to be a universal religion, it must be one which will hold no location in place or time; which will be infinite, like the God it will preach; whose Sun shines upon the followers of Krishna or Christ, saints or sinners, alike; which will not be the Brahman or Buddhist, Christian or Mohammedan, but the sum total of all these, and still have infinite space for development; which in its Catholicity will embrace in its infinite arms and find a place for every human being … It will be a religion which will have no place for persecution or intolerance in its polity, which will recognize a divinity in every man or woman, and whose whole scope, whose whole force, will be centered in aiding humanity to realize its divine nature.”
~ Swami Vivekananda 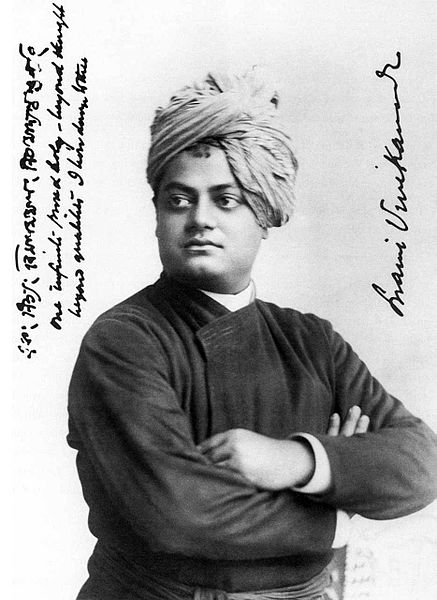 “One infinite pure and holy –
beyond thought beyond qualities
I bow down to thee”.

As principle disciple of Holy Man Sri Ramakrishna Paramahansa, Swami Vivekananda first brought universal Indian wisdom to large Western audiences beginning as Indian delegate to the historic 1893 Chicago Parliament of World Religions, where his opening remarks famously addressed his “Sisters and Brothers of America”, and concluded with this prayerful invocation:

“I fervently hope that the bell that tolled this morning in honour of this convention may be the death-knell of all fanaticism, of all persecutions with the sword or with the pen, and of all uncharitable feelings between persons wending their way to the same goal.”

[Reenacted excerpts from his Parliament speeches are linked below.]

Thereupon and thereafter Swami Vivekananda eloquently explained to Westerners ancient perennial principles of Hinduism, and why according to Advaita Vedanta philosophy this impermanent and ever changing world of space, time and causality is illusory; that “In the Absolute there is neither time, space nor causation.”

Though Vedic rishis or seers had anticipated Einstein’s 1905 theory of relativity by millennia, their teachings were largely unknown in the West until first explained by Vivekananda soon before Einstein revolutionized Western science.

Swami Vivekananda experientially had realized as impermanent and illusory the appearance of our space, time, causality reality. From his rare level of nondualist consciousness he shared many wise perennial teachings to guide our lives on Earth, including the “Fifteen Laws of Life”, which follow.

Written over a hundred years ago, these wisdom teachings remain relevant worldwide in current critical times.

May they deeply inspire and guide us to help heal the World by realizing and experiencing their fundamental truths.

1. Love Is The Law Of Life: All love is expansion, all selfishness is contraction. Love is therefore the only law of life. He who loves lives, he who is selfish is dying. Therefore, love for love’s sake, because it is law of life, just as you breathe to live.

3. Life is Beautiful: First, believe in this world – that there is meaning behind everything. Everything in the world is good, is holy and beautiful. If you see something evil, think that you do not understand it in the right light. Throw the burden on yourselves!

4. It’s The Way You Feel: Feel like Christ and you will be a Christ; feel like Buddha and you will be a Buddha. It is feeling that is the life, the strength, the vitality, without which no amount of intellectual activity can reach God.

5. Set Yourself Free: The moment I have realised God sitting in the temple of every human body, the moment I stand in reverence before every human being and see God in him – that moment I am free from bondage, everything that binds vanishes, and I am free.

6. Don’t Play The Blame Game: Condemn none: if you can stretch out a helping hand, do so. If you cannot, fold your hands, bless your brothers, and let them go their own way.

7. Help Others: If money helps a man to do good to others, it is of some value; but if not, it is simply a mass of evil, and the sooner it is got rid of, the better.

8. Uphold Your Ideals: Our duty is to encourage every one in his struggle to live up to his own highest idea, and strive at the same time to make the ideal as near as possible to the Truth.

9. Listen To Your Soul: You have to grow from the inside out. None can teach you, none can make you spiritual. There is no other teacher but your own soul.

10. Be Yourself: The greatest religion is to be true to your own nature. Have faith in yourselves!

11. Nothing Is Impossible: Never think there is anything impossible for the soul. It is the greatest heresy to think so. If there is sin, this is the only sin – to say that you are weak, or others are weak.

12. You Have The Power: All the powers in the universe are already ours. It is we who have put our hands before our eyes and cry that it is dark.

13. Learn Everyday: The goal of mankind is knowledge… now this knowledge is inherent in man. No knowledge comes from outside: it is all inside. What we say a man ‘knows’, should, in strict psychological language, be what he ‘discovers’ or ‘unveils’; what man ‘learns’ is really what he discovers by taking the cover off his own soul, which is a mine of infinite knowledge.

15. Think Different: All differences in this world are of degree, and not of kind, because oneness is the secret of everything.

This posting honors both Swami Vivekananda and his renowned Spiritual Master, Sri Ramakrishna Paramahansa, whose lives and teachings have been extraordinarily inspirational for countess beings, including me. Additionally it honors my beloved Guruji, Shri Dhyanyogi Madhusudandas, who was also inspired by Vivekananda.

Vivekananda considered Shri Ramakrishna as “higher and nobler than all ordinary” teachers, and attributed all his powers to Ramakrishna, saying:

“All that I am . . is owing to my Master, Shri Ramakrishna, who incarnated and experienced and taught this wonderful unity which underlies everything, having discovered it alike in Hinduism, in Islam, and in Christianity.” [His] “One touch, one glance, can change a whole life.”

Synchronistically, my Guruji Shri Dhyanyogi – who was another one of those rare great beings whose “One touch, one glance, can change a whole life.” – was crucially inspired and helped by Vivekananda.

The fascinating story of how this happened is told in “This House is on Fire, The Life of Shri Dyanyogi”, pp  61-64, by Shri Anandi Ma.

After fifteen years of solitary wandering in rural India Guruji had a dramatically transformative vision of Vivekanda, who assured Guruji that he would reach his spiritual goal.

Soon thereafter Guruji discovered and was enthralled by Vivekananda’s teachings published in the book Raja Yoga, which included his apt lectures in the West, and commentaries explaining Patanjali’s Yoga Sutras, widely accepted as a foundational Sanskrit text of  Raja Yoga philosophy.

Guruji continuously read and re-read Vivekandanda’s Raja Yoga book, like a scripture, and ultimately he repeatedly recommended it to his disciples, including me.