“We are beings of light –
Eternal and bright,
and so shall ever be.”
~ Ron Rattner, Sutra Sayings

It’s not our longitude
Or our latitude,
But the elevation of our attitude,
That brings beatitude.
~ Ron Rattner, Sutra Sayings 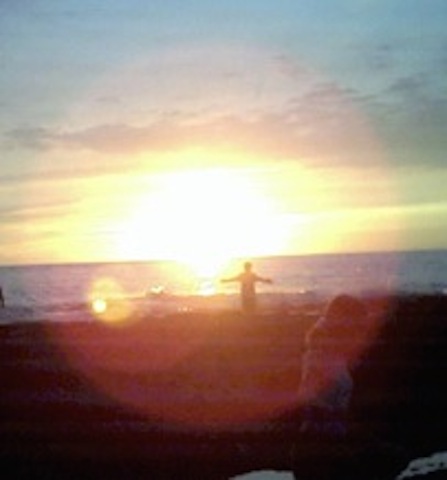 Beholding Divinity in a Crowded Courtroom

After my midlife spiritual awakening, I gradually realized that the common Essence of everything in our phenomenal “reality” is the inner Eternal Light of pure Awareness.

Today’s memoirs story significantly contributed to that realization. It tells of a ‘miraculous’ mystical vision in a crowded San Francisco courtroom which revealed that everyone and everything everywhere is Divine, and that experiencing God depends on our state of mind, rather than our physical environment.

I’m again sharing this story because its mystical revelation (from over forty years ago) is especially important in current “new normal” times, as our world is increasingly troubled, turbulent and politically polarized, with countless people fearfully experiencing poverty, hunger, sickness, and deprivation of basic human rights, while justifiably concerned that a nuclear holocaust or catastrophic climate collapse might soon end life on Earth as we have known it.

So this story is intended to help us live with inner peace and happiness, in an age of extreme mental malaise unprecedented in modern recorded human history.

For two years prior to the revelatory courtroom vision, I’d become profoundly motivated by post-divorce lifestyle changes and spiritual awakening experiences to change my life’s focus from litigation to meditation. But I felt moral and legal obligations to support and nurture my two young children, from whom I had been traumatically separated.

So I was feeling frustration about apparent conflict between an intense desire to retreat to an ashram or other quiet environment, and need to fulfill my worldly obligations.

Whereupon I was synchronistically blessed with an amazing experience, from which I learned that perception of God depends on our state of mind rather than our physical environment.  It vividly revealed that I didn’t need to retreat to an ashram, mountain top, cave, or forest – like yogis of bygone eras – but could experience divinely luminous and numinous inner states even while continuing my worldly life as an urban litigation lawyer.

It happened in a crowded San Francisco courtroom filled with lawyers, soon after my 1978 shaktipat initiation by my Guruji, who was still then in the Bay Area. By that time, especially after meeting Guruji, I was experiencing an intense longing to return to God, and had been praying fervently for a way to exchange my life of litigation for a life of meditation. But (as a divorced parent) I needed the income from lawyering to help support my young children and a separate dwelling.

Synchronistically, I was then shown that Divinity is immanent in everyone everywhere – even in crafty lawyers in crowded courtrooms; that experiencing nearness to God depends on our state of mind, rather than our physical environment.

This unforgettable revelatory experience happened one morning in the San Francisco Superior Court, Law And Motion department, where all pending civil pre-trial motions were then argued and decided. All lawyers were then required to check-in and be seated by 9 am, though dockets were usually quite long and hearings on scheduled motions took up most of the morning.

That day my motion was docketed toward the end of the calendar, assuring a long wait before it was called. I arrived at 9 am, at the last minute, when the courtroom was already filled with seated lawyers awaiting their turns to present legal arguments. I could see only one remaining vacant seat which synchronistically was next to my adversary, who was seated beside the center isle. He was a very amiable, skilled and prominent lawyer, but we did not then have a friendly rapport.

With ‘righteous indignation’, I had become convinced that he was knowingly representing a dishonest client with an obviously contrived and unjust cause. Moreover, I judgmentally considered his pre-trial tactics in our case to have been ethically questionable.

Reluctantly, I seated myself next to him with my motion papers in a small brief case on my lap. Because of the inevitable long wait before our late calendared motion would be called, I decided to close my eyes and meditate. Whereupon, I inadvertently went into a very deep state of meditation.

When the case was finally called for argument, I could barely hear the bailiff’s distant pronouncement: “Number 34, R______ versus D_____.”

I opened my eyes, but for the first time in my life I was totally sightless (when not asleep), and unable to perceive anyone or anything in that courtroom. Instead of seeing the people and objects in the courtroom, I beheld only an amazingly luminescent and radiant effulgence – like a golden mist or miasma. [*See Aurobindo footnote] However, I could sense my adversary getting up and walking up the aisle to the front of the courtroom.

Sightless, I stood and followed him up the aisle. As I was walking without normal vision, the miraculous gold effulgence began to clarify. Instead of just a golden mist, I began seeing everything and everyone in the courtroom – including my mistrusted adversary – as silhouetted lines of gold light. It was as if a Cosmic artist was sketching in golden outline the shape of every person and every object.

I reached the counsel table, perceiving my adversary (and everything else) only as lines of golden light. And, with considerable concern, I wondered how I could present an important case without being able to view my carefully prepared notes and citations.

Then, just as my adversary and I were asked by the Judge to identify ourselves and the parties for whom we were appearing, my normal eyesight was suddenly restored. It was as if a Divine ‘trickster’ had temporarily blinded me to bestow an enormous insight, and then had waited until the last possible moment before restoring my usual eyesight.

Soon afterwards, I recounted my courtroom experience to my friend Kusuma, one of Guruji’s translators, who then asked him about it. Guruji told Kusuma that, with elevated awareness, I had perceived everyone and everything in the courtroom from a subtle causal dimension.

Ever since, I have recalled that marvelous experience as an immense blessing which not only revealed and reconfirmed to me that the essence of everyone and everything is the eternal light of Cosmic Consciousness, but which vividly demonstrated that to commune with Divinity I didn’t have to retreat to an ashram, mountain top, cave, or forest – like yogis of bygone eras – but could experience eternal luminosity and numinosity even while continuing my worldly life as a litigation lawyer in a vast urban area; that experiencing God is dependent on our state of mind, rather than our physical environment.


[*Footnote] Sri Aurobindo and Aurobindo’s Mother have written descriptions of the light of Supramental Consciousness as appearing to them like “a warm gold dust” “a multitude of tiny golden points”. These are the only descriptions which I have as yet been able to find in mystical literature and poetry comparable to my marvelous courtroom vision.

The realization that everyone and everything everywhere is Divine and Holy, and that experiencing God is dependent on our state of mind, rather than our physical environment, has transformed my life for over forty years.

It was soon put to its first severe test when the foregoing lawsuit was scheduled for trial at the very same time Guruji was giving a retreat at the ‘paradise’ island of Maui, Hawaii. I intensely wanted to attend that retreat, but instead was obliged to conduct a six week jury trial in San Francisco.

So, rather than being with Guruji in an Hawaiian ‘paradise’ [*See photo below.], I spent a month and a half in a San Francisco courtroom with my crafty opponent, who appeared with two assistants – a young lawyer and a paralegal – to eloquently and skillfully present his client’s ethically questionable case.

I didn’t again perceive my adversary as Divine light. But, constantly remembering pervasive Divinity, I silently recited my Ram mantra whenever he addressed the judge or jury. It was a civil case, so only nine of the twelve jurors’ votes were needed to prevail. But ultimately all twelve jurors voted my client a large cash judgment. So civil justice prevailed in our omnipresent Divine ‘reality’.

*Below is a photo of Guruji taken by my friend Ram Dassi in front of the giant Buddha statue at the Lahaina, Maui Buddhist temple, while I was remembering Rama in a San Francisco courtroom. 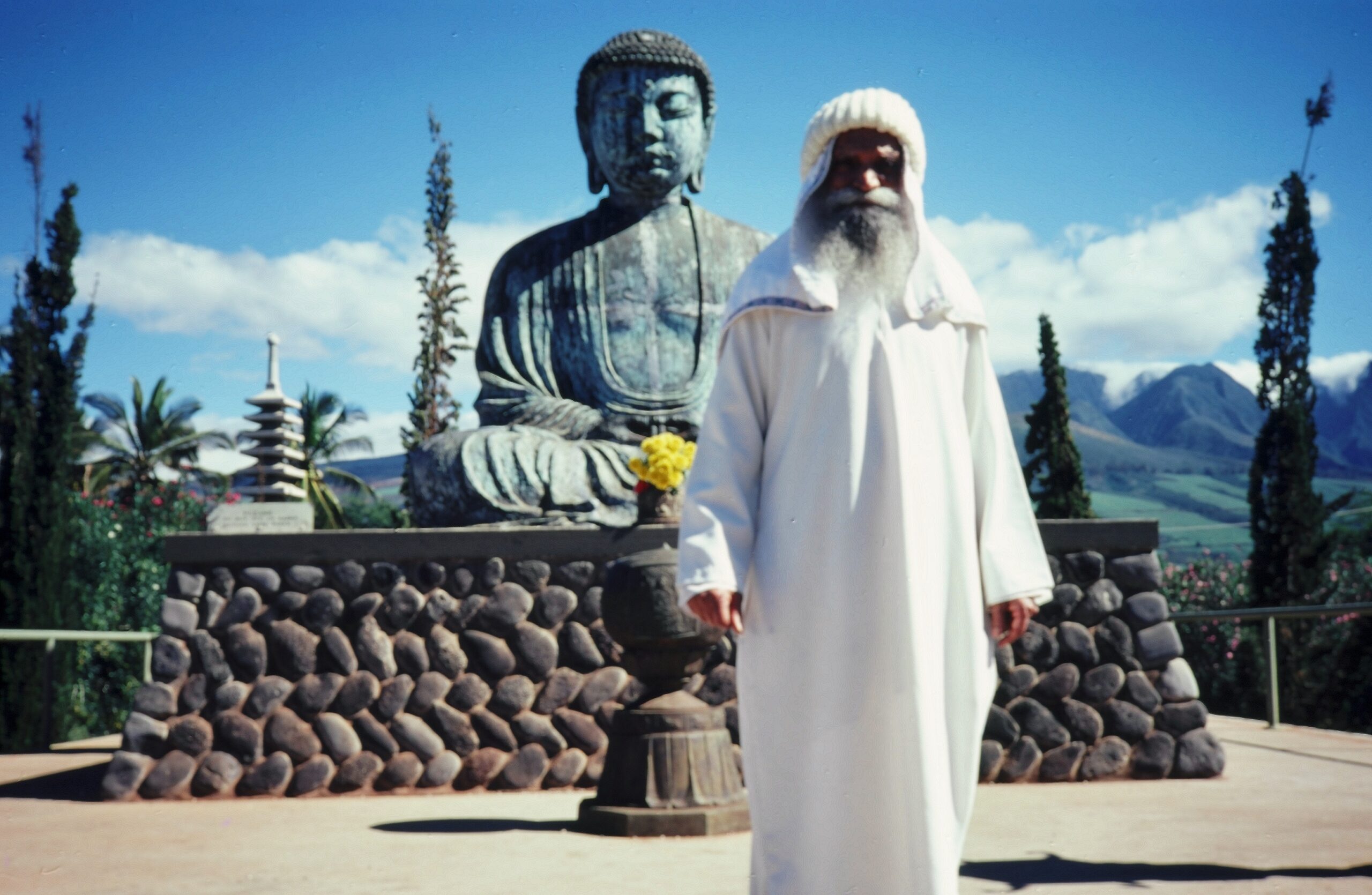 May this revelatory vision story help us remember that
everyone and everything everywhere is Divine and Holy!
And that the enduring happiness we all (knowingly or unknowingly) seek
is never found in superfluous diversions, possessions or pleasures,
but ever abides within our hearts and souls, as the Eternal light of LOVE.


And so shall it be!