“In essence there is and always has been only one spiritual teaching,
although it comes in many forms.”
~ Eckhart Tolle – The Power of Now

“A true spiritual teacher does not have anything to teach in the conventional sense of the word, does not have anything to give or add to you, such as new information, beliefs, or rules of conduct. The only function of such a teacher is to help you remove that which separates you from the truth …
The words are no more than signposts.”
~ Eckhart Tolle – Stillness Speaks 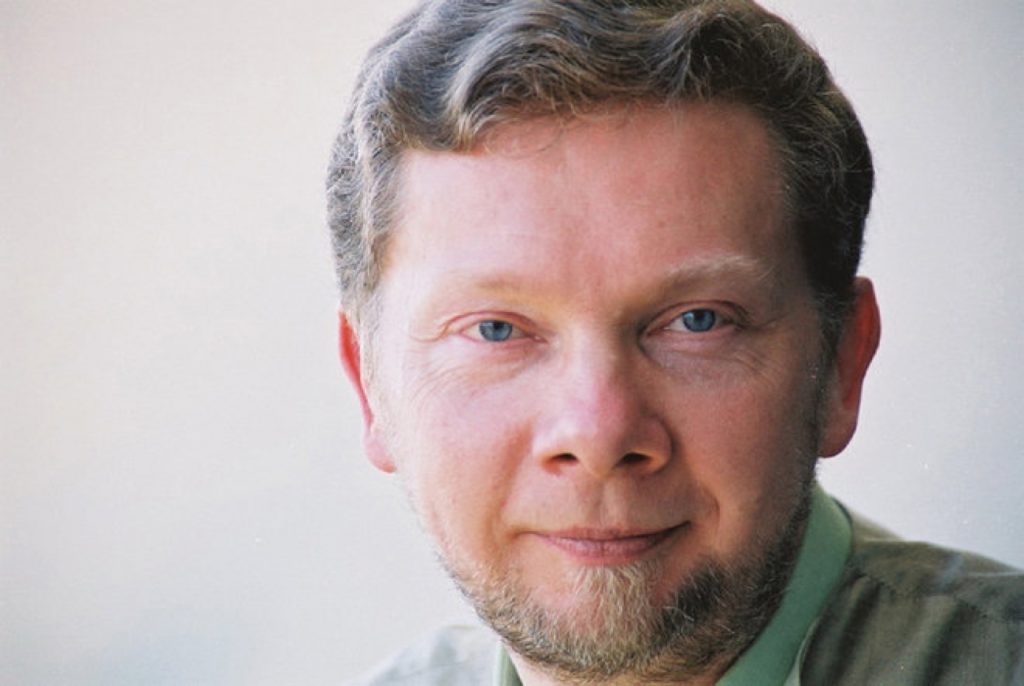 Eckhart Tolle is an influential contemporary spiritual writer and teacher, whose teachings have reached millions worldwide. On the brink of suicide, at age 29 Tolle had a miraculous spiritual awakening which ended his lifelong psychological sufferings and suicidal thoughts, rather than his precious human life. Thereafter he synchronistically became renowned as a spiritual teacher and author of The Power of Now and other noteworthy books.

I first discovered Tolle only after I had transitioned from a “born again Hindu” life phase to becoming an “uncertain Undo” – relying on inner rather than outer authority. (see e.g. “I’ve Found A Faith-Based Life”)

By then, I understood and appreciated the authenticity of Tolle’s spiritual awakening story, and the cogency of his teachings, which are now often quoted on SillySutras.com.

Tolle’s transformative epiphany was triggered by the profoundly simple insight that he wasn’t his constant negative thoughts, but the timeless awareness/witness and matrix of those thoughts.

Especially in this age of mental malaise when countless millions of people suffer from deep despondency and depression, and suicides are rife, Eckhart Tolle’s inspiring near-suicide spiritual awakening story can help those of us feeling despondent or psychologically challenged find inner peace by self-identifying as eternal universal awareness, rather than ego-mind’s “voice in the head”.

So Eckhart Tolle’s history and authentic awakening story are posted below to help inspire our crucially important Self discovery that we are eternal awareness; not mere mortal entities suffering from mistaken ego-mind self identification. And I enthusiastically encourage deep reflection upon it.

Tolle’s History of Anxiety, Fear and Depression Before His Spiritual Awakening.

Tölle was born on February 16, 1948 in Lünen, a small German town near Dortmund in the Ruhr Valley. He grew up in a dysfunctional household, where his incompatible Catholic parents were constantly bickering. Tölle’s early childhood was fraught with anxiety and fear, and he felt alienated from a perceived hostile school environment. Sometimes instead of going to school he would bicycle to the woods and sit amidst nature, which he loved.

Eventually his parents separated, and his father left Germany to live in Spain. Later, at the age of thirteen, Tölle moved to Spain to live with his father. In Spain, Tölle refused to go to school any longer. Though not rebellious he could no longer tolerate a hostile school environment. Tolle’s unconventional ‘open minded’ father did not insist that his son attend high school, and permitted him to elect home studies of literature, astronomy and various languages.

At the age fifteen, Tolle synchronistically received and read several books written by a German mystic known as Bô Yin Râ, which “very deeply” affected him. With an aptitude for languages, he quickly learned Spanish, English, and some French. Still, he spent much solitary time, free of the external pressures of the environment or the culture.

At age nineteen, about ten years before his “inner awakening”, Tölle moved to England, where he lived for about thirty years until emigrating to Canada in the mid-1990’s. During his first three years in England, he had no formal education, and supported himself by teaching German and Spanish at a London school for language studies.

Then, troubled by “depression, anxiety and fear”, he began “searching for answers” which he believed he could find only through intellect rather than intuition.

In his early twenties, Tolle decided to pursue his search by studying philosophy, psychology, and literature. After taking preparatory evening classes, he was ‘fast-tracked’ and permitted to enroll in the University of London. Upon graduating, he was offered and accepted a scholarship to do postgraduate research. Soon thereafter, at age twenty nine, he experienced a profound spiritual awakening and dropped out of academic studies.

Tolle’s Spiritual Awakening Story.
(Excerpted from The Power of Now: A Guide To Spiritual Enlightenment )

Until my thirtieth year, I lived in a state of almost continuous anxiety interspersed with periods of suicidal depression. It feels now as if I am talking about some past lifetime or somebody else’s life.

One night not long after my twenty-ninth birthday, I woke up in the early hours with a feeling of absolute dread. I had woken up with such a feeling many times before, but this time it was more intense than it had ever been. The silence of the night, the vague outlines of the furniture in the dark room, the distant noise of a passing train – everything felt so alien, so hostile, and so utterly meaningless that it created in me a deep loathing of the world. The most loathsome thing of all, however, was my own existence. What was the point in continuing to live with this burden of misery? Why carry on with this continuous struggle? I could feel that a deep longing for annihilation, for nonexistence, was now becoming much stronger than the instinctive desire to continue to live.

I was so stunned by this strange realization that my mind stopped. I was fully conscious, but there were no more thoughts. Then I felt drawn into what seemed like a vortex of energy. It was a slow movement at first and then accelerated. I was gripped by an intense fear, and my body started to shake. I heard the words “resist nothing,” as if spoken inside my chest. I could feel myself being sucked into a void. It felt as if the void was inside myself rather than outside. Suddenly, there was no more fear, and I let myself fall into that void. I have no recollection of what happened after that.

I was awakened by the chirping of a bird outside the window. I had never heard such a sound before. My eyes were still closed, and I saw the image of a precious diamond. Yes, if a diamond could make a sound, this is what it would be like. I Opened my eyes. The first light of dawn was filtering through the curtains. Without any thought, I felt, I knew, that there is infinitely more to light than we realize. That soft luminosity filtering through the curtains was love itself. Tears came into my eyes. I got up and walked around the room. I recognized the room, and yet I knew that I had never truly seen it before. Everything was fresh and pristine, as if it had just come into existence. I picked up things, a pencil, an empty bottle, marveling at the beauty and aliveness of it all.

That day I walked around the city in utter amazement at the miracle of life on earth, as if I had just been born into this world.

For the next five months, I lived in a state of uninterrupted deep peace and bliss. After that, it diminished somewhat in intensity, or perhaps it just seemed to because it became my natural state. I could still function in the world, although I realized that nothing I ever did could possibly add anything to what I already had.

I knew, of course, that something profoundly significant had happened to me, but I didn’t understand it at all. It wasn’t until several years later, after I had read spiritual texts and spent time with spiritual teachers, that I realized that what everybody was looking for had already happened to me. I understood that the intense pressure of suffering that night must have forced my consciousness to withdraw from its identification with the unhappy and deeply fearful self, which is ultimately a fiction of the mind. This withdrawal must have been so complete that this false, suffering self immediately collapsed, just as if a plug had been pulled out of an inflatable toy. What was left then was my true nature as the ever-present I am: consciousness in its pure state prior to identification with form. Later I also learned to go into that inner timeless and deathless realm that I had originally perceived as a void and remain fully conscious. I dwelt in states of such indescribable bliss and sacredness that even the original experience I just described pales in comparison. A time came when, for a while, I was left with nothing on the physical plane. I had no relationships, no job, no home, no socially defined identity. I spent almost two years sitting on park benches in a state of the most intense joy.

But even the most beautiful experiences come and go. More fundamental, perhaps, than any experience is the undercurrent of peace that has never left me since then. Sometimes it is very strong, almost palpable, and others can feel it too. At other times, it is somewhere in the background, like a distant melody.

Later, people would occasionally come up to me and say: “I want what you have. Can you give it to me, or show me how to get it?” And I would say: “You have it already. You just can’t feel it because your mind is making too much noise.”

Tolle’s profound awakening experience credibly demonstrates how our greatest fears and sufferings can hide our highest potentials, yet provide immense evolutionary opportunities – revealing that beyond our minds we can find intuitive fulfillment of our deepest aspirations for love, peace and joy, and realization of previously unimagined human potentials.

Tolle’s teachings focus on transforming self identity “from being the content of [the] mind to being the awareness in the background”. While Tolle says he experienced a permanent awakening to Self-identity as awareness, such one-time epiphanies are extremely rare. However, numerous people’s mystical awakening experiences – like mine – can trigger a gradual transformative process of evolutionary purification and ego attrition, with ever increasing benefits.

At age forty two – like Tolle – I experienced previously unimagined and transformative Self identity as universal Awareness, followed by unprecedented experiences of peace and ecstasy. But my mistaken ego-mind identity was not thereby permanently dissolved, and it kept recurring. Therefore, instead of experiencing permanent peace of mind, I have been enjoying gradual ego attrition with ever growing happiness and fulfillment. So today I am happier than ever before, but still learning and transforming.

At the time of Tolle’s awakening experience he was largely unfamiliar with spiritual texts and spiritual teachers. But after exploring such literature for several years, he concluded “that what everybody was looking for had already happened to me.” And that: “In essence there is and always has been only one spiritual teaching, although it comes in many forms.”

Intuitively I regard Tolle as authentic and well-intentioned. So I endorse his teachings as valuable and have posted them on SillySutras.com. to help others.

For example, I have especially appreciated Tolle’s humble and intriguing above introduction to his excellent second book, Stillness Speaks:

Moral of the Story and Invocation.

May the foregoing stories and teachings help inspire and point the way for discovery of our true spiritual Self-identity.

May everyone, everywhere be peaceful and happy!