“If there is love in your heart,
you don’t have to worry about rules.”
~ Shri Dhyanyogi Madhusudandas

“Truth is a pathless land,
and you cannot approach it by any path whatsoever,
by any religion, by any sect.”
~ J. Krishnamurti

“Religion is confining and imprisoning and toxic because it is based on ideology and dogma. But spirituality is redeeming and universal.”
~ Deepak Chopra

“Your daily life is your temple and your religion.”
~ Kahlil Gibran ~ “The Prophet”

“Love said to me,
there is nothing that is not me.
Be silent.”
~ Rumi 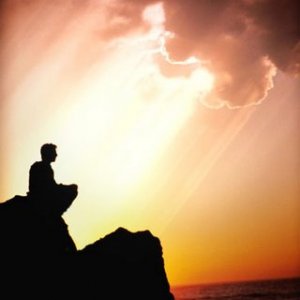 The Devil was taking his principal disciple on a world teaching tour.  They reached a remote place in the Indian Himalayas, when together they observed an extraordinary event.

Suddenly, a yogi in deep meditation emanated an enormous aura of amazing white light.  Seeing this, the Devil danced with glee.

His puzzled disciple inquired: “Master what has happened?”

The Devil responded: “He has realized the Eternal Truth and become enlightened.”

“Then why are you so gleeful?” asked the bewildered disciple.

“Because he will attract many followers, and we are going to organize them”, explained the Devil.


Moral of the story:

Spiritual Truth cannot be organized, it must be experienced.

Words cannot communicate inner realizations of “enlightened” sages – they only may point the Way, like maps.

Jesus, Buddha, Moses, Mohamed, Lao Tzu, Rumi and other sages and prophets, realized ONE inexpressible divine Truth, which must be experienced to be Known.

But, paradoxically, some fundamentalist followers of ‘religious’ institutions organized to teach universal “Truth” realized by Great Beings have perpetuated fearful and false ego ideas of separateness, which the sages transcended.

Thus, throughout human history countless people and other precious life forms – all manifestations of ONE God or Infinite Intelligence – have been victims of wars, crusades, inquisitions, genocides, and persecutions initiated by fundamentalists in the name of their “true” religion or God.

Now let us realize, at long last, that in Essence we are not separate;
that we are all manifestations of the same Divine Spirit or Self –
which is LOVE!

So, together, let us live Life as LOVE!

Soon after launching SillySutras.com I composed and published the foregoing Satan’s celebration whimsical spiritual teaching story, which reflected my ideas about some fundamentalist followers of hierarchical (‘top down’ ) religious organizations. It was intended to emphasize that spiritual Truth cannot be organized, but must be experienced; and that for spiritual evolution our loving behaviors are much more important and beneficial than our fearful religious beliefs.

Thus, throughout human history countless people and other precious life forms – all manifestations of ONE God or Infinite Intelligence – have been victims of wars, crusades, inquisitions, genocides, and persecutions initiated or perpetrated by fundamentalists in the name of their “true” religion or God.

Since composing the Satan’s celebration parable, my perspectives have broadened. It now seems to me that ‘Satanic insanity’ influences human organizations and individuals everywhere – not merely through some members of religious organizations, but worldwide throughout our societies in oligopoly-dominated financial, political, governmental, corporate, publishing, media, and other organizations.

From my present perspective, we are living in an insanely Orwellian world in which human psychopathy now threatens all life on Earth with imminent climate collapse or omnicidal nuclear catastrophe, because of ‘advances’ in technology without morality.

Hence, humankind urgently needs to stop the psychopathic behaviors which have spawned immense misery and even threaten all Earth life as we have known it. As the Dalai Lama has observed, it now seems urgently imperative that humans find and practice basic universal morality and ethics that are “beyond religion”.

Above all, we must do no harm, and compassionately treat all beings with the same dignity we wish for ourselves, and that they wish for themselves; and we must do all in our power to prevent insanely unsustainable despoliation or destruction of life on our precious planet. (See https://sillysutras.com/go-for-the-gold-the-golden-rule-for-a-golden-age/ )

Accordingly, I have republished the above Satan’s celebration parable hereby explaining the urgent pertinence of these Golden Rule principles to current turbulent times, and to emphasize our imperative need to pursue universal Truth and morality as an undivided global family, regardless of our religious or other beliefs.

Here are statements from the Dalai Lama and Pope Francis which reflect these views:

“There is no religion higher than the Truth. …
What really is important is our behavior with peers, family, work, community, and in the world. ….
Whether or not we follow a religion, what is important is that
we become more compassionate, more sensible, more detached, more loving, more humanitarian, more responsible, more ethical.”
~ Dalai Lama – https://sillysutras.com/your-religion-is-not-important/

“When one realizes that life, even in the midst of so many contradictions, is a gift, that LOVE is the source and the meaning of life, how can they withhold their urge to do good to another fellow being?”
“We all need each other, none of us is an island,
an autonomous and independent “I,” separated from the other . . we can only build the future by standing together, including everyone”. .
“Everything is connected, and we need to restore our connections to a healthy state.”
“We have so much to do, and we must do it together.”
~ Pope Francis – 2017 TED Talk – https://sillysutras.com/reflections-on-religious-beliefs/


So regardless of our religious or other beliefs,
let us pursue universal Truth and morality as an undivided global family;

Together, let us live Life as LOVE!