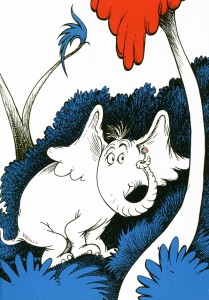 Horton Hears a Who

“[Self] Realization is of the fact that you are not a person.”
“You are THAT!”
~ Nisargadatta Maharaj 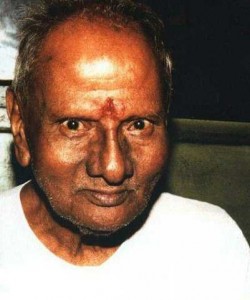 When is a person no person at all?

Q. Doesn’t everyone think they’re a “person” –
whether tiny or tall;

Does anyone think they’re no person at all?

A. Nobody thinks that they’re anyone – tiny or tall,
when they don’t think anything – anything at all.

Q. But when they’re not thinking,
who are they?

And who am I? And who are you?

A. To realize that we must stop thinking,too!

Ron’s comments and recitation of “Who’s a Who, and Who are You?”

Ron’s explanation of “Who’s a Who, and Who are You?”

Since launching the Silly Sutras website I have posted many writings – aphorisms, quotations, poems and essays – about Eastern non-dualism philosophy, which I accept as highest spiritual teachings. Paradoxically these writings point to an ultimate Truth which cannot be expressed in words, but only suggested silently – like the Buddha pointing to the moon. 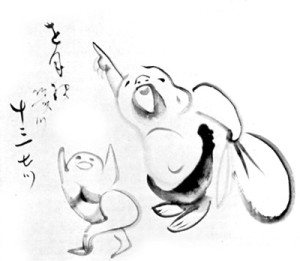 Thus, sometimes we may best communicate wordlessly with silent gestures, pantomime, looks or tears; or auditorily with laughter, tunes, or music.

With words, Truth is sometimes best expressed with jest – whimsically, humorously or paradoxically.

The foregoing poem “Who’s a Who, and Who are You?” was composed to both whimsically and paradoxically point to ineffable Absolute non-duality Reality.

Einstein told us that our space/time duality reality is a persistent mental illusion – a way of thinking. Similarly, for millennia mystical inner explorers have revealed the ever illusionary nature of our impermanent relative ‘reality’ – calling it (in Sanskrit) “maya” or “samsara” – which the Buddha likened to a mental mirage.

In sutra sayings I have paradoxically proclaimed that:

that it is just a mental movie – a holographically, fractally, and kaleidoscopically projected ‘theater of the mind’.

In composing “Who’s a Who, and Who are You?” I have attempted to express paradoxically and whimsically how Dr. Seuss might point from space/time to Ultimate non-duality Reality.

I hope we can get the ‘point’; or at least begin to wonder what it means.