“Be melting snow.
Wash yourself of yourself.”
~ Rumi

“Love is the water of life,
jump into this water.”
~ Rumi

“To understand water is to understand the cosmos,
the marvels of nature, and life itself.”
~ Masaru Emoto 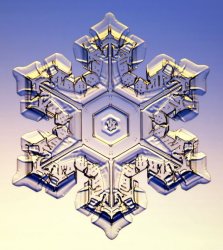 Hydrologic Logic: What People Can Learn From Snowflakes

Perennial wisdom says we can learn about ourselves by closely observing all of Nature’s manifestations and processes.

“As above, so below; as below, so above.”
~ The Kybalion, Hermetic axiom

“Look deep into nature, and then you will understand everything better.”
~ Albert Einstein

So, what can we learn about ourselves by studying snowflakes and hydrologic processes?

Science tells us that though countless trillions of snowflakes have fallen on earth each has a unique form; that each snowflake is an hexagonally symmetrical crystalline form which begins around a tiny speck of dust – as each pearl forms around a sand particle – but that no two snowflakes are exactly alike.

Yet, despite this wondrous and unimaginable diversity of forms, all snowflakes have a common essence – frozen water – H20.

When a snowflake melts, it returns to and merges with its watery source, which is perpetually recycled. So, each snowflake’s essence is the same – recycled water, which has formed countless unique prior snowflakes.

Not only do miraculously unique snowflakes originate from their common watery essence, but science says that such essence is indestructible. Water – a liquid – is a form of ‘matter’ which is merely manifest energy: E=mc2. And energy can’t be destroyed. It just recycles endlessly from formlessness to differing forms and phenomena. So, in their essence, snowflakes are immortal energy.

Like miraculously unique snowflakes, each of the countless humans who has inhabited Earth has had a unique form and genetic makeup. Like snowflakes, human physical bodies are composed of common elemental earth constituents, including mostly water. People’s physical bodies – like snowflakes – appear for a twinkling of time, die and ‘melt’ back into the watery Earth.

But, presumably unlike snowflakes, each of us is aware of our environment and of our life’s experiences; and this awareness is our entire existence. So, while unique snowflakes are united in glorious diversity by their common watery essence, physically unique human beings, are unified not only by their common elemental earthly constituents but, also, by their by their common essence – consciousness, which is the sole context of human beingness.

Snowflakes appear in Nature and, apparently, are peacefully at one with Nature until they disappear. Humans appear in Nature but – unlike snowflakes – we have great intelligence and we think a lot. And through thought we identify ourselves as our perceived separate forms. Thus, we think that we are entities “condemned” by nature to inevitable bodily death. But we don’t know what will happen to us upon such death.

So, we become afraid of dying; of giving up the known for the unknown. And, through thought, we try to “protect” and preserve our ephemeral physical forms and to deter or psychologically deny their inevitable demise. Accordingly, our lives are often marked by mental afflictions causing conflicts, problems and suffering, which disturb our peace and awareness of at-one-ment with Nature.

What people can learn from snowflakes

Q. So, what can people learn from snowflakes?

A. To let go and ‘go with the flow’; to ‘cool it’ and to not worry about our inevitable disappearance.

We can realize that we are much more than our unique physical forms, or our thoughts. That like snowflakes we are inextricably interdependent essential elements of Nature; that Nature is our nature, until we melt into Mystery and disappear into Nature’s Eternal Essence.

Realizing this, we can begin more and more to self-identify with Nature as our immortal Essence rather than with our ephemeral forms and thoughts; and, gradually, we can expand our perceived boundaries, to ever evolve as these boundaries dissolve.

Thus, we can more and more live with less and less anxiety, fear and worry. Though in this life we may never totally transcend entity identity, often we can just be at peace – as immortal awareness.

“As we lose our fear, Of leaving life, We shall gain the art of living life.”

And – like snowflakes – maybe some day we’ll be ‘recycled’ some way. e.g. http://www.victorzammit.com/Whenwedie/whatdoeshappen.htm

Or maybe not. e.g. http://tinyurl.com/mlw6erq

In all events, – like snowflakes – we need not worry about leaving. For

“It is in dying [to ego life] that we are reborn to Eternal Life.”
~ Saint Francis of Assisi, peace prayer

People can learn from snowflakes to let go and go with Nature’s flow, until we become immortal; we can learn that

“Life is a series of natural and spontaneous changes. Don’t resist them; that only creates sorrow. Let reality be reality. Let things flow naturally forward in whatever way they like.”
~ Lao Tzu

“The dewdrop belongs to the sea. Separated, it is vulnerable to the sun and wind and other elements of nature; but when the droplet returns its source, it becomes magnified in oneness with the sea. So it is with your life. United to God you become immortal.’
~ Paramahansa Yogananda

So, as elements of Nature, we need not worry, and can be happy and peaceful as we melt into our immortal Source – like snowflakes!

In recent messages and postings I’ve optimistically opined that the current coronavirus pandemic emergency has given us an unprecedented opportunity to co-create a new and wonderful world of happiness, harmony and health for everyone everywhere.  And I’ve tried to suggest how that can happen, if we follow our hearts, instead of being paralyzed by propaganda provoked fear and panic.

Did you know that the Earth is 70 percent water, and that people are 70 percent water; and, that according to NASA, “Water is the fundamental ingredient for life on Earth” ?

The foregoing essay was originally inspired by the ancient hermetic axiom, ‘as above, so below’ and by advice of my Guruji and other wisdom teachers to learn from Nature. Later in 2004, via the film “What the Bleep Do We Know?”, I was deeply impressed on discovering the pioneering research of Dr. Masaru Emoto whose astonishing discoveries, documented photographically, have led to awakened awareness about water as Earth’s most precious resource.

Dr. Emoto discovered that molecules of water are affected by our thoughts, words, and feelings, so that that humans can positively impact the earth and our personal health through loving, grateful and harmonious attitudes and actions, especially with attention to water; that since the Earth is 70 percent water and people are 70 percent water, he theorized that we can heal our planet and ourselves by consciously expressing love and goodwill to and through water.

He explained and demonstrated that crystals formed in frozen water reveal changes when specific concentrated thoughts are directed toward them; that water from clear springs and water that has been exposed to loving words shows brilliant, complex, and colorful hexagonal snowflake patterns, whereas polluted water, or water exposed to anger or other negative thoughts, forms incomplete, asymmetrical patterns with dull colors.

Also Dr. Emoto described the ability of water – like a liquid computer – to absorb, hold, and even retransmit human feelings and emotions. Using high-speed photography, he found that crystals formed in frozen water reveal changes when specific, concentrated thoughts are directed toward it. Music, visual images, words written on paper, and photographs also have an impact on the crystalline structures. These methods even experimentally worked on asymmetrical Tokyo tap water. Dr. Emoto theorized that since water has the ability to receive a wide range of frequencies, it can also reflect the universe in this manner.

Especially in these unprecedented times of worldwide pandemic panic when insanely delusional human behaviors imminently threaten Earth-life as we have known it, we have unprecedented opportunity to gratefully and lovingly cherish and harmoniously heal our precious watery world, which appears blue from outer space, and was thus eloquently described by legendary astronomer Carl Sagan as a “pale blue dot” in this vast universe.

Instead of being paralyzed by fear and panic, may we follow our hearts, rather than unfounded official edicts, to collectively and cooperatively realize an abiding “new normal” era of cooperation, harmony and peace on our precious planet.

So let us gratefully and lovingly be guided by these wise words from Paramahansa Yogananda:

“Every day should be a day of Thanksgiving for all the gifts of Life — sunshine, water, the luscious fruits and greens, which we receive as indirect gifts from the Great Giver.”

“Affirm divine calmness and peace, and send out only thoughts of love and goodwill if you want to live in peace and harmony.
Never get angry, for anger poisons your system.”


“The Secret Life of Water”

Embedded below are three brief videos:
A memorable two minute scene from “What the Bleep Do We Know?”;
A one minute+ video showing hexagonal crystals forming in Tokyo tap water;
And a beautiful nine minute video with healing music, watery photography, and with words from Dr. Emoto titled “The Secret Life of Water” . ENJOY!