“One day, it was suddenly revealed to me that everything is pure spirit.”
~ Sri Ramakrishna Paramahansa

“Yes, all one’s confusion comes to an end if one only realizes that it is God who manifests Himself as the atheist and the believer, the good and the bad, the real and the unreal; that it is He who is present in waking and in sleep; and that He is beyond all these.” …. “God alone is the Doer. Everything happens by His will.”
~ Sri Ramakrishna Paramahansa

You may try thousands of times, but nothing can be achieved without God’s grace. One cannot see God without His grace. Is it an easy thing to receive grace? One must altogether renounce egotism; one cannot see God as long as one feels, ‘I am the doer.’
~ Sri Ramakrishna Paramahamsa 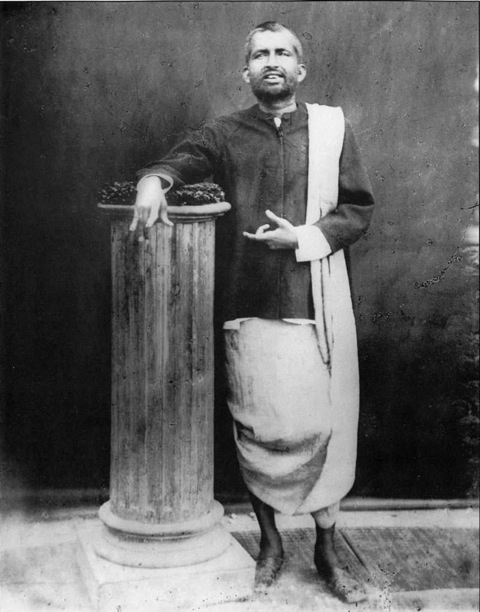 Introduction to Sri Ramakrishna’s Teachings About God in All Beings

This memoirs posting includes explanations and quotations demonstrating how Sri Ramakrishna’s timeless teachings about God in all beings, philosophically and pragmatically augmented and transcended ancient non-dualism ego teachings of Buddhism and Taoism.

It supplements prior general postings which explain how the ego–mind’s illusion of separation from non-dual spiritual Source causes inevitable karmic suffering. It is also related to recent memoirs postings about Sri Ramakrishna’s teachings that explain (with quotation collections) his key general teachings, and his specific teachings that God (as sole Doer or cause) can be seen in all manifestation. (See: “Sri Ramakrishna’s Timeless Wisdom”; “Seeing God”; and “Transcending Ego-Suffering.”)

In other memoirs postings I’ve told how at age 76 my quest for meaning of a transformative out-of-body [OOB] experience was rewarded with an extraordinary spiritual re-awakening and rebirth which began a profound spiritual evolution process, with previously unimagined discoveries which are still unfolding at almost age ninety.

I’ve recounted that, as as secular Hebrew litigation lawyer, in 1978 I met my beloved Guruji, Shri Dhyanyogi Madhusudandas, a hundred year old self-realized Hindu holy man; and that I became a devotional “born-again Hindu” after receiving his shaktipat initiation, which created our inseparable causal connection through which he has ever since guided me spiritually.

After initiation I learned that Guruji’s Self-Realization had been prophesied and encouraged by his rare inner vision of Swami Vivekananda, the designated successor of Sri Ramakrishna Paramahansa, nineteenth century Hindu sage and Avatar. Though as an itinerant yogi, Guruji had read very few spiritual texts or scriptures, he was greatly inspired by Swami Vivekananda’s Raj Yoga book and writings about Patanjeli’s Yoga Sutras, which Guruji recommended.

Upon learning of those teachings I too became extremely inspired by Sri Ramakrishna Paramahansa and Swami Vivekananda’s Vedanta teachings, which have helped me more than any other written spiritual teachings. Accordingly, in prior memoirs chapters I have told generally about discovering those timeless teachings, and about Sri Ramakrisha’s “Seeing God” in all beings.

And in “Discovering The Inner Spirit Of ’76” I’ve recently concluded that it’s crucially important for us to always emanate energies of Divine Light and LOVE, because the energy of Divine Love always prevails over fearful energy, which can be “our greatest inner enemy”.

The following memoirs chapter explains how Sri Ramakrishna’s Teachings About God in All Beings have advanced our spiritual evolution process by helping us realize and remember that – even in this illusory 3D space/time world of samsara or maya (where some separate ego-identity is inevitable and unavoidable) – we only perceive Divine spirit or God. Such remembrance that everything is Holy helps us serve as crucially important instruments of Divine Light and LOVE, which always prevails over fear.

Ancient Eastern non-dualism teachings of Advaita-Vedanta Hinduism, Buddhism, and Taoism all identify (as humanity’s spiritual goal) Self-Realization through a deep state consciousness dissolving ego-mind illusion of separation from ONE Spiritual Source. They are our most evolved and elevated spiritual philosophies.

These Eastern philosophies (which I have accepted) all recognize “ego” as the greatest impediment to Self-Realization, and define it as illusory mental separation from non-dual Ultimate Reality. Only in the past century has ancient non-duality philosophy been scientifically validated by Albert Einstein’s revolutionary relativity realization, that everything is energy (e=mc²), so that:

“Reality is merely an illusion, albeit a very persistent one.”;
“Our separation of each other is an optical illusion of consciousness”; and
“Space and time are not conditions in which we live, they are modes in which we think”.

Although all Eastern non-dualists broadly agree about the dangers of “ego”, there are subtle philosophical differences between them, which are unknown and unintelligible for most common people. However the doctrinal differences between Hindu and Buddhist non-dualists may soon prove pragmatically important because of Sri Ramakrishna’s revelations that incarnate ego is unavoidable, even after Self-Realization of God.

In deepest meditation (nirvikalpa samādhi) Sri Ramakrishna’s ego-mind individuality dissolved and merged thoughtlessly and formlessly with universal Divine Reality – Brahman. Thereafter, on returning to individual bodily consciousness from this state of Self-Realization (moksha), he taught that God (as sole Doer or cause) can be seen in all manifestation. Sri Ramakrisha could have remained eternally merged with the Divine. But he elected to return to his mortal body to help humanity realize our timeless Divinity, beyond inevitable suffering from deceptive ego-mind illusions of being separate from ONE God.

Although Sri Ramakrisha realized that ego dissolves in nirvikalpa samādhi, he also realized that as long as humans choose to physically incarnate some ego-identity is inevitable and unavoidable.

“The ego cannot be done away with. As long as ‘I-consciousness’ exists, living beings and the universe must also exist.
After realizing God, one sees that, it is He Himself
who has become the universe and the living beings.”

“The ego does not vanish altogether.
The man coming down from samādhi perceives that
it is Brahman that has become the ego, the universe, and all living beings.”
~ Sri Ramakrishna Paramahamsa

So he taught that egos can be either harmful or helpful:

That when we devote our precious human lives to serving others our egos are helpful; but that they are harmful when we are fearful, materialistic, or hedonistic. (Eg. see Bhagavad Gita, Chapter 6:05-6)

Thus Sri Ramakrisha demonstrated and taught the desirability of maintaining a helpful ego of service or devotion to God in our worldly activities. Those teachings of dedicating our lives to God, may be more important now than ever before (during the unprecedented current violent post-pandemic “new reality” era) because countless humans worldwide are now awakening from eons of harmful illusionary ego self-identification and limitation to higher energy levels of consciousness, beyond fears of death or deprivation as supposedly threatened mortal and limited life-forms.

Until now, such fearful ego-mind energies have psychologically ‘imprisoned’ us in illusionary energetically lower consciousness dimensions where we’ve suffered for eons. But a “critical mass” of humankind are rapidly awakening from those fearful illusions to elevated loving and compassionate levels of awareness, beyond such suffering. Thus we are remembering and realizing the crucial importance of compassionately caring for one-another and all of Nature’s life-forms.

And as fearless servants and instruments of Divine LOVE we are invariably destined to ultimately enjoy our innate God-given freedom from all inner-ego oppression.

This memoirs posting is dedicated to hastening that inevitable transformation when we shall melt and merge into ONE Universal Awareness – as Divine LOVE.

Until then may we ever BE ‘givers not getters’, and pray:

“Infuse us, enthuse us, and use us, to bless all life as Love!”