“Everything is determined, the beginning as well as the end,
by forces over which we have no control.
It is determined for the insect, as well as for the star.
Human beings, vegetables, or cosmic dust,
we all dance to a mysterious tune,
intoned in the distance by an invisible piper.” . . . .
“Human beings in their thinking, feeling and acting are not free but are as causally bound as the stars in their motions.”
~ Albert Einstein

“The assumption of an absolute determinism is the essential foundation of every scientific enquiry.”
~ Max Planck

Q. “Are only the important events in a man’s life,
such as his main occupation or profession, predetermined,
or are trifling acts also, such as taking a cup of water or
moving from one part of the room to another?”
A.  “Everything is predetermined.”
~ Ramana Maharshi

“[T]here cannot be any such thing as free will; the very words are a contradiction, because will is what we know and everything that we know is within our universe, and everything within our universe is moulded by the conditions of space, time, and causation. Everything that we know, or can possibly know, must be subject to causation, and that which obeys the law of causation cannot be free.”
“The only way to come out of bondage is to go beyond the limitations of law, to go beyond causation.”
“This is the goal of the Vedantin, to attain freedom while living.”
~ Swami Vivekananda – Karma Yoga

“In Hinduism, the very idea of free will is non-existent,
so there is no word for it.
Will is commitment, fixation, bondage.” . . . .
“To be free in the world you must be free of the world.
Otherwise your past decides for you and your future.”
~ Nisargadatta Maharaj

“There is only one central issue, crisis, or challenge for man,
which is, that he must be completely free.
As long as the mind is holding on to a structure, a method, a system, there is no freedom.”
~ J. Krishnamurti

“Every Cause has its Effect;
every Effect has its Cause;
everything happens according to Law;
Chance is but a name for Law not recognized;
there are many planes of causation,
but nothing escapes the Law.”
~ The Kybalion

“Every action, every thought, reaps its own corresponding rewards.
Human suffering is not a sign of God’s, or Nature’s, anger with mankind.
It is a sign, rather, of man’s ignorance of divine law. . . .
Such is the law of karma: As you sow, so shall you reap.
If you sow evil, you will reap evil in the form of suffering.
And if you sow goodness, you will reap goodness in the form of inner joy.”
~ Paramhansa Yogananda

“It is true that we are not bound.
That is to say, the real Self has no bondage.
And it is true that you will eventually return to your Source.
But meanwhile, if you commit sins, as you call them,
you have to face the consequences. You cannot escape them.”
~ Ramana Maharshi

“Nothing perceivable is real. Your attachment is your bondage.
You cannot control the future.
There is no such thing as free will. Will is bondage.
You identify yourself with your desires and become their slave.”
~ Nisargadatta Maharaj

“Free-will is a non-entity, a thing consisting of name alone.”
“The will of man without the grace of God is not free at all,
but is the permanent prisoner and bond-slave of evil since it cannot turn itself to good.”
“For grace is needed, and the help of grace is given, because “free-will” can do nothing.”
~ Martin Luther – The Bondage Of The Will

“The only difference between a human being and a stone rolling down a hill, is that the human being thinks he is in charge of his own destiny.”
~ Baruch Spinoza

“There is no such thing as chance;
and what seems to us merest accident
springs from the deepest source of destiny.”
~ Johann Friedrich Von Schiller 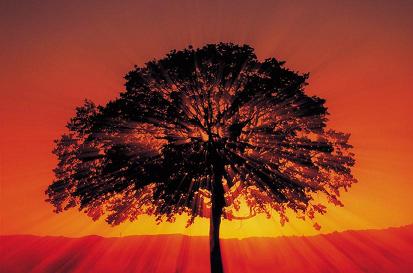 Free Will or Fate?

Q.  Do we have free will, or freedom of choice, or is our life predetermined or fated?

A.  Our experience of apparent freedom of choice or of predestiny depends on our evolutionary history and perspective.

In space/time ego/mind causality/reality, most “normal” people experience freedom of choice, and make decisions and plans about ostensible options in their lives. And some people consciously choose the attitude or state of mind with which they experience earth life. Because each person is unique, with a unique evolutionary perspective and personality, we each choose our life experiences differently. And as our self awareness becomes more focused, our free will powers increase.

But according to mystics, our belief in free will is ultimately illusory. For example, both Albert Einstein and Ramana Maharshi have asserted that every detail of worldly life “is predetermined.” And Swami Vivekananda told us that “free will” is a self-contradictory concept; that with worldly will there can be no freedom, which is always constrained by the universal law of cause and effect. Similarly, Vivekananda’s master, Ramakrishna Paramahansa, taught that

“God alone is the Doer.
Everything happens by His will.”

Enlightened saints, sages, shamans and mystics for millennia have reported attitudinally transcending this ever impermanent world reality, and experiencing it as an illusory play of consciousness, sometimes called ‘samsara’ or ‘maya’. Such masters do not self-identify mentally as only mere mortal embodied beings, but experientially as non-dual universal intelligence or spirit, which is the Source and essence of this ever impermanent world.

They report realizing experientially – as Albert Einstein explained scientifically – that:

“Reality is merely an illusion, albeit a very persistent one;” [that] “space and time are not conditions in which we live, they are modes in which we think”, and [that our separate self-identity] “is an optical illusion of consciousness.”

They define “freedom” as a timeless non-dual immutable spiritual Reality beyond thought or ego – beyond human comprehension, imagination, description or belief – which can only be known experientially, not mentally or rationally.

Thus, in space/time causality/reality, as long as we self-identify as supposedly separate entities distinct from the apparent objects of our perceptions, choices or intentions, we have apparent freedom of choice, until we transcend separate self-identity and experience existence as universal choiceless and timeless awareness, or consciousness without an object.  [*See footnote]

But, our ego/mind exercise of apparent freedom of choice creates karmic causes and conditions which can keep us believing in the “optical illusion” – that we are separate entities rather than ONE infinite Potentiality. And with the law of karma we reap as we sow. According to Swami Yogananda,

With Self realization there is transcendence of illusory separate self-identity; whereupon there remains only Being – only Infinite Potentiality – with no separate someone to will or intend or separately experience anything in time.

Thus, upon total transcendence of separate entity identity, there is no free will or free choice, nor is there time in which karmic fate or destiny unfolds –

*According to Eastern philosophies, Karma is universal law of cause and effect applied at subtle levels to everything we think, do or say during repeated reincarnations as supposedly separate beings. A similar concept is implicit in Western teachings that we reap as we sow [e.g. Galatians 6:7-9]

Ron’s Reflections on Free Will or Fate.

After my midlife change of life, I reconsidered all prior paradigms about self-identity, reality, free choice or predestiny, and began entertaining intriguing ideas about reincarnation and karma.   After experiencing my self-identity as universal consciousness, gradually I realized that space/time reality – which previously I had considered as the only reality – is an ever impermanent projection of universal intelligence which is the essence and matrix of all worldly phenomena.

But even though it appeared to me that “reality isn’t really real”, like all other “normal” people I’ve lived this lifetime mostly behaving as if this crazy space/time world is very real – yet  ever aware of a deep intuitive aspiration to be ‘in this world but not of this world’.  And I’ve never stopped wondering with great curiosity about how and why space/time reality was created and why we are here.

For example, on returning to San Francisco from a February 1977 miraculous week in New York  where I amazingly experienced many previously foreseen events, I began wondering:

“What is time?”
“Are there really any coincidences or accidents,
or is everything that happens to us predestined by laws of causation or karma?”
“Do we really have free will as most people believe?
And if so, what free will?”

Forty years since then, I am still uncertain about answers to those mysterious perennial questions.  But many aphorisms, essays and poems reflecting my theories, intuitions and speculations about them, are posted with apt quotations on SillySutras.com.

Thus I have posted the above quotations and Q and A essay about free will or fate, proposing that karmically and cosmically our lives are predetermined, but that morally we must live as if we have freedom of choice to heal the world.

I suggest that cosmically free will is an illusionary aspect of Nature’s predetermined evolutionary ‘incentive system’; that we are subjected to inevitable earthly sufferings which motivate us to transcend them by choosing to improve or peacefully accept our life’s circumstances.  Thus, I think that Nature’s determinism promotes evolution by fating us to make apparent choices, individually and collectively, which ultimately will advance human consciousness until we experientially realize our essential common self-identity beyond death as Infinite Potentiality – Universal spirit, Being, Awareness, Bliss, Eternal Life, Light, LOVE.

Mostly I agree with Einstein’s Mystical Views on Free Will or Determinism: that ‘God doesn’t play dice’, so

“Human beings in their thinking, feeling and acting are not free but are as causally bound as the stars in their motions.”
[* See commentary footnote]

Whether or not we agree with Einstein and rare mystics that what happens in space/time reality is like a preprogrammed dream predestined by mysterious karmic causes and conditions, I have found that assuming predestination, while always acting morally, can help us find happiness. We can experience ever growing peace of mind by more and more accepting each moment with the attitude that it could not be otherwise, and that it is happening in the best way and at the best time – as an evolutionary incentive and opportunity.

Gradually we can thereby accept inevitable difficulties as evolutionary opportunities, without remorse or regret about the past, or worry or fear of the future.  This attitude of assuming everything as predestined has helped me experience ever increasing equanimity and contentment, and to enjoy countless unplanned synchronistic meetings with ordinary people as ‘holy encounters’ with divine beings wearing ‘space/time soul suits’.

So, whether or not we believe in spiritual evolution or predestiny, I invite your careful consideration of the above quotations and essay.  I hope these ideas can help all of us find increasing happiness by accepting inevitable difficulties as evolutionary opportunities, and by finding blessings in unplanned events and interactions with others.

And if we do accept predestined karma, let us remember that
when we sow love, we harvest happiness.

Accordingly, (whether or not predestined) I invite you to join with me frequently in the heartfelt affirmation which appears atop every SillySutras.com page.

“Infuse us, enthuse us, and use us, to bless all life as Love!”